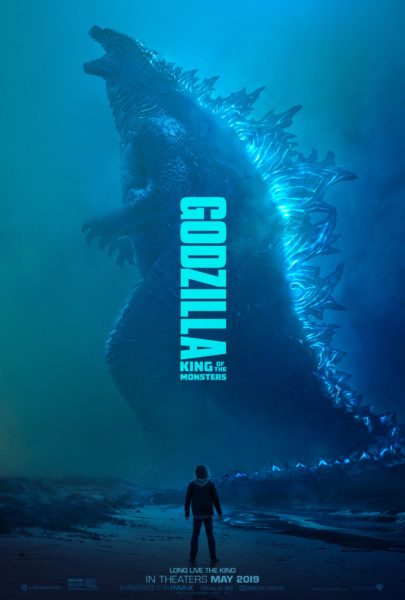 “Godzilla (2014)” opened to positive reviews and financial success, but it seems like its reputation has grown more divisive amongst the fandom since its release for a variety of reasons; ranging from the bait-and-switch action scenes to the flat characterizations. It seemed like the initial happy reaction was more out of relief that they made a Godzilla feature which was more respectful to the King of the Monsters than anything else. I have to admit that I suspected it wouldn’t hold up very well when I revisited it, but do you know what? I liked “Godzilla (2014)” just as much the second time around, which is a rarity for CGI-heavy blockbusters, as they usually lose at least some of their magic when being reformatted for a smaller screen. It’s just a solid, sturdy film that was upstaged by “Kong: Skull Island” and “Shin Godzilla“. Was I really eager for a sequel? Personally, I was more interested Toho regaining the rights so they could make their own movies again… and I almost wished they would just hurry up and give us “Godzilla Vs Kong“, but then the damned trailers had to drop and “Godzilla: King of the Monsters” suddenly was my most anticipated film of 2019. Holy shit — the marketing campaign was practically an art form in itself and… now that I’ve seen “Godzilla: King of the Monsters“… it’s a higher art form than the movie it was trying to sell…

“Godzilla: King of the Monsters” is in many ways a terrible movie, but in many ways is a perfect Godzilla movie… If you’re a fan of the franchise, then you will probably enjoy this, especially if you found its predecessor to be lacking. There is a lot more monster action, although half of the time, it seemed like the fighting was more of a backdrop to the human conflict. The CGI is usually very good, but once again… the filmmakers often have to hide it in smoke, cloud, snow or darkness. The music was what made the spectacle work for me though, as composer Bear MaCreary remixes a lot of the classic monster themes and they all sound amazing. The best scene in the movie for me was when Mothra transforms, as her motif starts playing in the background and the visuals fit seamlessly with the music. I just wish the movie had something more substantial for her to do, as she’s really only there for the sake of fanservice. Now that I think about, her function is more-or-less the same as it was in “Godzilla: Final Wars” — HOLY SHIT! MOTHRA GLUING GHIDORAH’S FACE TO A SKYSCRAPER WAS SO F@CKING COOL!!! Er, where was I? Oh yeah…

King Ghidorah was easily the scene stealer and as blasphemous as this might be, this was my favorite incarnation of the three headed dragon. He’s menacing, malevolent, is NOT being mind controlled by someone for once and has a distinct personality… or should I say personalities? I loved watching the heads bicker with each-other. One would nudge a human as if saying “aw, they’re so cute“, only for the alpha head to snap at it, as if angrily reminding it to stop playing with their food. Rodan has an interesting function within the story, but I suspect his new characterization will be divisive amongst fans. I liked his look though and even if his portrayal was not what I’d call faithful to the original characterization, it’s… different… Godzilla’s design remains the same and if you liked it there, you’ll like it here and if not, tough shit. I still think he looks fat, but the filmmakers do evoke a sense of tragedy and awe whenever the monster appears on-screen and the roar still gives me chills.

Some have complained that the monster effects feel weightless, because they’re so much more agile than they were in the 2014 film, but there were only a few scenes where they seemed far too quick for their size. For the most part, the action is framed from the perspective of a human, so they always looked big and heavy to me. The sound design deserves a lot of credit for this too, as the roaring and stomping was deafening. Yet there were times when the editing was pretty sloppy and I had absolutely no  clue as to what was happening. Godzilla occasionally seems to be standing in areas that probably shouldn’t support his weight, but the older movies did this too, so… HOLY BUTT JUICE! DID YOU SEE GODZILLA SLAM GHIDORAH’S HEAD INTO THE GROUND! SOOOOOO COOOOOOOL! Whoops, sorry! I forgot I’m supposed to be a critic… who makes critical observations — HOLY FECES ON A CHEEK SANDWICH, RODAN TACKLES GHIDORAH AND IT’S JUST LIKE THE ORIGINAL FILM! I CAN’T TAKE A.N.Y.M.O.R.E.A.W.E.S.O.M.E.!.!.!

“Godzilla: King of the Monsters” really does seem designed for the fanboys… and really, no one else… The movie will stop for a bombardment of exposition, so that someone can dramatically reveal… Ghidorah’s name! WHAT A SHOCKING TWIST! The most egregious example of confusing story with fanservice is when someone rushes through Mothra’s lore, with the grand reveal being… an Easter egg that leads nowhere important, beyond making fans say “Oh, I get it!“. As a fan myself, I can’t say I didn’t squee, but this is a very strange choice for a film that’s trying to appeal to mainstream audiences.

Godzilla fans are used to impatiently waiting for the monsters to show up, while the humans serve as hype men for the climactic showdown (at best), but “Godzilla: King of the Monsters” has the WORST story throughout the ENTIRE FRANCHISE… well, except maybe that time travel shit from “Godzilla Vs King Ghidorah“… But it definitely has the WORST human characters to populate the entire franchise. People criticized the 2014 movie for its bland protagonists, but at least they weren’t annoying and had motivations which made sense… I HATED Mark Russell (Kyle Chandler), whose dialogue seems mostly comprised of BITCHING. What was his specialty supposed to be anyway? At various points in the movie he will school scientists in their own field and military experts on strategy… is comfortable with a gun and knows a lot about animal wildlife… He’s probably a Jedi too… Emma (Vera Farmiga) and Madison (Millie Bobbie Brown) are arguably worse because their motivations are more complex, but are so poorly explained that it makes them seem like idiots… and I’m not even sure what Charles Dance’s character wanted to get out of any of this… We’ve seen this family drama done too many times before for it to really resonate here, not helped by the actors rushing through their lines detailing their tragic past, as if even they’re uninterested and want to get to the monster action. All of the dialogue sucks, by the way, especially when it’s either meant to be humorous or thought provoking. Fans might point to the Japanese movies for struggling with the same problems, but at least they had eccentric casts. Who doesn’t love the banana wielding hippie from “Godzilla Vs Gigan” or the ambiguously gay duo and their adoptive son from “Godzilla Vs Megalon“? Or my personal favorite — who couldn’t appreciate the serial killer origins story from “Godzilla’s Revenge“? Seriously… watch “Godzilla’s Revenge” again and TELL ME THAT’S NOT WHAT WAS HAPPENING! He f@cking knocks that innocent man off the f@cking ladder! IT’S ONLY A MATTER OF TIME BEFORE ICHIRO’S REIGN OF TERROR ESCALATES.

I suspect that some important scenes were cut out because there are times when characters will abruptly change locations and I just couldn’t keep up with where they were or what they were doing. At one point, we see half of the cast is in a submarine that has just crashed, but… was that off-screen? Or did I just miss it? I wouldn’t be surprised to learn that the narrative was savaged pretty brutally in the editing room. Perhaps that’s where the remains of the character development and story rest… Finally, I can’t be the only one who thinks it’s disrespectful to Godzilla’s origins to have a nuclear bomb save the day… right? You might say “No one cares about story in Godzilla” and… sure… I did enjoy myself in spite of all of these flaws, because this movie is for me. “Godzilla: King of the Monsters” is not as poetic, majestic or as elegant as the trailers made it out to be, so don’t let the marketing campaign fool you. It’s messy, dumb and cheesy, but I still spent most of my viewing experience with a messy, dumb, cheesy grin on my face. If you love this franchise, you’ll get some serious entertainment value out of this one. Say what you will about “Godzilla: King of the Monsters”, but it’s jam packed with so many cool moments that often served as a distraction to the flaws (for me).  If your only positive experience with the King of the Monsters is the 2014 film, then I don’t think you’ll like it very much. I cannot emphasize this enough, but it is important so I shall end this review with one last “this is ONLY FOR FANBOYS! IT’S EASTER EGG PORN! IF SOMEONE SPRAYS YOU WITH STICKY WHITE LIQUID IN THE THEATER, IT HOPEFULLY IS JUST MOTHRA’S WEBBING, but it… probably isn’t… I apologize to people sitting in front of me...“.

WHY MUST WE REVERE FECAL MATTER AS HOLY WHEN EXPRESSING OUR SHOCK! THEY REFER TO GHIDORAH AS MONSTER ZERO! I GET IT! I GET IT! I AM… NOW… NUCLEAR BURNING MARTIALHORRRRRRRRORRRRRRRR — okay, that’s enough of that. Thanks for your patience.