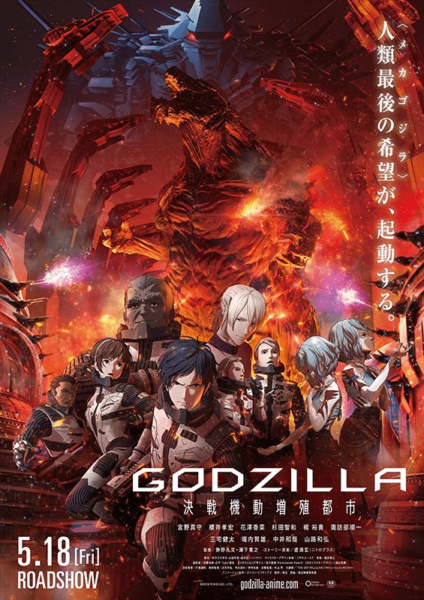 Plot: After the ‘Universal Alliance’ suffered a crushing defeat at the hands of Godzilla during the finale of “Godzilla: Planet of the Monsters“, the survivors discover that there is other sentient life on Earth…

I didn’t really like “Godzilla: Planet of the Monsters“, but I couldn’t bring myself to completely dismiss it because even if it’s not very good, it’s still unique. Beyond the novelty of seeing the King of the Monsters in an anime format, the concept was unusual and there were so many intriguing- albeit underdeveloped- ideas crammed within the narrative that it became difficult to predict what would happen next. I ultimately decided that the worth of “Planet of the Monsters” would depend on the sequels, as much of its story was dedicated to setting up the subject of today, “Godzilla: City on the Edge of Battle“. The reviews have not been very kind though, even from those who were much more generous to its predecessor than I was. I really do feel like the filmmakers were attempting to correct a lot of the flaws they struggled with before, but accidentally created their own monster in the form of agonizingly slow pacing. Godzilla fans are not strangers to the movies taking their time to set up Godzilla’s rampage, but “City on the Edge of Battle” is easily…without a doubt…the slowest moving Godzilla movie of all time…I can say this with conviction because as far as I can think of, it’s the first Godzilla flick where you don’t get any Godzilla until the 3rd act, whereas most of them usually give the audience a taste of destruction relatively early on…I also thought that the filmmakers struggled with the action scenes this time around, as Godzilla’s size means very little can be done with him, but there aren’t enough disposable characters to allow our beloved monster to really let loose like he did in the climax of “Planet of the Monsters“. The art style is the same and the quality of the animation neither seemed to improve or regress, so whether or not this is a good thing depends on your reaction to it. I’m not a fan of the art style myself, but I do appreciate the attempts to bring in new environments. I always admire world building and “City on the Edge of Battle” expands on both Earth and the mindsets of some of these alien races.

“City on the Edge of Battle” is trying to be a lot more character driven than “Planet of the Monsters” was, which explains the decrease in action, but it’s just too little and too late. To truly be invested, you have to had cared about the characters going into this…or at least been able to memorize their names…or tell the majority of them apart…and “Planet of the Monsters” gave us little reason to bother. To the credit of the writer, he does flesh out the cast enough to where they became… generic anime characters…which is depressingly, a major step up from the first one…Haruo doesn’t just spend the entire movie bellowing about slaying Godzilla, but spends most of the running-time questioning his actions and fighting off depression. Yuko gets to display some emotion, in contrast to her first appearance where her personality could be summed up as “she’s a woman“. I do have to remind you though that these compliments are backhanded, as they’re still thinly written characters with basic personalities, which is simply an improvement over the exposition props with humanoid faces that were called characters in the first film. The finale was surprisingly good though, even if the action itself was underwhelming. Haruo is forced to make some very difficult decisions that will have serious consequences, regardless of what he decides to do. The drama! The emotion! The moral ambiguity! I sincerely believe that the finale for “City on the Edge of Battle” is the best thing this anime reboot has produced, coming close to redeeming the sluggish first half. I even had an emotional reaction to the conclusion! So there is some good stuff to be found here. The story is less cluttered than the first anime, but this also contributes to the pacing issues, as there will be large chunks of screen-time where very little seems to happen. If you’re a fan of Mechagodzilla, prepare to be disappointed because he never makes a real appearance. Instead, his remains somehow evolve into a city, which the heroes use as a refuge to- WHAT THE FLYING F@CK DID I JUST TYPE!? Mechagodzilla’s corpse evolves into a city?! That makes absolutely no f@cking sense, but…it’s…very imaginative?. They use its parts to build weapons and mechs, but they’re pretty standard anime stuff, so I wish Mechagodzilla City was either more memorable or we got to see Godzilla’s robotic clone take shape once more. “City on the Edge of Battle” is also promoting the third and final entry of the trilogy by referencing other monsters, whom I won’t spoil. I have to admit that this tactic worked, as I am now looking really forward to “Godzilla 3: Planet Eater“.

So is “City on the Edge of Battle” better or worse than “Planet of the Monsters?” I guess I would say it’s both, because it improves upon the storytelling and characterizations, but suffers a decline in both the pacing and action. I can see why this sequel was poorly received, as the weaknesses of “Planet of the Monsters” catch up just in time for the excitement to cool down, forcing the sequel to pay for the sins of its predecessor. But I can also see why “City on the Edge of Battle” might age more gracefully, IF- and only IF- the conclusion to this trilogy is exceptional. At least I can finally make a connection to these characters, so I’m more hopeful than I was after finishing the first movie. I think I prefer this one, but only because of the ending, which challenges the audience as much as it does its protagonist and that’s an impressive accomplishment for such a subpar product. Yet “Planet of the Monsters” was definitely the more memorably absurd of the two and it was more action packed, which is what most of us would rather have out of our Godzilla anime. You have to decide yourself whether or not the trade was worth it, but the final result for me was about the same.