(Written and Directed by Feng Huang) 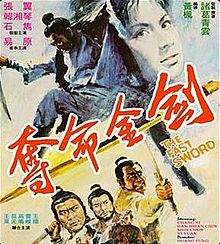 Plot: A young warrior (Chang Yi) avenges his Father and is subsequently arrested by a local magistrate (Shih Juh). But they have to team up when the dead villains minions want revenge.

“Fast Sword” might be a better movie than I’m giving it credit for, but I don’t understand how the various reviewers of the internet are treating this like it’s an overlooked kung fu classic. Yet before I explain why I feel the way I do, you should know that the DVD I got had a horrible transfer. While It was spoken in its native language (yay), the subtitles were white and plastered on the screen with the rest of the movie. They don’t even have any kind of black outlining! This often means that the subtitles blended in with the background, making half of the sentences unreadable. This is a bad way to start off things, as it automatically would mean I would struggle understanding what was being said. It’s not unlike “The Invincible Armour”, where the dubbing was unintelligible. Although at least this story is simplistic enough that it doesn’t take much to get the gist of it.

The fight scenes are stellar considering it’s a 1971 production. This wasn’t made during the days of Bruce Lee, Jackie Chan and Sammo Hung, all of whom revolutionized martial arts choreography as we know it. “Fast Sword” belongs in the time of Jimmy Wang Yu, Ti Lung and Cheng Pei-Pei. It was the era of actors pretending to be martial artists, not the other way around. I’ve liked many kung fu films from this time, but those tended to be the exceptions. What’s strange is that Sammo Hung actually choreographed this movie, but the movements seem sluggish compared to what he’d do later in the decade (“The Magnificent Butcher”). There’s a lot of flipping, including what I like to call the suicide dive attack. It’s when mooks dive at the hero for some moronic reason, allowing the protagonist to duck slightly and have easy access to the villains stomach. The fighters constantly drop their hands during their attacks and there’s a lot of slapping going on. They use plenty of gimmicks, such as Hon Seung Kam’s character wielding a whip and being about to throw full grown men with it (pretty cool). My favorite fights belonged to the blind mother, who has the ability to impale a minion and make their body mysteriously vanish during the rest of the scene. I wouldn’t call the fights awful. They were fine for the time, but choreography has advanced quite a bit since then. I will say this, the battles are plentiful. “Fast Sword” is not a slow paced featurett. 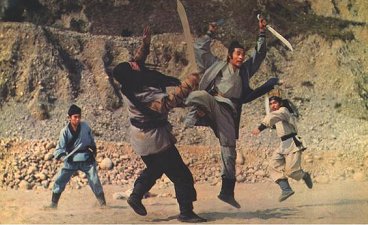 There isn’t anything new about the story, although I kept wondering if the films logic was intentionally hypocritical. The main guy (the subs were so mucked up, I never did get his name) avenges his Father and we’re supposed to be happy for him. Yet when the villains show up wanting their own vengeance, they are evil and go ‘gurrr’, so we must hate them. Granted, I suppose the primary antagonist doesn’t help his case much when he spends the bulk of the movie throwing his head back and delivering that eeeeevil laugh. He also wears an eeeeevil cape. “Fast Sword” could’ve been about the cycle of revenge as believe it or not, the late 60’s produced some thought provoking kung fu films. But they instead chose to make a traditional tale of good vs evil vs bad editing.

What makes “Fast Sword” stand out a little bit is the obvious western influences. They apparently shot the movie in Taiwan and made proper use of its unique and appealing locations. The director loves his wide shots and I love him because he loves his wide shots. The score is pretty memorable too. Whenever it would play, I suddenly had the urge to jump up on my imaginary horse and ride into combat. The movie offers adequate fights and nice visuals, but I thought it was pretty forgettable. Then again, the bad transfer might’ve sunk the movie for me too, so who knows.

Overall: “Fast Sword” is sort of worth watching if you like kung fu films from the early 70’s, but it’s not one of the better examples of its kind.