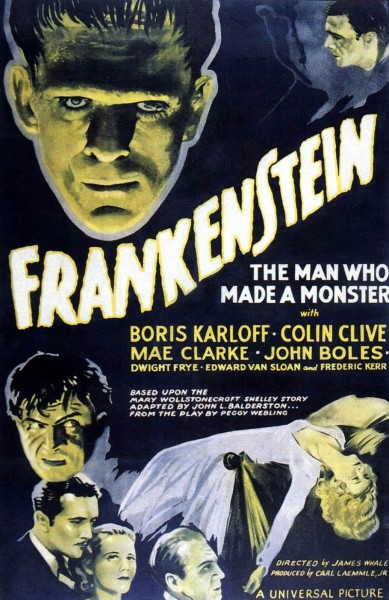 Plot: Dr. Frankenstein (Colin Clive) becomes increasingly unhinged as he seeks to create a living being using the assembled body parts of exhumed corpses. Unfortunately, his madness leads to the creation of a monster (Boris Karloff), who cannot be contained…

When I first reviewed “Frankenstein” back…er, when I was a shittier writer, I wasn’t entirely sure what to make out of it because I was somewhat inexperienced with ancient cinema. But since then, I have acquired a vast knowledge of critical analysis and combining my newfound expertise with thousands of hours of research, I have come to a single and definitive conclusion…”Frankenstein” is…old…Yes, I know that this truth might be too much for your puny little brains to comprehend, but “Frankenstein” is in fact…old…In the context of 1931, “Frankenstein” terrified audiences and broke new ground for not only the horror genre, but for cinema in general. In the context of 2015, “Frankenstein” is unintentionally comical and its status as a timeless classic is likely out of respect for its historical and cultural importance. So what would cause such a deterioration of quality? What changed? Well, besides the updates in equipment, the evolution of acting, the expansions in scripts, the longer running-times, the bigger budgets and the lengthier production schedules? But other than those, what changed?The film industry is constantly polishing its craft and making changes based on the audiences expectations. Audiences might’ve been scared of “Frankenstein” during the 1930’s, but within a few years, they had become accustomed to its scare tactics thanks to countless sequels, imitations and parodies. That is the natural progression of cinema.  ‘Obsolete’ might be a fair word to use, but it’s no more accurate than ‘Different’ in this case. “Frankenstein” is an acquired taste, because the expectations and desires of audiences back then were much different than ours. You have to expect and appreciate the different styles of acting, storytelling and presentation to make a positive connection to the film. As for me, I’ve grown rather fond of these old movies BECAUSE they utilize different methods to entertain. I see plenty of modern films on a weekly basis, so it’s nice to change things up every once in awhile and experience overly theatrical performances, old fashioned ambiance and whatever else the time period had to offer. I need to be in the right mood for this mindset to kick in, but I had an itch for it when I started watching “Frankenstein“.

One of the coolest attributes of classic horror that has been lost over time was an abundance of Gothic atmosphere, which “Frankenstein” provided with gusto. The set designs are moody and strange, drawing inspiration from German Expressionism. The ambiance is delightfully exaggerated, something else I miss. The overly dramatic thunder and lightning crashes in particular compliment the garish imagery, although the funeral procession bell early on was the most unsettling (for me). Many viewers will be turned off by the old fashioned black-and-white footage, but I think it enhances the visuals and covers up certain shortcomings in at least some of the special effects. The now iconic design of Frankenstein probably would’ve looked silly in color, at least by todays standards. While filmmaking has advanced as a craft, “Frankenstein” did boast innovative camerawork and direction that was ahead of its time. James Whale had an eye for framing, especially when it comes to contrasting the foreground with the background. One haunting moment has a Father carrying the corpse of his young daughter, while a festival is going on all around him. Your eyes never leave the grieving man, but you also pick up the crowds reactions as well and it never becomes disorienting. “Frankenstein” also is surprisingly fast paced for an old movie, never lingering on the boring romance for very long, which unites with a short runningtime to ensure that it’s an easy watch. Now yes, movie making was still in its infant stages so while “Frankenstein” boasted a higher level of sophistication during its time, it still looks somewhat crude by todays standards. It’s part of the territory, so try to ignore the obvious dummy that was used in the climax. Back then, there was no way such an effect would look realistic. 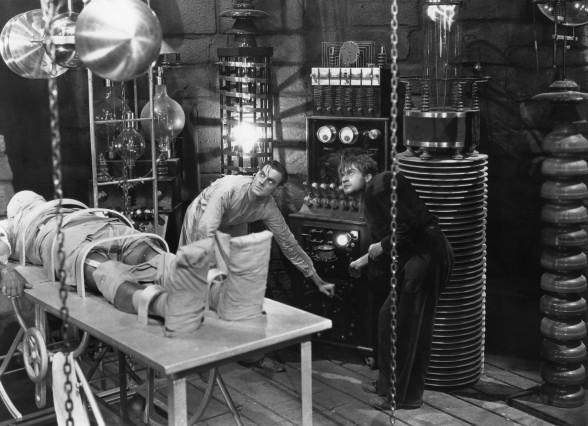 Judging the acting from the 1930’s is also entering into murky water, as our generation is accustomed to more realistic and subtle performances. A few generations ago, the actors were working with equipment that wouldn’t accurately pick up their voices or facial expressions, forcing them to have to speak and emote in a hammier way. Furthermore, most of the actors were veterans of the stage, where being broad was the only way to express themselves to audiences. While the cast for “Frankenstein” reflects this on various levels, Colin Clive (Frankenstein) embodies this style of acting…and in my eyes, is awesome for it. His over-the-top portrayal madness is thoroughly entertaining. Sometimes I felt wary of him, afraid of what he is capable of. Other times I just felt bad for him, as a screw is obviously loose. I liked how he interacted with others, sometimes exuding warmth and other times hostility. When he successfully creates his Monster, he’s suitably smug, but not to the point where I wanted to see him get punched in the dingus. He has enough layers to where he’s interesting and a more subtle performance would’ve likely diminished the power of the character. His delivery of “It’s Alive!” only works because of his crazy mannerisms and intense line delivery. But as great as he is, almost everyone agrees that the real star of the show was the Monster, portrayed by the iconic Boris Karloff. It’s stunning witnessing how much an actor can do without any dialogue. Using just his size, facial expressions, disturbing groans and body language, the monster alternates between imposing and pitiful. He is very much a victim of circumstance, but he’s also an incredibly dangerous victim of circumstance. Karloff is so perfect in the role that he makes every other version of the character look bad, with the possible exception of Christopher Lee’s interpretation from “The Curse of Frankenstein“.

Unfortunately, it is very easy to laugh at “Frankenstein” these days. The cliches are glaring, even though they probably weren’t considered as such back in the 1930’s. Elizabeth (Mae Clarke) might’ve been considered progressive for her day, as she is a little more pro-active than your usual love interest. But she’s mostly just there to look pretty, scream, faint and be a reward for the goodness of the doctor- which he arguably doesn’t even deserve. While I thought Clive and Clarke gave good performances, I didn’t buy into their chemistry and did not understand why they would want to be together. Some of the writing is outright awful, like when Frankenstein locks her in a room FROM THE OUTSIDE in response to the monster being loose. This is only done so that she cannot escape when he sneaks in through her window. While Frankenstein advancing alone to hunt his monster might’ve provided more drama, it also doesn’t make a lot of sense, unless this is a subtle way of implying that the doctor wanted to commit suicide. I roll my eyes whenever Fritz (Dwight Frye) abuses the monster (does he not see where this can go wrong?) or another doctor attempt to vivisect the monster without taking precautions. Bad writing is continuously used to advance the plot and there are some plot holes as well. But “Frankenstein” would arguably be ruined not from its own content, but from the content of another movie… 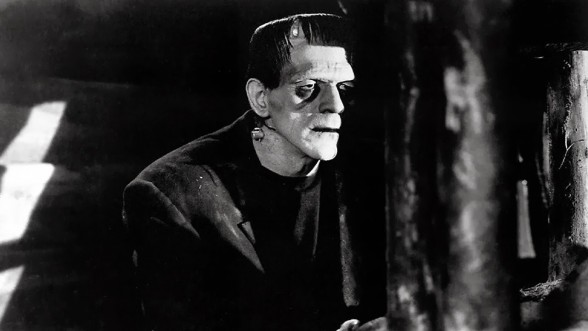 “Young Frankenstein” has always been my favorite parody. Not only does it provide plenty of memorable lines, reactions and situations, Mel Brooks perfectly recreate the aesthetics and atmosphere of “Frankenstein” (and the following 2 sequels). I have to admit that I watched it even before I saw the films it was spoofing. It does such a good job at making fun of “Frankenstein” and it’s immediate sequels that it becomes difficult to take them seriously. The “Abnormal Brain” gag in “Young Frankenstein” was hilarious, but I didn’t realize how close it had emulated the original, using only minor tweaks to make it comical. I  practically pissed myself with laughter when the Abnormal Brain scene occurred in “Frankenstein“, even though it’s supposed to be very dramatic. “Young Frankenstein” is one of two films that I’ve seen where the parody had a negative impact on what is being parodied. The other example is “Airplane!“, which damaged “Airport” so severely that it eventually lost its classic status and is now considered ‘so bad, it’s good’. The most infamous scene of “Frankenstein” is when the monster kills the girl, but while I snickered, it had more to do with the girl not freaking out at the sight of a living corpse shambling towards her than it did with the equivalent scene from “Young Frankenstein“. Oddly, I was more disturbed when Frankenstein strangles his second victim because of how silent it is. “Frankenstein” seems to lack a score, which I initially did not notice, but probably added to its atmosphere. Once again, I do want to stress that I enjoy the movie and not just in an ironic way. But I get confused when people continue to call it a masterpiece in 2015.  It’s arguably the most important horror flick of all time though and its legacy continues to spread throughout the genre. But if you choose to view “Frankenstein“, accept that it is old and older movies were designed for a very different audience. This review is merely from my perspective and your own might be wildly different.

Overall: “Frankenstein (1931)” is no longer regarded as ‘scary’, but it’s still a good movie, even if I personally don’t think it’s a great one.

-Note from Author: The following is just from my old, crappy review. It was obviously one of my earlier ones. *sigh*.

“Frankenstein(1931)” hasn’t aged very gracefully in certain areas. The special effects have become cheesy (the dummy being thrown from the window mill), there are constant continuity errors and mistakes, and the dialogue is pretty cheesy. The “normal” and “abnormal” brain bit cracked me up so much I began to wonder if this was supposed to be a horror/comedy. The ending was sort of dorky as well. On the other hand, the movie does present some horrific images. Whale definitely knows how to evoke the right emotions. He handled the drama, action, horror, and even comedy fairly well. The pacing was tight and there were a few surprises.

Colin Clive (Dr. Frankenstein) overacts, and it works. He’s intense, sympathetic, and came across as mad. He has become just as much of an icon as the monster. Boris Karloff (Monster) is very frightening (they toned this down in the sequel), but you can’t help feel bad for him. Mae Clark (Elizabeth) is solid as the fiancé. John Boles(Victor) does fine, but he’s sort of forgettable compared to the rest. I don’t think “Frankenstein” is a masterpiece, but I enjoyed watching it.

Overall: “Frankenstein(1931)” was probably terrifying in it’s day, but age has somewhat dulled it. However, it is still a good film and worth watching if you get the chance.