Plot: John ‘Falcon’ Chapman (Michael Jai White) is a troubled ex-marine who must travel to Brazil in order to investigate the assault on his sister- who has been left in a comatose state. Was it a simple mugging? Or is there a conspiracy to unravel?

“Falcon Rising” is apparently the first entry in what appears to be a trilogy, perhaps even a franchise, although I’m not entirely sure why. I haven’t heard of any source material that would draw in fans and direct-to-DVD movies usually aren’t the biggest moneymakers. I wouldn’t usually think so much about it, except “Falcon Rising” seems more interested in setting up a sequel than it is in being its own movie. This seems like a very odd and unnecessarily risky venture by the producers, but maybe there will be a pay-off. “Falcon Rising” is…acceptable. It has a strong cast, a beautiful Brazilian location, good fight scenes and even a dash of inspiration within the writing. But it also lacks focus, cramming in too many characters and ideas, while the plot appears to be building up to something amazing- only to never really get there. As a direct-to-DVD movie, I was impressed. On its own…well, I wasn’t annoyed.

At the absolute least, Ernie Barbarash (“Six Bullets“) delivers a nice looking film. The Brazilian scenery provides much needed flavor and arguably stood out more than anything else. I’m not sure what the budget was, but the production values seemed bigger than what you would expect out of a direct-to-DVD movie. The fight scenes are…good. There are a handful of really cool looking techniques, but I couldn’t help but feel that they could’ve been better. I think a lot of the problem is that they really wanted Michael Jai White’s character to look really strong, so the majority of his opponents don’t last very long. Despite there being a decent amount of time setting up certain villains, it seemed like he was conquering his opponents a little too swiftly. It’s hard to make that emotional connection to the battles when they’re so one-sided. Nevertheless, the choreography is still above average and Barbarash doesn’t screw it up with shaky camerawork or overly tightened editing. I wouldn’t call “Falcon Rising” an action packed movie, but the action was good- if unexceptional. 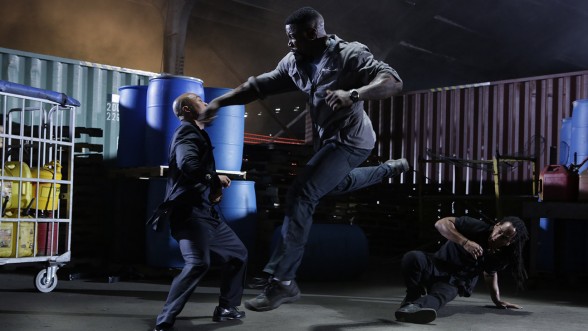 The plot is a bit of a mess. There are too many characters who could’ve easily been omitted, although they might become more important in the sequels. Neal McDonough plays Falcon’s old war buddy and because it’s Neal McDonough, you’re immediately suspicious of the character. But at no point does he ever feel integral to the storyline, only existing for the sequel hook, despite taking up quite a bit of screen-time. I don’t even feel bad for spoiling that, as the movie never even tries using him as a red herring. He doesn’t participate in any of the action sequences either, so don’t expect any awesome moments where he and Jai team up to kick some ass. McDonough might not be an A-lister, but I have to imagine he’s not cheap, so his presence is sort of a waste of money. Then we have Da’ Silva (Millie Ruperto), whom I was expecting to either be Falcon’s partner or love interest, but she also doesn’t really contribute much. Falcon also has to contend with potentially corrupt cops, assorted Yakuza assassins and a slew of other characters whose introductions devour lots of screen-time- but whom ultimately amount to little. Buried beneath this convolution lies a very bland conspiracy story and the reason ‘why’ everything went down left me feeling unsatisfied. Once again, I feel like “Falcon Rising” was more interested in setting up a sequel.

On the other hand, even if the majority of these characters could’ve easily been removed, the actors playing them all do a good job. Ruperto is believable as a tough chick, McDonough always delivers stellar performances and I absolutely loved Jimmy Navarro as the ‘is he good or bad?’ cop. That man is a good actor and has quite a bit of charisma. Of course the selling point is Michael Jai White, whose line delivery wasn’t perfect, but his presence is powerful. I never became bored primarily because White knows how to keep my attention and I’m glad he isn’t using his familiar stoic characterization. Actually, for all the crap I’ve given the storyline, I thought the character writing was pretty solid. We’ve seen the ‘troubled, suicidal hero who finds a purpose’ storyline many times before, but “Falcon Rising” takes this farther. Troubled is too tame of a word to be used when describing our protagonist. Falcon is incredibly unstable and paranoid, a constant danger to those around him. Usually these elements are watered down as the film progresses, but Falcon never stops looking under cars or having traumatized flashbacks. This provided a lot of room for White to act, which I appreciated. I also really liked Santo ( Jimmy Navarro) simply because you weren’t really sure where they were going with the character. Is he a corrupt cop with some good qualities or is he a cop-on-the-edge who uses questionable methods to get results? Eventually we do discover his true colors- for better or worse, but I liked the ambiguity. Navarro injects a shot of humanity into the characterization. There is some good dialogue as well, so the script wasn’t a total loss. Side Note: As someone with minor hearing problems, I was annoyed that the DVD didn’t have any subtitles. Sometimes those thick accents made it hard to follow what they were saying. 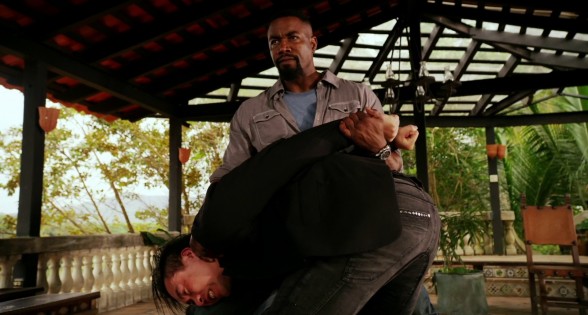 “Falcon Rising” does have a certain level of self importance that I found to be amusing, particularly with so many characters discussing how bad it is to live in this location. I kept wondering if one of the filmmakers had just watched “Elite Squad” and wanted to include that kind of social commentary in their own action movie, except they lacked the ability to incorporate it into the narrative without sounding so forced. It’s possible that they’re simply emphasizing the importance of the Brazilian slums within this franchise, but I still think that could’ve been done better…and “Falcon Rising” in general could’ve been done better. The fight scenes could’ve packed a stronger punch and the storyline could’ve been leaner…BUT I’m not saying it failed. I did feel like everyone involved tried their hardest to make a kickass movie and at times, it does kick that ass. If anything, I prefer the likes of “Falcon Rising” to “Taken 3“…and “Taken 2“- films that potentially inspired this. So I am curious to see where this franchise goes, if they choose to continue it. Maybe the filmmakers will learn from their mistakes and make a better movie. After all, I keep thinking of another Michael Jai White movie- “Undisputed 2“- which easily was superior to its predecessor.

Nudity: Prostitution is a major theme, but I don’t remember anything explicit. I could be wrong though.

Overall: “Falcon Rising” is the kind of movie that’s worth adding to your netflix queue- if you are part of the target audience- but I wouldn’t bump it up to the top.