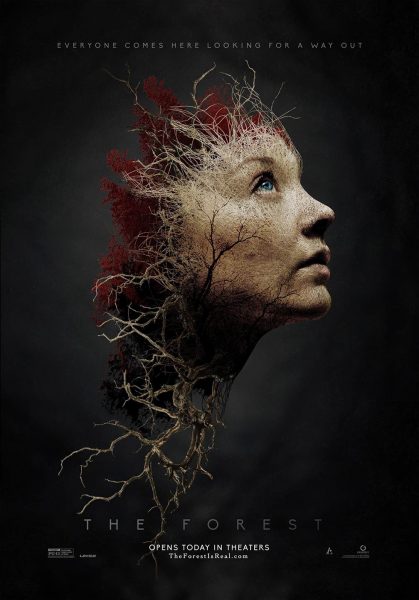 Plot: Sara (Natalie Dormer) travels to Japan to investigate the disappearance of her twin sister (Dormer again), who was last seen entering the Aokigahara Forest, infamous for being a suicide spot. She quickly gets lost though and begins to see ghastly terrors in the woods, but is the forest haunted? Or is she just going insane?

“The Forest” is unusual because unlike its underachieving brethren of haunting flicks, this was an ambitious project, providing a fresh setting, acquiring the talents of Natalie Dorner and crafting a story that can be interpreted multiple ways (ghosts or madness?). Of course, it still sucks…and that might be part of why I found “The Forest” to be strangely fascinating. I’ve become somewhat estranged from the horror genre, as I believe its current trend has a very processed approach to filmmaking. They all seemingly recycle the same scripts, have interchangeable visual styles, lazy scare tactics and cost very little to make. Most of these movies were likely pitched as ‘low budgeted ghost film’, with the story only being conceived afterwards. But with “The Forest“, you can tell that the writers are TRYING to tell a strong story, using characters with back-stories and motivations that are kind of unique. You can tell that the director is TRYING to generate suspense and terror. You can tell that the actors are TRYING to make their characters nuanced, while connecting to the audience on an emotional level. You can see the effort in every f@ck-up that ruins “The Forest“, but what went wrong? Were the filmmakers just incompetent? The writers and director don’t have many credits to their names, with the bulk of their previous works being for television and shorts, so perhaps they were merely inexperienced? Maybe they had conflicting visions? Perhaps the studio hijacked the production after realizing that this was actually going to require a real budget? I’m not sure when this project stumbled, but “The Forest” fell hard on its face from five stories high, making its squandered potential that much more tragic.

My favorite kinds of ghost stories are the ones where the entities are manifestations of an unstable mind, whether they’re intended to be metaphorical or literal. This scare tactic should mate passionately with this story, as our heroine is clearly battling her own personal demons and the writing draws attention to this conflict. She’s repressing a traumatic event from her past, is clearly dealing with issues of guilt that drives her motivation and multiple characters comment on her apparent depression. But for this to work, every paranormal encounter must tie into her trauma, yet most of these scares have absolutely no structure. She’s constantly being harassed by elderly Japanese spectres and schoolgirls, but why? What do they have to do with her parents deaths? What do they have to do with her sister vanishing? You can argue that this has less to do with her and more to do with the forest itself, which undermines the ambiguity of the situation, but she’s seeing these ghosts BEFORE SHE ENTERS THE FOREST. In fact, it takes around 40 minutes for Sara (Natalie Dormer) to finally get in there, which I thought was way too long for such a short movie. This could’ve still worked if the narrative wanted to build up this location even before we become intimate with its lurking terrors, but because they’re prematurely bombarding us with jump scares and ghastly images that don’t even tie into the characters’ psyche, the location is stripped of its power. The filmmakers- or perhaps the studio- simply got impatient, sacrificing mood and proper storytelling for cheap jumps. Amusingly, the few times the entities do tie into Sara’s backstory, I laughed out loud at how unintentionally hilarious they were. The ‘scary face’ that kid makes in the tent was lame, but not quite as bad as ‘zombie Dad’. The problem with an overuse of jump scares is that even though they might get you at first, your mind will instinctively adapt to them, so they lose their impact after the first few. But in the case of “The Forest“, I found myself giggling at them from the beginning. Every once in awhile, the director would deliver a really good, ominous, creepy shot, only for a sudden jump scare to ruin the mood. At times, I swear some of them were added in post-production, as they don’t really fit the visual. Every time the script isn’t sure where to go next, it overcomes this creative stumbling block by forcing in a random jump scare…even though the characters are not in the forest…and “The Forest” had THREE WRITERS who couldn’t think of a better way to move forward! The finale sucked because of incomprehensible editing, although to be fair, I think we were supposed to be disoriented so that we would be surprised by a revelation. I guess it worked because I was caught off guard by the surprise twist, but I still thought the amateurish direction drained it of all suspense or excitement. 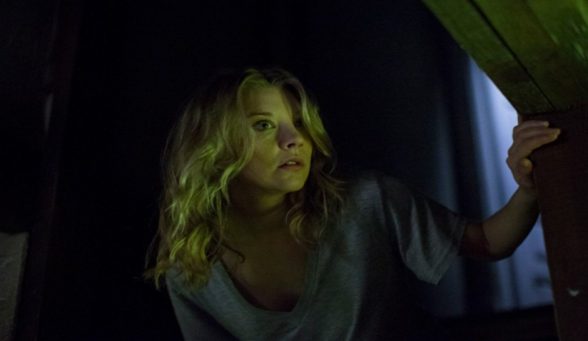 But this sounds like laziness, right? Doesn’t this contradict my earlier claims of ‘effort’? “The Forest” had some interesting ideas, even if they did not translate into interesting storythreads. Sara is searching through the forest with Aiden (Taylor Kinney), a journalist who is harboring his own secrets, which might be of sinister intent. Sara begins to suspect that he might’ve had something to do with her sisters’ disappearance and his personality gradually grows increasingly more suspicious. Perhaps this isn’t about ghosts or psychosis, but about a serial killer who’s playing with his next victim? The problem with this is that the writers are constantly having their characters do stupid-ass shit, because the plot demands it. I was constantly mentally screaming at Sara for her bad decisions, although I was certainly directing quite a few insults towards Aiden’s intelligence too. Yeah, let’s spend the night in a creepy forest with a seedy guy whom you have just met. Yeah, let’s give a knife to the chick who has just confessed to seeing things. Yeah, let’s ignore the f@cking expert and spend the night in a forest full of death traps and then wander away from camp AFTER BEING TOLD TO STAY PUT. Yeah, let’s run around in the dark, even though you’ve injured yourself doing this before. But if they acted like marginally intelligent human beings, the story would end much more quickly because the writers could not conceive anything more believable. Even though the film is constantly trying to misdirect us, the red herrings are too transparent. The final revelation surprised me, but I quickly figured out whether Aiden was evil or whether the forest was actually haunted. The script plays its hands too early, so it becomes frustrating watching the characters make the SAME F@CKING MISTAKES OVER AND OVER AGAIN, because you already know where it’s going. This ultimately turned Sara into a very obnoxious heroine, as she just seems so dumb, which doesn’t mix well with her paranoid, hostile and aggressive attitude. For some bizarre reason, the writers gave her a husband/boyfriend, even though he really wasn’t necessary to the story. I kept trying to figure out if her interactions with Aiden were appropriate or not, as at times it seemed like she was leading him on, even though this leads nowhere. She never does anything with him, so I can’t say she was cheating, but it was…just…odd..It made me question the characters’ integrity for absolutely no reason.

Not everything about “The Forest” is terrible. Even though they didn’t film at the actual Aokigahara Forest, it’s…body double (?) is a very spooky location. The overhead shots of the dense trees were really cool and the cinematography was usually moody- deserving of a better film. The acting is is solid, although Taylor Kinney overdoes his more “suspicious” persona. Natalie Dorner is a really good actress and there are times when “The Forest” really showcases her talents. I felt like she was taking the movie too seriously though, drawing more attention to the suckitude. The supporting cast mostly does fine, but they occasionally give into theatrics that are difficult to take seriously. For some weird reason, “The Forest” never bored me. It takes too long to enter the forest and once it’s there, it has no idea what to do next, but I never grew impatient or exhausted. I wasn’t really enjoying the content, but I think I was enjoying critiquing it. Usually, bad movies are rotten at their core, with even interesting concepts having no desire to rise above mediocrity. “The Forest” wants to be something more than that, so as it was failing at accomplishing its goals, my mind was always working- figuring out ‘why’ it sucked. I found the reasons to be interesting, so in a way, “The Forest” was interesting. A bad kind of interesting.

Overall: “The Forest” sucked, but at least it tried.