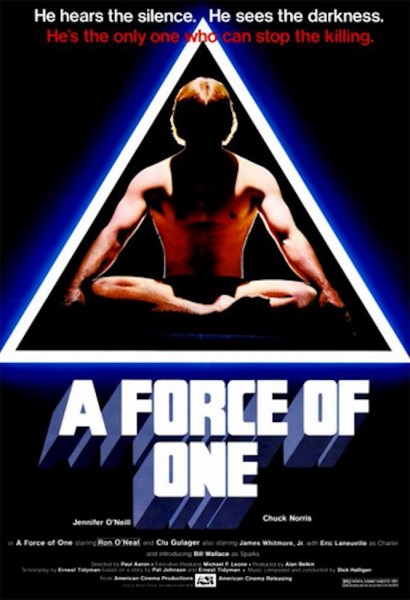 Plot: A Martial Artist is murdering detectives who come close to uncovering a drug ring, so the Police Force decides to enlist karate champion Matt Logan (Chuck Norris), who is preparing for his right with a rival (Bill ‘Superfoot’ Wallace). He reluctantly agrees, but becomes more emotionally involved and starts hunting for the killer himself. Also known as “A Farce of One” by the critics.

Am I the only one who thinks that the title of “A Force of One” is incredibly misleading? I know that Chuck Norris is the quintessential ‘force of one’, a man so bad-ass that even if his enemy cloned Chuck Norris a million times, it would still not be enough to overcome his bad-assery…But in this film, Chuck is part of a team and his allies are actually very important to his success. If anything, “A Force of One” is probably the ONE CHUCK NORRIS MOVIE that should not be calling itself “A Force of One“. I have a little bit of back-story with this flick, as it was actually the subject of one of my earliest reviews, but I forgot to post it because I used to put many reviews up on a daily basis. By the time I realized my oversight, I had thrown away my old computer which contained the critique. Therefore, I refer to “A Force of One” as my lost review, along with “Ghidorah, King of the Monsters“- which I have since found, but don’t want to release because it sucks. You should be afraid when I start talking about unnecessary nonsense like this, by the way, because it means the subject in question did not provide me with much to say. “A Force of One” has a pretty cool, if a bit absurd, concept going for it. Who doesn’t like the idea of Chuck Norris training police officers to fend off a cop killing serial killer, while he prepares for a climactic fight with Bill ‘Superfoot’ Wallace? But the film itself is…adequate. It could’ve been better. It could’ve been worse. For what it is worth, “A Force of One” is probably my favorite of Chuck’s earlier vehicles.

Throughout my viewing experience, my eye brow kept raising whenever the Police would do something so amazingly…wrong…I cannot think of another word to use outside of incompetent, except the film never seems to realize this. We’re supposed to accept them as credible, albeit understaffed. You expect shit like the cops investigating on their own without telling anyone, so they can die like proper plot sacrifices. But I loved how tough chick cop Mandy Rust (Jennifer O’Neill)- who got the more badass name than Chuck’s Matt Logan- just leaves a thug in handcuffs, next to a naked drug addict whom said thug has been exploiting, with a vague mention of her calling ‘it in’. Or what about the villains murdering someone and setting it up to look like the victim was a junkie who died of an overdose? Apparently the autopsy forgot to be a f@cking autopsy. I’m also a big fan of that cliche where a character says “I’ve found something, but I’ll talk to you later“. I keep expecting them to add “because there is a a guy in a black mask waving a gun at me. I think he wants something” before hanging up the phone, because they’ve already doomed themselves with that line. Chuck’s previous film, “Good Guys Wear Black” also tended to use this plot device…a lot. While these are definitely bad B-movie moments, I have to confess that none of them got on my nerves. I just watched and was amused by this silliness. I wasn’t especially thrilled knowing that I could guess each plot twist within the first 15 minutes, so you should have no difficulty figuring out who will turn out to be evil and who will die. I struggled buying the majority of attempts at dramatic tension. Matt Logan (Chuck Norris) doesn’t really want to help, which sets up a character arc as he becomes more involved, but it seemed to me like he just wanted to get laid and that was the only reason he agreed. I doubt that was the intention, but his initial resistance and eventual benevolence weren’t very convincing. Also, him saying he doesn’t have time at first makes me ask the question of why the cops are pushing so hard to acquire his services. Are there no other karate masters in the area? Because throughout the movie, we see a bunch of them. I also thought the Chief (Clu Gulager) becoming somewhat obstructive was unnecessary, although I guess they had to use Clu Gulager somehow. So I can’t praise the writing, but there isn’t any fire beneath these criticisms. I’m observing, not complaining.

The dialogue is pretty silly and the acting is…okay. Ron O’Neal (Rollins) probably did the best job (that hair though…) and Clu Gulager (Dunne) works even though he looks like he doesn’t really want to be there. Jennifer O’Neill (Mandy) has moments where she’s allowed to shine and is fairly convincing as the tough chick until she lets her emotions dominate the finale…because she’s a woman and crying is what women do in these movies! As for Chuck Norris (Matt Logan), his line delivery is…okay, I guess. I might argue that this was his best performance at the time, as he seems more natural than his work in “Breaker! Breaker!” and “Good Guys Wear Black“, but I stress the word ‘more’. Do not confuse that with ‘good’. The narrative is a little loose, so even though he is the main character. he doesn’t intersect with the plot too often. He’s mostly just training the cops, who do the investigating and even when he starts looking into the story himself, he never comes up with anything substantial. There is back-story on him being a Vietnam Veteran, but that never goes anywhere. To Chuck’s credit, Matt’s relationship with his adopted son Charlie (Eric Laneuville) actually did move me. Their emotionally driven scenes were over-the-top, but I cared. Actually, I thought Chuck had pretty good chemistry with everyone. I wish there was more banter between him and Sparks (Bill Wallace), as their interactions were a lot of fun. The direction is competent and occasionally even inspired, although this arguably backfires as he uses excessive slow motion near the end. The music was…weird, with some of the sound design reminding me of “Cannibal Holocaust” (!!!). I do think “A Force of One” needed more excitement, but I also never thought it was too slow. It was an easy, if underwhelming, experience to sit through.

As for the fights…*drum rolls*….They’re pretty good! Chuck Norris is probably the best martial artist to ever really make it big in cinema, since Bruce Lee’s skill is shrouded in myth and mystery, but it never translated very well on-screen. I also wonder if Chuck Norris ever really wanted to be a martial arts star, as most of his films are conventional actioners with guns and car chases. He’ll usually break out his hand-to-hand skills at some point, but they seemed to be there more for additional flavor, not as the meat and potatoes. “A Force of One” has a lot more karate, even if I wouldn’t call the movie action packed, but it boasts an authenticity lacking in Chuck’s other works. Here, I never felt like he was holding back his kicks or taking it easy. The choreography is sluggish compared to what the East was delivering, but I thought the techniques looked powerful and precise. The near misses in particular were intense, as it always feels like someone was one inch away from having their head kicked off. When attacks did connect, they looked brutal and I’m not sure whether to praise the actors for selling injuries so well or criticize the stunt coordinator for allowing the performers to hurt each-other. I remember hating the final battle during my first viewing, thinking it was so boring considering all the hype building up to this confrontation. The slow motion does kill a lot of the momentum, but my rage has softened substantially. It’s more of a story driven battle and at least it wasn’t one sided, in contrast to the majority of Chuck’s fights. The best parts for me were Chuck Norris’s demonstrations, which show off his speed and skill, perhaps even more accurately than what he delivered in Bruce Lee’s “Way of the Dragon“. But I do want to make it clear that nothing about this is amazing. The fight scenes are pretty good, but I was only blown away because I expect less from Norris in this department. As a whole, “A Force of One” provided me with a reasonable amount of entertainment, but it’s just another B-movie that happens to star Chuck Norris. I like it enough, but I won’t call it good.

Violence: Rated R, I guess. The fights are pretty brutal, but the kills are mostly implied.

Overall: “A Force of One” is a decent early effort from Chuck Norris. Watch it if that interests you.