(Written and Directed by Mike Haneke) 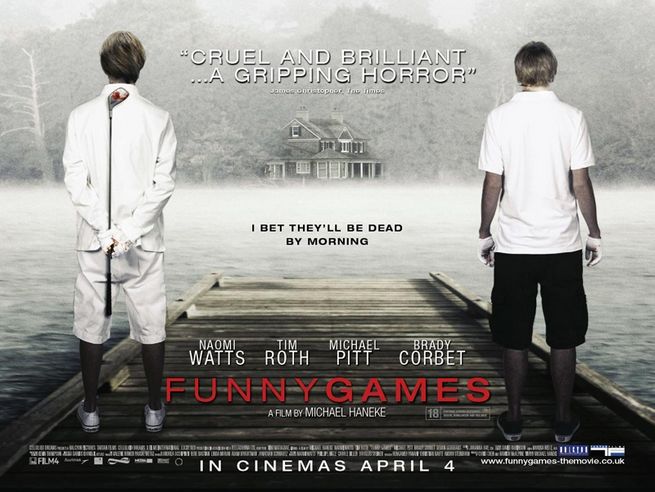 Plot: Ann (Naomi Watts) and George (Tim Roth) are a normal couple with a young son whose summer vacation is interrupted by the arrival of two psychopaths, Paul (Michael Pitt) and Peter (Brady Corbet). These two bastards terrorize the family for no real reason and they seem to know that they are in a movie. Does the family stand a chance?

If there is anything I hate more than a remake, it’s a carbon copy remake. If there is anything I hate more than a carbon copy remake, it’s a carbon copy remake of a movie that I happened to loathe. I hated “Funny Games (1997)”, believing that confused laziness with creativity. So if the 2007 remake is probably 95% identical to its predecessor, then what chance is there to like it? None. If anything, the film is even more conventional than the original because at least back in 1997, the movie would’ve been considered bold and daring. By 2007, the torture porn genre and the popularizing of downer endings has made it difficult to shock and disturb us. But since I’ve already inadvertently reviewed the 2007 movie when I reviewed its 1997 counterpart, I am going to be just as lazy as Mike Hanake and copy and paste that review, while discussing the differences at the end. The lines break off where I copied and pasted from the first review.

“Funny Games” is a subversive film that is a commentary on violence in the media as well as a critique of its audience for wanting to watch such a grisly film. It asks bold questions such as: is killing a fictional character any different than killing a real person? This is expressed by Paul, the main antagonist who seems to be aware that he’s in a movie. He consistently breaks the fourth wall, winking or smirking at the camera. He confesses that he lets certain events happen so that film conventions may occur. He even indicates that he postpones the killings of the characters so that the movie could reach the length of a full feature film. “Funny Games” plays into the expectations of its audience, while also attacking it. Enjoying this film comes down to how you respond to it. 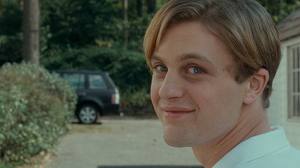 At its core, “Funny Games” is just a typical home invasion movie. Now this is a subgenre of horror and thrillers that I’ve never been fond of. To me, they are like exorcism movies in that they are all pretty much the same movie. They all share the same cliches, conventions and structures. Sure, I will like one here or there if I appreciate the execution, but generally I am not part of the target audience. My problem with “Funny Games” is that it has every cliche or convention that you would expect it to have. Is it a little more daring? Maybe. But to me, it was a bad movie that kept telling us “We know it’s bad, but we point out that it’s bad, so that makes it good”. At least “Scream” created twists and surprises out of its meta-ness. It was clever about it, even if the movie perhaps went too far with it. “Funny Games” is not. Well, let me backtrack a little. There is one (notorious) scene where being meta actually drives the plot. It also happens to be the stupidest scene in the movie but hey, I certainly didn’t see it coming.

What’s sad is that “Funny Games” is not necessarily a bad movie. The acting is very good, if not great.

And let’s continue here. If we compared the casts of the two movies, I’m a little split. Both had solid actors who did good jobs within their roles. I personally prefer Tim Roth and Naomi Watts as the parents. Both just stood out more, whereas the previous couple was (intentionally) generically normal. However, I preferred the original killers, primarily because they looked like normal, good kids and this was a nice contrast to the fact that they were sadistic killers. Here, these guys just look too much like sadistic killers trying to come across as normal, good kids. Oddly, it was something about their hair that made them seem so overtly evil, which has to be the strangest criticism I’ve ever given. I certainly wouldn’t let these guys in my house, whereas the original duo might fool me into doing so. 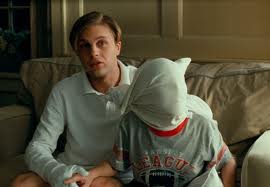 Otherwise, the movies only saving grace is that director Hanake at least knew how hot Naomi Watts is, so made sure that she spent a large chunk of the movie in her underwear. Is it a surprise that those scenes kept me interested more than the rest? There are no new scenes or any scenes that felt noticeably different. It’s the same script with a few tweaks in dialogue and the director re-uses his more inspired set-ups. Luckily, the editing was slightly better when it came to the original films most boring sequence (when the killers briefly leave). It seemed to go down quicker and I wasn’t screaming at the television. Because yes, sometimes I scream at my television. I also noticed that the dark humor was more noticeable, although this might simply be part of the translation from German to English.

“Funny Games (2007)” is technically superior to its predecessor, if only by a hair. But at least the original film WAS an original movie, even if it itself was very familiar. Had I seen it back in 1997, maybe my opinions would be different. Back then, a bleak, darkly comical satire might’ve been refreshing. But by 2007, there is nothing startling or memorable about it. This is just another remake that took little-to-no effort because the director had already made this movie 10 years ago. There reached a point where I actually started fast forwarding through it (the movie still took almost 2 hours to get through, so I probably only shaved off 3-4 minutes) because I had seen all of this before. If “Funny Games (1997)” collapsed under its own self importance, “Funny Games (2007)” is its sloppy seconds, even if the filmmakers had technically improved.

Violence: Rated R worthy, although most is still off-screen.

Nudity: None, but Naomi Watts is in her underwear for awhile.