(Written and Directed by Michael Haneke) 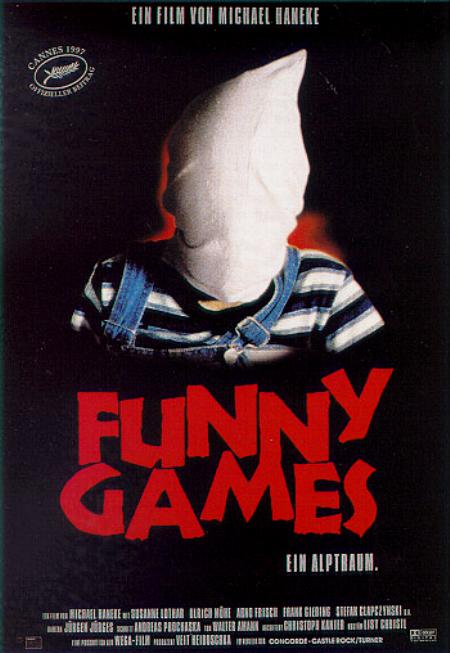 Plot: A normal, but relatively wealthy family visit their lakeside home. However, their vacation is interrupted by the arrival of two psychopaths who take them hostage. The leader, Paul (Arno Frisch) and bets their three victims that they will be dead within a day. Can their victims survive?

“Funny Games” is a subversive film that’s a commentary on violence in the media as well as a critique of its audience for wanting to watch such a grisly film. It asks bold questions such as: is killing a fictional character any different than killing a real person? This is expressed by Paul, the main antagonist who seems to be aware that he’s in a movie. He consistently breaks the fourth wall, winking or smirking at the camera. He confesses that he lets certain events happen so that film conventions may occur. He even indicates that he postpones the killings of the characters so that the movie could reach the length of a full feature film. “Funny Games” plays into the expectations of its audience, while also attacking it. Enjoying this film comes down to how you respond to it. 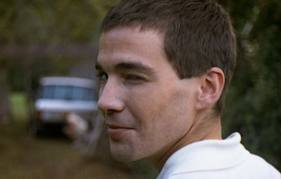 At its core, “Funny Games” is just a typical home invasion movie. Now this is a subgenre of horror and thrillers that I’ve never been fond of. To me, they are like exorcism movies in that they are all pretty much the same movie. They all share the same cliches, conventions and structure. Sure, I will like one here or there if I appreciate the execution, but generally I am not part of the target audience. My problem with “Funny Games” is that it has every cliche or convention that you would expect it to have. Is it a little more daring? Maybe. But to me, it was a bad movie that kept telling us “We know it’s bad, but we point out that it’s bad, so that makes it good”. At least “Scream” created twists and surprises out of its meta-ness. It was clever about it, even if the movie perhaps went too far with it. “Funny Games” is not. Well, let me backtrack a little. There is one (notorious) scene where being meta actually drives the plot. It also happens to be the stupidest scene in the movie but hey, I certainly didn’t see it coming. 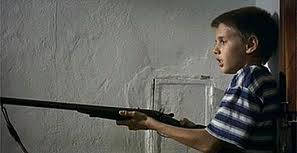 What’s sad is that “Funny Games” is not necessarily a bad movie. The acting is very good, if not great. The villains are menacing and detestable while the family do a good job at being normal and they usually react as normal people would. There are a few inspired moments with the dialogue and the direction. Yet the director does not do a good job at capturing emotions, therefore I remained emotionally detached. He uses wide shots when he should be more intimate with the camera. A devastating event happens that could’ve been very effective had the director used close-ups, so he could let the actors express their despair. BUT HE KEEPS IT AS A WIDE SHOT! The second half actually solidified this as a bad movie for me. The first half, while awkward and bland, kept my interest. I did like how the villains kept changing their stories as to why they were doing everything, proving that they had no real reason to torment these people. But once ‘the event’ happens, the movie is just one overlong scene after another. Characters will spend minutes sitting still, not speaking at alI. Or they will struggle to move because they’ve been injured and spend more minutes trying to limp away. I’m not exaggerating about the times either. One segment goes on for about 10 minutes and it’s pretty excruciating. I presume he was trying to build suspense. The problem is, you know what’s coming and you know when it will come. So I was waiting for the movie to catch up with me.

When I reviewed “Martyrs”, I argued that the emotional response to the events was more important than the films technical achievements. It was a well made movie, but if the violence turned you off, then you’ll hate it. I loved that film, but hated “Funny Games” for the same reason. It’s not the violence that bothered me, however. I hated what the movie was trying to sell. I hate movies that disrespect their own audience. Reading interviews by the writer/director only serves to fuel my hatred. The bulk of the film is too unoriginal and the original concepts (the fourth wall nudging) only serve to point out how uncreative it really is. But for the reasons I loathe it, you might appreciate it. “Funny Games” is 100%, a subjective feature that will either work on you or not. Ironically, this came out during a time when violence in film was at an all time low, making the message rather outdated. Yet the film was remade in 2007, during the height of the torture porn genre, so that actually might be more fitting. Will I like it, even if it is a shot for shot remake? Probably not, but it might be a little more relevant for its time.

Note: “Funny Games” isn’t technically a horror film, but despite what the director may say, it is a thriller. Yet it’s more psychological than visceral, focusing more on dialogue than action. I’m categorizing it as a horror film regardless of that.

Violence: Rated R worthy. It relies more on our imagination though.

Nudity: Strangely, the villains force the wife to strip, but the camera is tasteful about it. Later on, she removes her shirt and we can clearly see her breasts through her bra. Er, what was with the modesty then?

Overall: I think you can tell whether or not you will like “Funny Games” just by reading about it. If it sounds clever to you, then give it a look. If It sounds obnoxious, then avoid it like I should’ve. I hated this movie, but only because I disliked its gimmick.