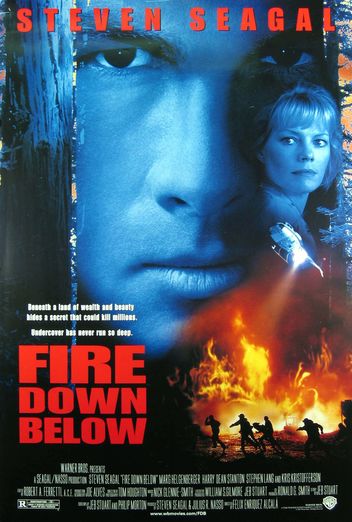 Plot: Jack Taggart (Steven Seagal) is an Environmental Protection Agent whose best friend dies under mysterious circumstances while investigating a company that’s allegedly dumping illegal toxic wastes in the hills of Kentucky. It’s lead by Orin Hanner Sr. (Kris Kristofferson), who is willing to kill for the sake of his business. But while investigating, Taggart falls in love with a troubled local named Sarah (Marg Helgenberger).

“On Deadly Ground” wasn’t just Steven Seagal’s first bomb, it was also the beginning of a string of bombs. While “Under Siege 2” managed to gross over $100,000,000, those numbers were lukewarm compared to its wildly successful predecessor. “Executive Decision” fared about the same, but Seagal only had a glorified cameo. “Glimmer Man” recouped its budget, which might as well constitute as a flop when you consider marketing costs. “Fire Down Below” was a return to epic fail for Seagal, grossing only $16,000,000 of its $60,000,000 budget. But is “Fire Down Below” a bad action film? Not at all. It’s a mediocre chick flick. Wait, WHAT?!

The biggest surprise about “Fire Down Below” is that it was scribed by Jeb Stuart, the man who brought us great actioners like “Die Hard” and “The Fugitive“. Those films provided wit, vulnerable action heroes, high octane action and were wonderfully paced. They were exciting and intense. “Fire Down Below” has…well, one pretty cool truck chase scene. Otherwise, there isn’t a whole lot of action. The dialogue is mostly bland. Steven Seagal is invincible, although this is only because his enemies are monumentally stupid. Seriously, if you have a guy surrounded with guns, don’t get so close to where he can disarm you! It shares none of the traits of the writers better movies, although I wonder if Seagal re-wrote the script to fit his image. The pacing though is one of the worst aspects of the movie.

The film has the tendency to wander around, exploring various possibilities as to what it wants to follow before finally making up its damn mind. The opening credits has Seagal’s friend perishing, but with the exception of one line, this is pretty much forgotten. That was a waste…No pun intended. Seagal spends a healthy amount of time befriending a troubled local (Harry Dean Stanton)- who provides exposition we already know about before vanishing from the majority of the feature- as well as the town reverend (Levon Helm). His death is supposed to have a major impact on Seagal but it’s almost immediately forgotten too. There’s a lot of screen-time dedicated to Seagal hanging around kids who never become relevant.  Even some of the action doesn’t always tie in with the bulk of the story, like when Seagal randomly wanders in on a drug farm. Most frighteningly, the love story between Seagal and Sarah starts to gobble up all of the screen-time and more-or-less becomes the primary focus. To be fair, this isn’t a poorly done romance. The actors have some chemistry and it’s not like they jump in bed after two seconds. But I don’t watch Seagal movies for romance. To add to the already cluttered storyline, Sarah has a dark past and a crazy brother named Earl (Stephen Lang). We wonder if Earl will be an important antagonist, but he’s removed in an unsatisfying matter. The plot is comprised of many wasted storylines, but I suspect Seagal is at fault here.

“Fire Down Below” wasn’t written as a Seagal vehicle. Before Seagal came on board, they had actually offered the role to Bruce Willis, who subsequently turned them down. My guess is Stuart’s involvement came to an end at that point and Seagal hired Philip Morton (a nobody) to do some re-writing. It seems like most of the unnecessary divergences are there to glorify Seagal. A lot of Harry Dean Stanton’s scenes could’ve been trimmed or sliced out, but the important thing is we see Seagal show off his dramatic chops against an accomplished actor. What about all of those interactions with the kids? So we can see Seagal’s tender side. The preachy nature of the feature reeks of Seagal-ing and I’ve never seen a Stuart movie where the hero was this powerful. None of the villains ever stood a chance against our hero. The film also shares the blatant stereotyping (hicks) and acceptance of inhumane treatment towards bad guys that made made “On Deadly Ground” so bizarre. Did I mention that Seagal directed that movie? As our present director only had experience doing TV stuff, I doubt he had control over his star. I could be wrong though. It’s just speculation. 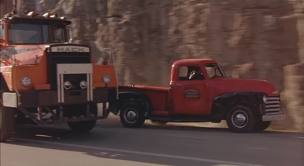 Much like Steven Seagal in his later career, the script is just way too fat. Had it removed much of the blubber, it could’ve been a lean, mean actioner. Would it have been on par with “Under Siege” or even “Out for Justice“? Probably not, but I would’ve at least acknowledged it as harmless. Anything good to say? The fights are okay (but rare and unexceptional), the truck chase was pretty spectacular and the acting is solid by the performers who mattered. I liked Kris Kristofferson, Stephen Lang and Harry Dean Stanton. Even Seagal does fine. The scenery is pretty too, but I spent the majority of the movie eying my clock impatiently. I wish I could lampoon the love story a bit more, but that angle is developed decently. It was just in the wrong kind of movie. Otherwise, “Fire Down Below” is “On Deadly Ground“, but without the ‘so bad-it’s good’ entertainment value.

Violence: Rated R worthy, but it’s not that hardcore.

Nudity: None, although there is talk of incest and molestation.

Overall: “Fire Down Below” is boring. Unless the idea of a Seagal romance sounds intriguing to you, I wouldn’t bother.