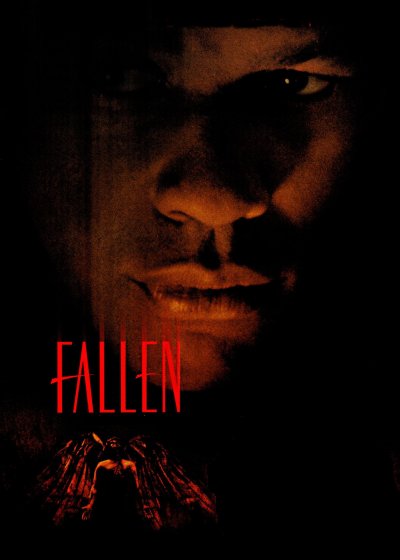 Plot: Detective John Hobbes (Denzel Washington) has made quite a career of solving the more difficult cases. His most famous catch was Edgar Reese (Elias Koteas), a brutal serial killer who is about to be executed. The execution occurs without any trouble, but it turns out that Reese wasn’t a murderer. The demon who had possessed him was the real killer and he now wants to make Hobbes’ life a living hell.

Even though I have a tendency to diss the 90’s- especially the later years- whenever I get the chance, a movie like “Fallen” always seems to come along and slap me in the face. When I rub my tender cheek, while tears fill my eyes and I ask “Why?”, the decade reminds me that I only remember the bad parts. I only remember them pussying out when it came to gore in slasher features or I’ll only recall the overdone self referential bull-shit. I’ll often overlook the grim serial killer entries that the decade gave us, such as: “Se7en”, or “Fallen”. This subgenre contained some of the harshest, bleakest thrillers out there and they weren’t even very graphic compared to what we got in the 80’s (or now). I remember seeing “Fallen” when it first was released on VHS and was thoroughly freaked out by It, but I can’t go into detail about why without spoiling it. So this is not going to be an easy review.

What surprises me the most about “Fallen” is that it’s one of the few thrillers that managed to get under my skin despite the fact that 90% of the screen-time is dedicated to Denzel trying to figure out what we already know. I actually wish that the movie didn’t reveal so much immediately. Wouldn’t it have been more effective had we spent the bulk of the movie not knowing what the hell is going on? Perhaps part of the reason this works is because the film acquired such a classy cast. No one is giving the best performance of their career, but nobody slums it ‘because the material is beneath them’ or whatever. Denzel Washington is just as charismatic as always and has a lot of conviction in the role. It also helps that Hobbes is a very likable protagonist and we can’t help but to care for his plight. John Goodman (Jonesy) is also endearing as his partner and I wish there was more of him. I liked his “why are we here?” speech because it wasn’t oversold and they stress his confusion as to why he was being asked that question in the first place. I wish Donald Sutherland’s (Stanton) character was fleshed out a bit more, because I never really understood why did some some of the things that he did. To add to the films respectability, James Gandolfini (Lou) and Elias Koteas (Reese) have small roles, with Koteas standing out as spectacular in his limited screen-time. Man, remember when horror movies could actually afford such an impressive cast? That’s one thing I have to give the 90’s, they made horror features seem appealing to the stars. 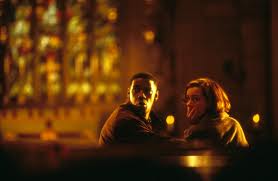 “Fallen” is creepy though for a few reasons. For one, a few scenes are classically uneasy. Whenever we find Hobbes or some other soul walking alone at night, the film suddenly becomes atmospheric, as if evil lurks around every corner (and it might!). The scenes in the abandoned cabin are very spooky and every once in awhile, an effective jump scare will find its way in the picture. But generally, it’s the ideas that get you. An entity who can enter anyone- or anything- it wants is certainly a concept ripe for horror. Whenever it shows off this power, whether it’s by harassing Hobbes or chasing down Gretta (Embeth David), the suspense is bone chilling. There’s something else that makes the film so effective as well, but here is where I have to stutter a bit. There’s a creeping dread present throughout every scene, reminding us that this movie probably won’t have a traditionally happy ending. Even if Hobbes overcomes this evil, it will cost him either his friends, his family or maybe his life. All of this combined to make a film that had me biting my nails in anticipating throughout its entire running time. Once again, this is pretty impressive considering how flimsy the narrative is.

But in the end, I suppose “Fallen” brandished a relatively common recipe for success. The film doesn’t have many horror set pieces and it’s rarely overtly scary. Beyond a handful of sequences and that demon POV, the direction is relatively minimal. It’s the actors that make this into an effectively horror-thriller. The demon- regardless of who is playing it- is so deliciously evil and unpredictable that the creature becomes quite scary. The good guys- primarily Denzel- are so genuine that when they become afraid, that fear is infectious. This is why the horror genre has become stale. The genre has forgotten that it’s the actors responses that sell the scares. For me, “Fallen” was great primarily for this reason. Other than a few missed opportunities, I had no issue with this movie and don’t even agree with many of the more common complaints. I was 100% into it. So maybe horror in the 90’s wasn’t so bad after all!

Overall: “Fallen” is certainly worth watching if you want to see a good thriller with a demonic twist.