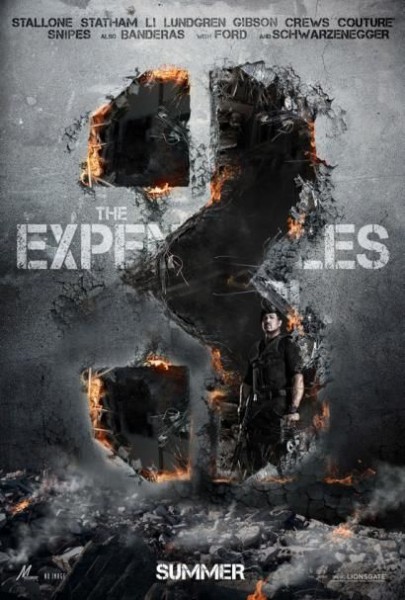 Plot: Barney Ross (Sylvester Stallone) disbands the Expendables after they learn that a former ally-turned enemy (Mel Gibson) is their new target. He recruits a group of younger mercenaries…but…but…does anyone seriously want this?

“The Expendables 3” gained notoriety when the flick leaked online about a month before its grand opening, causing a bunch of douchebags who want to bleed out the franchise by denying it ticket sales to feast their worthless eyes upon it. Even if the reception was positive, it would’ve likely ensured that this third entry would’ve flopped, so thanks for that…assholes…I despise movie piracy, especially when the movie in question is one I want to see succeed. But negative word of mouth slowly began to poison my expectations, a truly terrible accomplishment considering how much I adored its predecessors. So is “The Expendables 3” as bad as everyone says it is? Absolutely not. In fact, it’s an acceptable- even sometimes enjoyable- actionfest that unfortunately has lost focus on what made the franchise so appealing to begin with. When you break everything down, you realize that it has no real target audience. The misguided attempts to broaden its audience will only alienate established fans, while failing to bring in new ones. I’m not entirely sure what the logic is. If you didn’t see “The Expendables 2“, then it’s unlikely you’re going to watch “The Expendables 3” just because of the younger faces and reduced amount of violence. Instead, new fans should come from viewers watching the first two films on the small screen and hopefully liking them while veteran fans will be secured by expanding upon the gimmick- new established action stars joining the project,. Yet this is also one of those weird cases where the baffling marketing decisions end up effecting the script on an objective level. The screen-play is fine in segments, but as a whole, it’s sloppy and disjointed. It’s almost funny when you realize that the first 45 minutes were entirely pointless in relation to the rest of the movie, but then the following 45 minutes become pointless in relation to the finale, which is then rendered pointless because the rest of the movie was pointless. It almost seems like there was a behind-the-scenes clash, where the suits wanted to focus more on the younger crew while the real filmmakers wanted to focus more on the PEOPLE WHOM THE MOVIE IS NAMED AFTER, but no one made any concessions. In other words, they decided to keep in everyones ideas and edit nothing out. To call “The Expendables 3” bloated is an understatement, even if some of that fat is pretty tasty.

One thing that confused me was the decision to defang the franchise by rating it “PG-13”. Didn’t everyone freak out when “The Expendables 2” tried to do that? What’s the point of emphasizing characters shooting people if you can’t really show people getting shot by the characters? Once I got past that though, I honestly found the action sequences to be pretty solid. There were a lot of crazy scenarios that our heroes were finding themselves in, lots of cool stunt-work and lots of high octane sequences of mass destruction. The sound design was pretty intense too. Yeah, the editing could be pretty inconsistent and I think the film would’ve been much more comfortable with an R rating, but the spectacle on display was more impressive than the detractors made it out to be. Hell, the first act was thoroughly entertaining because the Expendables have such good chemistry together. I love watching Jason Statham and Sylvester Stallone banter, I love Terry Crews comedic’ timing and I love it when Dolph Lundgren is having fun and not being the stiff he seems to want to play in his direct-to-DVD efforts. When they meet up with Wesley Snipes, I was thrilled because he was having a blast with the role and was showing more personality than he has within the last 15 years. Everyone’s interactions are adorably colorful and should easily be able to carry the film alone…and they would’ve…except then they leave.

Yup, for a movie called “The Expendables 3“, the actual Expendables spend most of their time off-screen. Who do we get instead? Well, there is Kellan Lutz, who gave a showstopping performance in “The Legend Of Hercules” and by showstopping, I mean showstoppingly terrible…He’s the wild card of the group, but is hinted to be the next leader of the Expendables (Oh God!). Honestly, Lutz isn’t terrible. The problem is that they establish his personality and character arc almost immediately and COMPLETELY FORGET ABOUT THEM. Why spend so much time on his alleged leadership skills and problems with authority if you aren’t going to do anything with them? After his introduction, he just becomes another face in the crowd. There’s also some MMA chick named Ronda Rousey…Whom I didn’t think was as terrible as everyone says she was. But she’s not good enough to justify her presence and the character is flat. There’s also two other guys whom you won’t even remember. Apparently one is a boxer, but outside of punching the bag during his introduction, he NEVER DOES IT AGAIN! It’s not like the role required any form of acting, so this isn’t going to do a lot for his career, but why hire a boxer if you’re not going to make them box? These characters are not very interesting and the actors couldn’t make up for that. Their banter and interactions are…did they ever even banter or interact? I don’t remember! But I do remember feeling that they had too little screen-time to matter while gobbling up too much screen-time to keep the pace flowing. This is where the script problems come into play though. The entire opening act is based around Wesley Snipes’ character being rescued and joining the team, so you presume that he is going to be relevant to the story. There is even a dynamic where he is revealed to be an original Expendable, making him part of the old guard while the current crew are technically the newbs in comparison. Admittedly this doesn’t make a lot of sense as Snipes looks younger than everyone else and his action movie prime was during the 90’s (whereas Lundgren and Stallone thrived during the 80’s), so there’s no reality subtext. But fine, I can go with it. Yet after the first act, Snipes becomes another face in the crowd and he’s replaced by the even younger crew. So why spend so much time on this character and this dynamic if it’s going to become irrelevant as soon as the second act begins? They should’ve either cut out the character and just re-cast Snipes as one of the newer crew members, dedicating this freed time to something more important. Or they should’ve done a better job at tying the character into the rest of the story, keeping him present long enough to justify the first act being based entirely around him. While they’re at it, they could’ve done a better job explaining why Barney Ross chose to break up the Expendables. The only justification of it would be if their advanced age and/or out-of-date style resulted in a disastrous defeat. The injury of one of their own isn’t enough considering how that also happened in the second film…and the first film…yet apparently Barney follows the ‘three strikes’ rule.

There are two bright spots in the forms of Mel Gibson and Antonio Banderas, who both starred in the similarly disappointing “Machete Kills“. Banderas is playing a comical character and he was pretty fun. When he shows up for the first time, I was given hope that his presence could keep things interesting, but then he also vanishes until the finale. Ugh. Whereas Mel Gibson seemed to be phoning it in during “Machete Kills“, he goes all out in “The Expendables 3“. Like the movie or not, he is definitely its greatest highlight. He’s charming, but he can be so menacing that I could’ve sworn even Barney Ross was terrified of him. Their final confrontation is anti-climactic, but I don’t know how they could’ve properly done pulled such a battle off. The funny thing is that if this wasn’t “The Expendables 3“, I wouldn’t have minded the second act. The action is still fine, the production values are impressive and the veteran actors excel when given the opportunity. Harrison Ford ALMOST shows a HINT of his old personality and Kelsey Grammer had good chemistry with Sly. But these positive attributes only tease us and make the watchers angrier.

When the third act rolls around, I started to get the impression that the director realized he had screwed up. While the younger crew are still present, it seems like the people whom WE ACTUALLY WANT TO WATCH started taking back the screen-time. Kellan Lutz might’ve been played up as the ‘future’ of the Expendables, but did anyone notice what he was doing during the final battle? I remember him driving a motorcycle once. Other than the chick, who finally gets to show off her MMA skills, they’re all in the background. Instead, we get to see Statham and Snipes using their knives, Ford in a helicopter duel, Arnold gunning down mooks, Antonio being goofy (albeit deadly) and Jet Li even shows up for three seconds to fire his gun. For those who complain that Jet Li doesn’t get any fight scenes, it’s because he has a critical health issue which keeps him from physically exerting himself too much. The finale is a lot of fun, but it represents what went wrong with this project. The second act is completely pointless because despite spending so much time building up the newer crew, they barely register during the finale. It’s the older- but not quite as Wesley Snipes?- crew who does the bulk of the work. They get the only good interactions, lines and action sequences. If the plan was to ‘pass the torch’, then why aren’t the filmmakers making the younger generation look so bad? The 3rd act is always designed to be a conclusion to the 1st and 2nd acts, but if they’re both pointless, does that mean the 3rd act is pointless too? “The Expendables 3″ needed a script doctor to either edit out the unnecessary stuff, or at least transplant it better with the necessary stuff. It needed to re-evaluate its goals and consider the repercussions of forgetting what made this franchise so popular to begin with. But is it terrible? No. For all its mistakes, I did enjoy a lot that “The Expendables 3” had to offer. It was just that the flavor either sunk to the top or the bottom, while mediocrity dominated the rest.

Overall: “The Expendables 3” is watchable if you’re a fan, but it’s also a bigger disappointment if you’re a fan. I’d say it’s a 2.5/4 star movie on its own, but factoring in its failure as a sequel…