Plot: The honorable, mercenary group known as The Expendables- the members being Ross (Sylvester Stallone), Christmas (Jason Statham), Gunner (Dolph Lundgren), Caesar (Terry Crews), Yang (Jet Li), Road (Randy Couture) and the newbie, Billy the Kid (Liam Hemsworth)- are ordered by the mysterious Mr. Church (Bruce Willis) to partake in a mission that should be a walk in the park. They must escort a specially trained agent named Maggie (Nan Yu) to the sight of a crash so that she can recover a mysterious item. However, they are ambushed by another group of mercenaries headed by a man named Vilain (Jean-Claude Van Damme), who wants the item for his own, nefarious purposes.. Vilain murderers one of the members (won’t say who!), so the Expendables decide to go on a roaring rampage of revenge, but they’re going to need some help.

I loved “The Expendables“. Is it a great movie? Not really. Pretty much all of the more iconic cast members have done superior features in the past, whether it be in terms of character, story or spectacle. Yet the film worked because it was beautifully paced, continuously delivering a stream of non-stop action that favored stunts and practical effects over CGI. Yet it also knew when to slow down so we could observe these great stars playing off of each-other. While many (Jet Li fanboys) disagree with the following statement, I thought the movie balanced the screen-time of its cast pretty effectively. “The Expendables 2” offered to be even bigger, adding Chuck Norris (Booker), Jean-Claude Van Damme and perhaps the biggest action star of all to the mix: LIAM HEMSWORTH! lol, nah, that one did nothing for me. Then they expanded the roles of Trench (Arnold Schwarzenegger) and Church (Bruce Willis), which only increased my arousal- I mean, excitement. Sadly, my expectations were dimmed amidst all the controversy (people died while making this) and I don’t have the most respect for director Simon West and his writer, Richard Wenk. Both tend to do rather mediocre work (although I enjoyed “Con Air“) and all of this mess came even before they considered the PG-13 rating (thank God they changed their minds!). Yet fear not, while “The Expendables 2” had more noticeable flaws, it’s also the perfect sequel. It brought back what we loved about its predecessor, but then did its own thing.

The first thing that I noticed about “The Expendables 2“- although it’s obvious just by watching the trailers- is that it has a totally different aesthetic style and tone when compared to the previous film. In fact, if “The Expendables” was a Stallone movie at heart, then “The Expendables 2” was a Schwarzenegger production at its core (even if he’s not in the movie that much). What does this mean? Well, the usual Stallone actioner is gritty, dark, brutal and the cheesy dialogue is delivered with a straight face. Jason Statham would beat someone up and pop their basketball with a knife while saying, “Next time, I’ll deflate all your balls” in a scary voice. Sometimes, you wondered if the writer even knew how silly the dialogue was, although this created its own charm. On the other hand, a Schwarzenegger actioner is more light hearted, cartoonishly violent and there’s a lot of winking at the camera whenever a goofy line is spoken. “The Expendables 2” is much more like that. The movie knows how absurd it is and while it never descends into parody, it just wants to have fun with its concept. It has no pretensions about itself, it just wants to entertain you. Visually, the film uses a lot more wide shots and all of the action takes place in the daytime, whereas the first film took place at night and was more intimate with the camerawork. So while this isn’t a praise- or criticism- “The Expendables 2” feels more like a true action film from the 80’s and early 90’s. 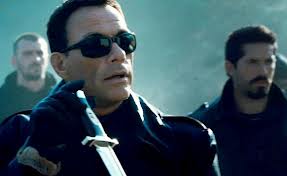 Just as “The Expendables 2” expanded its cast, it also is more ambitious when it comes to the action set pieces. There are a lot of big explosions where whole sets are clearly being detonated. As I alluded to earlier, the first film was more ‘in your face’ with the action. This sequel pulls back a bit so we can witness all of the shoot-outs, destruction and gore in all of its glory.West directs with a steadier hand than Stallone did, making sure to not go over-the-top with the editing and keeping the hand held camera under control. I thought Stallone’s direction was good- I loathe the Razzies, who just like picking on him- but West never has any weak moments. The camera is always still, in the right place and the editing only gives the action sequences the right kind of intensity. While I wish there were more fight scenes, what we got were surprisingly well executed. Jet Li’s opening battle and the ‘Jason Statham vs Scott Adkins’ fight are very cool, the latter because of how beautifully the fighting styles contrast. Statham is raw, while Adkins is flashy. The Van Damme Vs Stallone fight was a little underwhelming, but only because I expected more of a martial arts battle. I forgot that Stallone isn’t a martial artist and his fights are more akin to brawls. As such, it’s fine, but why have Van Damme if you aren’t going to have him take on a fellow martial artist? I wanted to see him fight Jet Li or even Randy Couture! That’s more of a missed opportunity though, not a real criticism. Yet West also knows that action alone isn’t going to cut it. People are more interested in watching their favorite stars interact.

Sylvester Stallone (Barney Ross) is still the main character and does as good as he did in the first film. Jason Statham (Christmas) doesn’t feel quite as important, but he’s freaking Jason Statham and that makes him awesome. Nan Yu (Maggie) was a good choice, even though I would’ve preferred an already established action starlet. She’s attractive, can act and her fight scenes were believable. Liam Hemsworth (Billy the Kid) didn’t irritate me as much as I thought he would. In fact, he was acceptable. Chuck Norris (Booker) shows up and is awesome. Every scene he’s in is golden and he’s just used perfectly. Looks great for a guy in his 70’s! Jean-Claude Van Damme (Vilain) has some fun as the villain (subtle name, by the way), but he’s underused and isn’t as compelling as Eric Roberts was. Scott Adkins (Hector) reuses his Boyka voice from “Undisputed 2” and is actually more menacing than Van Damme! Wish there was more of him. I LOVE YOU SCOTT ADKINS *kisses*! Arnold Schwarzenegger (Trent) was a bit rusty in terms of his delivery and I thought he went way too far with the “I’ll be back“-esque references. Nice to see him back though. Bruce Willis (Church) does fine, although this is still the more modern day, boring Bruce Willis. I want to see the same Bruce from “Die Hard“, dammit! Sadly, the roles of Randy Couture (Toll Road) and Jet Li (Yang) are reduced, with Li bowing out after the first major action scene. Couture is just…there. At least Terry Crews (Hale Caesar) was more prominant as the comedy relief (he’s funny) and Dolph Lundgren (Gunner) also has some great moments. I actually wish that the movie was longer so everyone could have more to do.

Are there any downsides? Well, the Jet Li thing made me angry, but it comes down to what your priorities are when it comes to a movie like “The Expendables 2“. The film wants to be a fanboys wet dream and I was its target audience. When you think about it, half of the cast wasn’t even necessary. Schwarzenegger and Norris were tacked on additions to the script and could’ve easily been omitted. If you want to warp that into a criticism, you can say that them being there is at the expense of story or character development, but I wouldn’t care. I don’t watch this movie for any of that. I watch it to see my favorite action stars kick ass, shoot people, blow things up and interact with other action stars who also kick ass, shoot people and blow things up. If there’s anything that really bothered me, it’s what it didn’t do. I was upset that Jet Li never fought Adkins or Van Damme, especially considering how the first film was generous enough to pair up Li and Lundgren. But as a whole, “The Expendables 2” is a well crafted actioner that made me laugh, cheer and fangasm at once. Like the first film, there’s a lot of entertaining banter amongst the characters and their chemistry is on the money. But the director makes sure that this is not a rehash by approaching the movie very differently. To me, that is what sequels should do. Be faithful, but not redundant.

Violence: While it’s mostly CGI gore, it is still pretty awesome. Rated R, although it’s not quite as gruesome as before.

Overall: “The Expendables 2” was a blast and I’d recommend it for anyone who likes 80’s/early 90’s styled action movies, even if you didn’t care for the first film.