(Written and Directed by Neill Blomkamp) 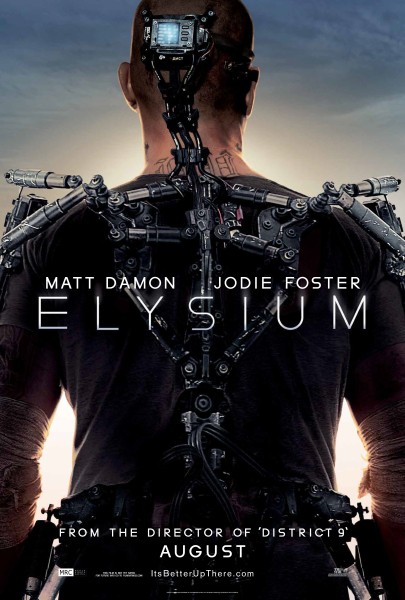 Plot: By the year 2154, Earth has become a wasteland and the wealthy have taken refuge in a floating space station known as Elysium. The poor are forced to fend for themselves, lacking the same medical treatments and privileges. Max (Matt Damon) is a troubled but reformed criminal who learns he has 5 days to live and the only available cure is on Elysium. His only chance of survival is breaking into the asylum, but does he stand a chance?

When stills, trailers and footage of “Elysium” started popping out around the web, it became one of my most anticipated films of the summer- only behind “Iron Man 3” and “Pacific Rim“. Of course, this summer has more or less sucked…so…roar. Then the reviews came out and everyone seemed to be unenthusiastically positive, which dampened my hopes that this would be the redemption of Summer 2013. After letting out a long sigh, however, I had a sudden epiphany. Neill Blomkamp had previously helmed “District 9“, which caused the critics and general audiences to hold hands and circle jerk all over the director…who I imagine had mixed feelings about this. But I was not part of that cinematic bukkake, as I thought “District 9” was wildly overrated. So why would I care if “Elysium” was getting disappointing reviews? I didn’t agree with the critics then, I doubt I would necessarily do so now. But don’t worry, Mr. Blomkamp, I might be the only one coating you in a layer of semen this time around…but at least you have my semen…”Elysium” was a very orgasmic experience.

Critics have praised “Elysium” for being nice to look at (understatement), while criticizing the story as…conventional. Just typing that sentence annoys the pants off of me, even though my pants were already off by the time I wrote this review. These people have the audacity to say “District 9” is original, while “Elysium” is not? “District 9” just took every ‘man becomes what he hates/hunts’ scenario, mixed it with a ‘man on the run’ story, added aliens and put it all in a ghetto. It wasn’t original, it just mixed up the formula a bit so it appeared original. To me, “Elysium” is the same way. It might have a familiar story, but it’s what the story contains which makes it original, in my opinion. For a movie to be conventional, it just has to follow the usual rules that most movies seem to follow. Conventional would be the hero getting the girl. Conventional would be a revelation that the love interest’s (Alice Braga) daughter is his own. The film is constantly going against the norm, albeit in a more subtle and less heavy handed kind of way. Conventional would be a character being dead when a GRENADE BLOWS THEIR FACE OFF. In fact, the face getting blown off thing was already unusual. “Elysium” was constantly going against . Both of Blomkamp’s films had social commentary, but “District 9” used it at the expense of common sense. I can’t buy the Government being so openly abusive to a race with superior technology, when there is the possibility that there are more of them out there. That kind of shit could wipe out humanity. Yet no one in the movie is intelligent enough to figure that out. Here, I felt the social commentary was nicely weaved into the action, story and character ark without rubbing it in our faces. Blomcamp let it speak for itself instead of speaking for it, which is how I prefer social commentary be used.

Many have complained that there wasn’t much in terms of character and this…I can understand when it comes to the supporting cast. The love interest almost seems like an after-thought. Kruger is awesome due to Sharlto Copley’s performance, but the character himself is rather flat (he’s evil, that’s the extent of his characterization), Delacourt (Jodie Foster) is the token evil bureaucrat. Luckily, the actors themselves often make these dull characters work. Foster is the best when it comes to playing cold hearted bitches with authority. William Fichtner (Carlyle) is the perfect sophisticated asshole. Sharlto Copley stole the show, although it’s often difficult to tell what he’s saying. It’s not just his accent either. It seems like background noise was constantly drowning out the audio whenever he was on-screen. Matt Damon (Max) actually gets to act for the first time in awhile. Usually it’s like he’s playing himself, but here I felt he was actually in the shoes of another character. His development isn’t as flashy as what we got in “District 9“, but only because Max isn’t a totally detestable asshole. He’s a flawed, but endearing character who must overcome his flaws. Anyone who says “District 9” had better character development is only saying so because its main character was kind of a racist prick in the beginning. That’s not better storytelling, that’s just one character starting off more unpleasant than the other. But I can forgive the weak supporting characterizations for the same reason I forgave them in “District 9“. They aren’t intended to be fleshed out because they are part of the protagonists development.

But at least everyone agrees that “Elysium” has a purty mouth. Blomkamp balances CGI and practical effects nicely and not a single one looks imperfect. Now let us glare at “Man of Steel” for its more unconvincing effects despite having twice the budget…I’m still glaring…done. One of the things that appealed to me just from the trailers was how the world of “Elysium” looks cool, but not too cool. I love “Blade Runner“, but I hated its influence on science fiction because everyone continues to try to imitate that. “Elysium” is much more grounded in reality when it comes to its sets and props, which helps serve the social commentary. I can totally buy the world becoming like this in 100 years. But the attention to detail is astounding. The robots on earth, for example, look kinda old, rusty, dirty and scratched up. The robots on Elysium, on the other hand, look like they were just painted and waxed. The same goes for the vehicles. The weapons, exo-skeleton armor...It’s all very fascinating to look at. Even if you mistakenly refer to the script as conventional, I don’t see how you can argue the same for this movie on a visual level. It’s not just pretty to look at, but what you’re looking at is like nothing you’ve seen before. The action scenes benefit from this because while there is nothing exceptional about the choreography, the various props use make the battles more memorable. The use of slow motion draws more attention to detail, like when robots blow up. You see what appears to be hundreds of different pieces break away. Speaking of blowing up, the violence is hardcore! “Elysium” wears its R-rating proudly! I did think the finale was a bit too tightly edited though and epileptics should be wary of the flashing lights. Still, Blomkamp even manages to sneak in some epic shots during the quick cuts. Speaking of which, that Kubrick-esque shot of “Elysium” is single-handedly the coolest moment of this film…the summer…the year…and maybe the last five years. Breathtaking! 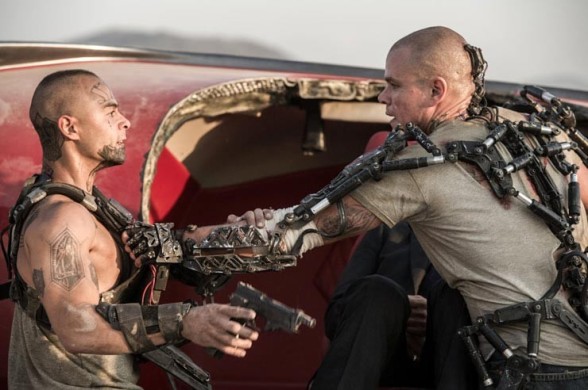 So personally, I don’t get the ‘conventional’ claims. I thought it was just as unique as “District 9“, but it’s not as desperate to draw our attention to its uniqueness. As a testament to this, just consider the ending. If Max fails, then nothing changes and the world continues to turn the same way as it has been doing. If he gets himself cured, it might be at the cost of a lot of people. If he saves everyone, it likely will be at the cost of his life. Furthermore, if Elysium is defeated, it’s strongly implied that nothing will change. Even on Earth, the alleged revolutionaries are charging money to send people on a likely doomed expedition to Elysium. How is any of this conventional? Regardless of how the movie turns out, it will be in its own way, a downer. But above everything, I became attached to the characters, while also enjoying the action and effects. I also genuinely believe that there was a lot of creativity within the visuals and story, so I loved “Elysium“. Now close your eyes, Mr. Blomkamp, because I have another load to shoot.

Nudity: None, but there are mentions of rape.

Overall: “Elysium” is an underrated sci-fi action-thriller. Everyone should watch it, although maybe you should expect a good movie instead of a great one, just so your expectations don’t screw you over.