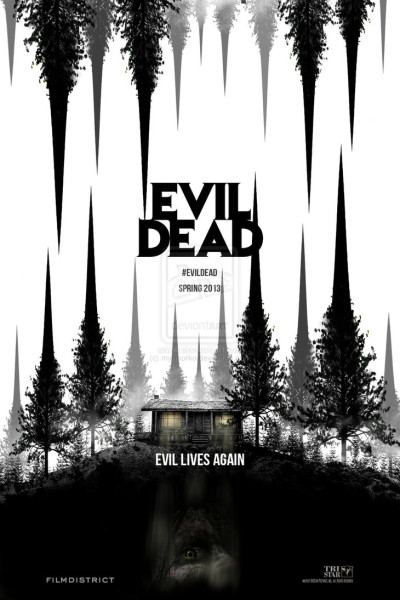 Plot: Mia (Jane Levy) has a dependency on cocaine, so her friends and family take her to a cabin in the woods, where she can kick her addiction. Unfortunately, her friends are morons who accidentally awaken the forces of hell, which proceed to possess and feast upon the group.

Sorry folks, “Evil Dead (2013)” disappointed me. I know, who would’ve ever thought that a remake of a cult classic would be a letdown, right? Well the truth was, I was actually beginning to embrace the hype. The trailers looked cool, the reviews by those who matter (horror fans) were ecstatic and even the critics seemed okay with it. I practically skipped into the theater, but left a little withdrawn. It’s not that “Evil Dead (2013)” is a bad movie. It’s just rather ordinary. It fails as any kind of re-imagining, although granted, so much of that comes down to why you liked the original. On its own, it appeased my tasteless standards as a horror fan, but that’s relatively easy to accomplish. Many viewers were much gentler towards this than I was, so I figure I’m going to get some shit for having my own opinions, but try to understand why I feel the way I do. Some of my complaints reflect the films quality, others are entirely personal.

Let me get this out of the way: I do not dislike this remake. It has some entertainment value, getting into the action quicker than I would’ve expected. There is a lot of violence, but its success isn’t just in the superb gore effects, it’s how they’re used. The majority of the onslaughts aren’t fatal, so expect the characters to take nasty beatings before finally kicking the bucket. This provided plenty of cringe inducing moments. I also appreciated some of its more daring attributes. While the return of the ‘raping tree’ didn’t quite work for me, I did like how a character urinates herself during possession. It’s something that I’m surprised doesn’t happen more often in horror flicks. The bloody rain was a nice touch to an otherwise disappointing finale. When it came to delivering horror set pieces, I thought “Evil Dead (2013)” was above average. It’s not as scary as the original, but…well, that was MY biggest issue. I couldn’t help but compare it to Sam Raimi’s film, which I adore. So let’s put both movies side by side and determine why I prefer the old over the new. 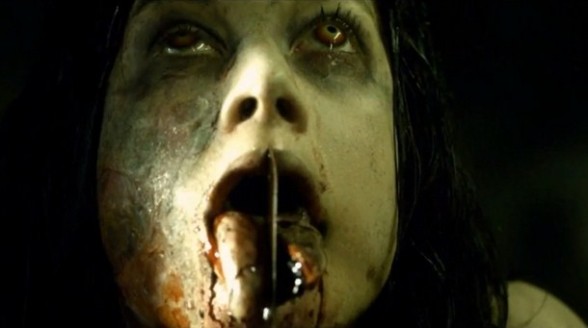 The Story: “Evil Dead (2013)” gives us more information about the demonic entities that wasn’t present in the original. The book contains actual reasons for certain attacks, such as the ‘tree rape’. Now they have more concrete motives. But personally, I liked how “Evil Dead (1981)” shrouded itself in mystery, never giving any real explanation as to how the demons work or why they’re doing anything. They acted like demented, bloodthirsty pranksters who just wanted to toy with their prey, so the ‘tree rape’ had a stronger context  BECAUSE their motives were so abstract. It’s a clear cut case of me preferring ambiguity, so take that as you will. With that said, I’ll be a little forgiving here, as at least this remake is attempting to build its own bridge. However…there are a few implications that “Evil Dead (2013)” isn’t a remake, but a sequel. This raises so many questions that I’m almost a little annoyed that they bothered. Maybe if they do a cross-over, everything will be explained. But as it is, this opened plenty of plot holes and bad writing had the tendency to rise from them. Otherwise, both films share a similar story, even if it’s dressed a little differently.

The Characters: “Evil Dead (2013)” follows a bunch of generic, pretty youngsters whose only noticeable traits make them unsympathetic. Mia (Jane Levy) is a junkie, so at least her freak-outs are understandable, but I can’t help it if I occasionally wanted someone to slap her. Her brother, David (Shiloh Fernandez) is the worst of the lot because he is our protagonist. He’s indecisive about everything and his character arc struck me as a desperate attempt to convey substance. Granted, Ash (Bruce Campbell) was a similar lead in “Evil Dead (1981)”, but there were a few differences. For one, his indecisiveness wasn’t as pronounced. Two, the original was an ensemble piece in which Ash only emerged as the hero because everyone else was dead. Here, David gets the most screen-time, so it’s more obvious that he’s the main character. Three, there was a better pay-off with Ash. He snaps and becomes a badass by the finale, fighting hard for his life. David never really has that transformation. He’s ‘weak’ up until the end, even when he is finally doing something. The other two girls are just kind of dull, although Jessica Lucas (Olivia) at least has SOME personality. Eric (Lou Taylor Pucci) has the most face-palming moments, but at least he’s active, whereas David is just being a boring weakling. The acting is acceptable, with Jane Levy delivering the most exceptional performance. I wish they got a more charismatic actor to play David though, instead of hiring the bland love interest from “Red Riding Hood“. 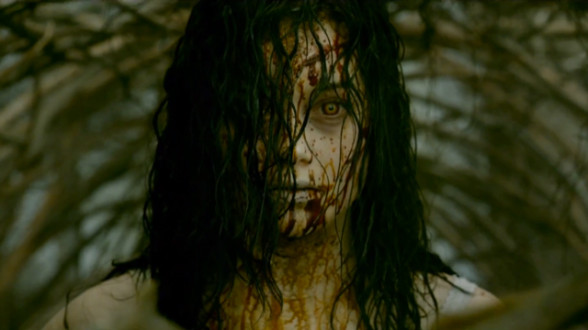 Another problem that plagues the script is that the characters often do stupid things in order to drive the plot. When they read the enchantments out loud in “Evil Dead (1981)”, they were just joking around as they didn’t take it seriously. Here, they find the book amidst dried blood and dozens of hanging cats. I don’t know about you, but that open display of witchcraft is going to keep me from being in a ‘read cursed enchantments from a freaky book’ mood. Having Eric read it aloud, despite being alone, was just very forced. Throughout the rest of the movie, the cast would constantly do something retarded so they can die without problem. “Evil Dead 2” had shades of this, but that film was more comedic in tone. Despite being written by the Queen of over-wittiness herself, Diablo Cody, “Evil Dead (2013)” takes itself too seriously and never provided any real laughs. I wasn’t expecting something satirical like “The Cabin in the Woods“, but if the script is going to be filled with ‘bad movie conventions’, it needs to have a sense of humor about itself.

The Pacing: “Evil Dead (2013)” moves a bit too fast for its own good, although I wouldn’t call it exhausting either. The only objective complaint here is that there are way too many endings. I was sure the film was about to conclude, but it turns out that the third act had only begun. As the finale was so ridiculous (is this ‘abomination’ THAT much of a threat?), I might’ve liked the movie more had it stopped before reaching that point. But generally, “Evil Dead (2013)” is a quick paced film. But I thought the original was more gripping. It had better build-up, stronger pay-offs and the suspense kept things moving. “Evil Dead (2013)” doesn’t spend any time building tension or atmosphere, instead desiring to deliver lots of gore and jump scares. Even though its running-time is short, it started to get a little old. 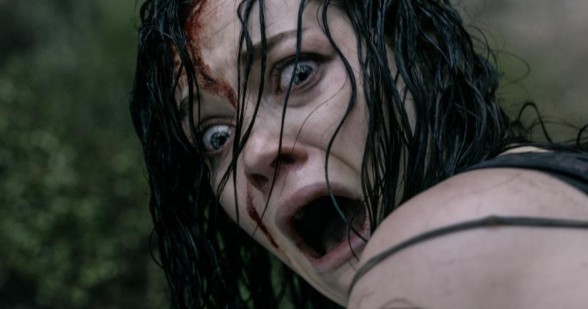 The Scares: “Evil Dead (2013)” isn’t scary. At all. Oh sure, I occasionally flinched, but I never shivered. This is difficult to talk about, as horror is just as subjective as comedy. Many saw “Evil Dead (1981)” as a straight up bad film that was redeemed by its silliness (these people often prefer the sequels, as they are more intentionally comedic). I happened to be in the camp that found original to be rather scary. The ‘POV’ shot gave me chills (it’s back, but without its trademark ‘noise’), the heavy sense of paranoia and fear created its own brand of dread soaked atmosphere (here, there’s just no time for that) and the villains were spookier. In the original, the high pitched cackling and over-the-top mannerisms might’ve been a little silly, but I felt Raimi somehow made the goofiness rather menacing. Here, it’s as if they lifted the demon from “The Exorcist” and placed it in an “Evil Dead” setting. The demons are vulgar and have deeper voices, but they lacked the unsettling playfulness of the creatures from the original. There’s even a “Your Mother sucks cocks in hell!“-esque line. “Evil Dead (1981)” had unique demons. “Evil Dead (2013)” borrows too much from “The Exorcist“, a movie that I adore but am tired of seeing imitated, so that uniqueness is gone. In the films defense, I don’t believe the filmmakers were aiming to be scary. They wanted to simply entertain, but once again, I prefer how the original did it.

That’s all I’ve got to say. “Evil Dead (2013)” has a handful of great moments and a superb amount of gore, while even having some balls to go along with the carnage. As a remake, it doesn’t do ENOUGH different to keep me from comparing/contrasting the two movies. “Evil Dead (1981)” was more in line with my personal tastes. As a sequel, it makes no sense. As its own entity, it’s…acceptable. It succeeds in the areas that matter (gore and…well, just gore), but that’s just the bare minimum. Its predecessors (The Raimi trilogy) gave us more than what was just required. They were gross, funny, clever, frightening and gave us an iconic hero whom we enjoyed followed. They are considered golden nuggets among horror fans for good reasons. “Evil Dead (2013)” is just another splatterfest, having a below average script, an average cast and a lot of gore. If you look around at the genre, you’ll find plenty of films like that. So why does this remake have so many fans? Maybe initial expectations were that low? Even though the hype may have effected my judgment, I’d like to believe that these flaws aren’t just products of my deranged mind. This wasn’t a bad experience, but I’ll probably forget the movie within the month. I thought it was merely ordinary.

Nudity: There is some I think at the end, but it’s pretty hard to tell. The tree rape attack is present, but it’s less sleazy this time around and you don’t see anything.

Overall: “Evil Dead (2013)” is a rental in terms of quality, but others have liked it more than I did and if you’re like me, you’ll almost feel compelled to see it ASAP. Guess I can’t blame you.