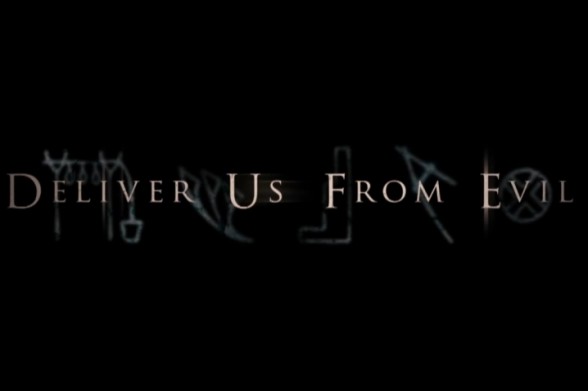 Plot: Sarchie (Eric Bana) is a cop on the edge, who discovers a connection in random cases he is working on: Demonic possession. When he realizes he cannot handle the situation, he enlists the help of an unconventional Priest (Edgar Ramirez)

“Deliver us from Evil” is not quite the good movie I was hoping for, but I found myself liking it all the same. It is not easy being a horror fan as of 2014 thanks to the amount of monotony that has plagued the genre. While I’m willing to praise Oren Pelli for finding ways to get under my skin using very little money, I also have to curse him for discovering the formula for an easy financial draw. Possessions + Low Budgets= Profit. I can’t tell the difference between any of these contemporary possession/haunting flicks because they’re all so alike, although it doesn’t help when they have such bland and interchangeable names like “The Possession“. I don’t remember which one that was, but apparently I only gave it a single star. This rambling might seem irrelevant, but I assure you that there is a method to my stupidness. “Deliver us From Evil” doesn’t contain a single original idea, other than maybe making Joel McHale into a bad-ass, but it takes those familiar possession concepts and blends them with the clichés of a gritty police drama. This mating of genres is fairy unique and it helps that they have chemistry together, making the film seem more original than it really is. This was the sword that “Deliver us From Evil” wielded and strong character writing was its armor…Granted, there is a good deal of rust and chinks within the steal, but that is why I am reluctant to call this a good movie.

Many audience members might shun the loose narrative of “Deliver Us From Evil“. At first, it seems to have a very episodic structure, although everything starts to come together thanks to the script being…possessed…by a dark army of coincidences. Bwahahaha, I’m so anti-clever! I’d usually condemn the coincidences as bad writing, but when your subject matter deals with God, contrived moments can easily be justified as divine intervention. So I didn’t mind that. Nor did I also mind its choice of narrative style, because I did make an attachment to the characters and the world they inhabited- which is the point of an episodic story. “Deliver Us From Evil” was shockingly good when it came to fleshing out and developing its characters, giving all the primary actors plenty to do when it comes to showcasing a variety of emotions. Eric Bana (Sarchie) is one of the few people who can juggle bad-ass with family man, while being so on the edge that he’s kind of scary, yet always likeable even when he’s doing bad things. I’ve always liked Bana, but it always seems like the movies he participates in never know how to effectively use him. He’s always intense, but “Deliver Us From Evil” goes beyond his current typecasting and allows him to show his range. Edgar Ramirez (Mendoza) is a fun character because he’s so unconventional for a Priest and his back-story- from his sins to his quest for redemption- really made him more human than most Priest archetypes. I do think people have overrated his performance somewhat, primarily because I keep hearing ‘show stealer’ and I thought Bana stood out more. Yet he was cool and both Ramirez and Bana had great chemistry. I enjoyed their banter when it came to them, their opinions on religion and the world around them. Joel McHale (Butler) plays a tough guy…AND IT WORKED! I totally loved his fight scenes and his comedic relief persona constantly kept me laughing. I found myself being disappointed when his role began to diminish during the second half, as he’s pretty much replaced by Mendoza as Sarchie’s sidekick. But he made the most out of his limited screen-time. Predictably, the wife and daughter subplot was inanely conventional, without anything added to make it different, but the successes outweighed the failures in the script for me. That’s a rarity within the horror genre, which generally emphasizes gore or scares…Speaking of which…

There are a lot of jump scares and while they did often get my ass off of the seat, they occasionally provoked a smile upon my lips. There is definitely some unintentional hilarity, but I’m beginning to think that it’s part of the territory. When people act possessed, it’s sometimes going to be hard taking their mannerisms seriously. There are some chilling shots and the sound design is excellent. Those creepy noises probably startled me more than the jump scares. But I think Scott Derrickson’s greatest success is how he uses the natural elements and locations to create a sticky feeling of dread. Those back-alleys drenched in rain during the night were so successful that I actually wish day never came…and I’m being literal. The day sequences just fell flat for me, as the lighting sometimes seemed cheap and the direction uninspired, although I don’t know what they could’ve done with these moments. Worse, when night returns, it’s as if Derrickson has to start all over when it came to building atmosphere and tension, which leads to some repetitiveness (more investigating a spooky room?). Personally, I would’ve had the entire movie take place at night, other than maybe the last scene- which would be all symbolic and shit. The finale was a little disappointing too, as it’s a standard exorcism and just seemed kind of rushed, predictable and anti-climactic. It’s not a bad way to go out, it just lacks the needed oomph so it can end on a high note. There are some pretty scary moments, but they occur during the 1st or 2nd act. Usually the third act is where the film will go all out in delivering sheer terror, but it seemed tame in comparison. Once again, it’s not bad, it just could’ve been better.

“Deliver Us From Evil” is more akin to Derrickson’s “Hellraiser: Inferno” than it is to his more popular “Sinister“- which is scarier but less unique. It’s not terrifying, but it kept my eyes glued to the screen, made me care for the characters and their stories, while also managing to get under my skin enough to satisfy my horror cravings. I think it was a bit too safe in certain areas and the daylight undermined the more effective night sequences, but I respect “Deliver Us From Evil” for trying to be a little different. I like that it incorporated more action and laughs than the majority of its kind, while being just as bleak and chilling. Even many of it’s unintentionally amusing moments legitimately made happy, like how Sarchie is never questioned by his superiors even though he’s in the middle of this pile of corpses. In fact, other cops even witness the stranger events, which is also pretty unique. Yet I never thought any of this effected the tone, which is another rarity. So I can forgive its shortcomings, because it’s not ‘just another possession movie’.

Overall: “Deliver Us From Evil” isn’t bad, but it probably only deserves a rental. It does a solid job at giving strong actors meaty roles and isn’t too derivative, but there are some noticeable flaws and it could’ve been scarier. It’s good enough to watch, but I wouldn’t pay too much for it.