Plot: Keiko (Rina Takeda) is the daughter of a highly skilled Sushi Chef, who trained her in the art of martial arts, so she can become a master Sushi Chef herself. However, she apparently doesn’t have much talent for it, so runs away and ends up working at an inn. Unfortunately, when the inn is overrun by mutant, zombie, killer sushi (yes, you read that right), she must use her skills to stop the Sushi Apocalypse from occurring.

If Orson Welles was alive today and he saw “Dead Sushi”, he would hang his head in shame. For all of his accomplishments in story-telling and technical innovations, he never understood the importance of ‘fire-breathing, killer mutant zombie sushi’ in a dramatic narrative. Indeed, many critics have lambasted the infamous rose-bud scene from “Citizen Kane“, because it lacks an emotional punch due to not containing a musical number, performed by an egg-sushi. I believe Roger Ebert even said “How could this supposed master filmmaker stage such a brilliant scene, but overlook the much needed presence of flying killer zombie sushi? Surely this Welles is no Iguchi!“. It was universally agreed that “Citizen Kane” underperformed at the box office due to William Randolph Hearst being upset by the lack of historical accuracy, because everyone knows that he had many close calls with ‘killer mutant zombie sushi’, which could turn humans into zombies by infecting them with their bites. Don’t even get me started on that hack Akira Kurosawa, whose “Rashomon” omitted the segment where the story was told from the P.O.V of a man with a giant fish-head, who had the tendency to sick his ‘killer zombie sush’i on amorous lovers. Cinema didn’t know true greatness until it spawned “Dead Sushi“, a film which contained all of these wonderful things. Clearly “Dead Sushi” is the greatest movie of all time. Okay, so maybe my version of history is…a bit revisionist. Apparently I am the only one who thinks ‘killer mutant zombie sushi copulating and reproducing thousands of baby killer mutant zombie sushis’ equates to high art. It also happens to star my beloved Rina Takeda (“High-Kick Girl“). So not only do you have killer mutant zombie sushi spitting acid on people, you also have them engaging in Karate matches with Rina Takeda. How could I not love this? But yeah…I guess it is sort of an acquired taste, a film tailor made for high brow critics such as myself. You peons who enjoy bottom of the barrel trash such as “2001: A Space Odyssey” will be incapable of appreciating the artistry present in “Dead Sushi“.

What I love about this movie is its consistent ‘wtf’ factor. The premise alone is creatively bizarre and yet that barely scratches the surface. In the world of “Dead Sushi“, everyone obsesses over that particular food. It’s like a religion, except everyone is an extremist. In order to hone your sushi making skills, you must learn martial arts, since apparently sushi-making is a form of karate. Or is karate just a form of sushi-making? Ah, the thematic material that stimulates the mind while pleasing the senses. Speaking of pleasing my senses, you might be wondering if Rina Takeda shows off her mad karate skills. You’re damn right, she does! There are only a handful of actual fight scenes, but the choreography is surprisingly advanced. There’s a lot of fancy techniques going on and everything moves at a brisk pace. There’s a lot of comedy mixed in with these fights and you can definitely see where Jackie Chan may have influenced some of the battle exchanges. Sure, the comedy isn’t on par with Jackie’s, but last I checked, “Police Story” didn’t end with dozens of sushi combining in order to create a sushi battle-ship. Still, the fight scenes are surprisingly good, but you shouldn’t expect a lot of them. Instead, “Dead Sushi” relies on its shock factor. Every scene is followed by an even crazier scene. It never runs out of baffling ideas. Usually, these ideas tend to surround the extreme gore, brilliantly awful special effects or an absurd new gimmick the sushi have just adopted. But when none of that is occurring, you’ll have a scene where characters make-out by exchanging egg-yolk and looking like they’re going to throw up in the process. Or someone will just randomly dance like a robot. Or an old dude will fart in Rina Takeda’s face. “Dead Sushi” is f@cking weird. But because it never runs out of ideas, it never bored me. 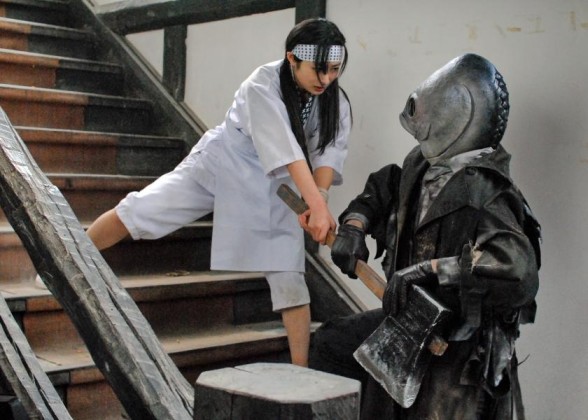 This is my first experience with Noboru Iguchi (“Robogeisha“), but he was very gentle with this Iguchi-virgin. The man has a reputation for relying too much on shock value and that is the main reason why I’ve avoided his films. Some of the content I’ve read about is just TOO weird for me, like how in apparently one of his movies, girls pull swords from their butts…Yeah…”Dead Sushi” is apparently one of his more restrained efforts and that’s probably for the better. As ‘out-there’ as it can get, it never totally goes off the rails. There are a few times where he descends into ‘bad taste’ territory (like when a character attempts to molest some chick, who’s dying in front of him), but most of the wilder moments surround the sushi and what they do to people. It also helps that the film is clearly not taking itself too seriously. Actually, let me rephrase that. It doesn’t take itself too seriously, but part of the appeal is Rina Takeda’s performance. Besides being her only film (which I’ve seen) where she gets to play a relatively normal teenaged girl, she actually is taking the role pretty seriously. Her dead serious reactions to all this mayhem makes the film HILARIOUS. Don’t get me wrong, she herself can be over-the-top and silly, but that’s only when the scene is trying to be conventionally funny. But when the Sushi are attacking her, she doesn’t half-ass her performance or take it too lightly. It’s even stranger because her dramatic moments are surprisingly well acted, while she also shows off some legit comedic timing. Great job, my dear! I also appreciated how sincere the movie is about sushi in general. Somehow, when characters discuss the art of sushi making and what it means to them, I was moved. Then I would break out into laughter, once I would remember they are talking about sushi- which are now trying to eat them.

The special effects are bad, but that’s part of the appeal. Usually. I don’t want to sound like someone who is lost in the purgatory known as the 80’s, but I tended to prefer the practical effects over the CGI. When someone is killed gruesomely, the practical effects are suitably cringe inducing. The latex sushi- which have bladed skin and sharp teeth, by the way- were enjoyably bad effects. The CGI deaths didn’t bother me as much as I thought they would, but the CGI sushi weren’t enjoyably bad. They were just bad. Luckily, the context of whatever scene they appear in would be so daft that I would go along with it anyway. Plus, when thousands of killer mutant zombie sushi are swarming the place, it would be kind of unreasonable to expect the filmmakers to create that many latex sushi (attached to that many strings). So I was able to forgive the awful computer generated imagery. Part of the reason the bad effects work is that they keep the film from becoming too mean-spirited. The kills are gross and outrageous, so the movie never loses its shock value, but it’s too cheesy to take seriously.

“Dead Sushi” was such a fun time for me. I love movies which are able to surprise me. When I first heard about it, I was actually expecting the humans to turn into zombies when they ate infected sushi. When the sushi itself turned out to be the real zombies, I was surprised. Then when the humans became zombies too, I was surprised again. I never knew what to expect. It’s even more hilarious if you’re familiar with the cliches which are present in “Dead Sushi“. It’s common in Japanese films for characters to exposit the obvious, but it’s great here because a character is describing out loud how the Tuna sushi are bullying the egg sushi. It’s hilarious! Perhaps more obviously, the film will send-up monster movies or kung fu flicks, so lines like: “That sushi isn’t like the others!” cracked me up personally because I’ve heard similar lines in similar situations in similar movies, except without the killer mutant zombie sushi. As a horror film, it’s not scary- although it’s not trying to be- but the graphic gore effects did often make me flinch. You definitely don’t want to eat during your viewing. As a comedy, I may have rolled my eyes at the more juvenile stuff, but it never stopped me from laughing. As a martial arts flick, I was impressed at how much work was put into the choreography. If anything, “Dead Sushi” probably had more combat than “Kunoichi: Ninja Girl” (which Rina Takeda had made previously) so it was much more entertaining. It’s low budget, the gore effects might be too crude for you and its sense of humor might be too goofy for you, but “Dead Sushi” was not made for everyone. It was made for me…and Martin Scorsese, who to this day bemoans how “Raging Bull” lacked a friendly egg-sushi who would sit on Jake LaMotta’s shoulder, cheering him on before giving him a peck on his cheek and heroically sacrificing itself. I’m sure we can all agree that would’ve made “Raging Bull” much better. But to be fair, “Dead Sushi” is the top contender for the best movie of all time.

P.S- It was a choice on my part to say ‘killer mutant zombie sushi’ without commas, as it seemed funnier without them.

Nudity: There are a pair of breasts later on, which is weird because it was rather prudish about nudity earlier- even during the sleazy body sushi scene. There is quite a bit of sexuality though, but most of it is implicit.

Overall: “Dead Sushi” is a 5/4 star movie, transcending my rating system, which I am going to have to lower in order to keep your heads from exploding. But don’t let the final rating detract from the fact that this is about killer mutant zombie sushi.