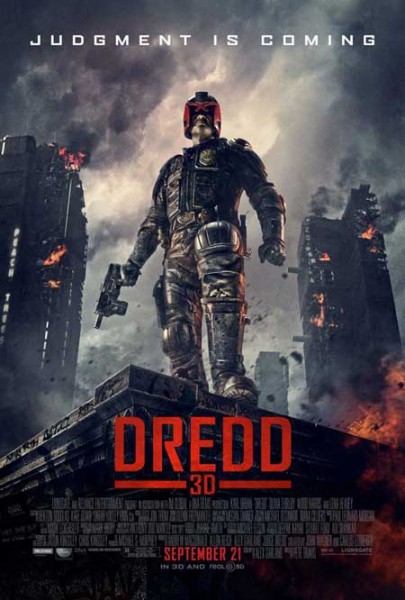 Plot: In the distant future, crime runs rampant throughout the streets. The law is enforced by ‘judges’, who also act as police, juries and executioners. They tend to enact justice on the spot too. Judge Dredd (Karl Urban) is the best of the judges, but he’s being forced to tutor a rookie, mutant, girl named Anderson (Olivia Thirlby). They respond to a crime scene in a 200 story slum tower, run by an infamous Drug Lord called Ma Ma (Lena Headey). Dredd and Anderson arrest a suspect who could testify against her, so Ma Ma puts the building in lock-down. Unfortunately for the judges, the building is full of criminals and Ma Ma orders them to take Dredd and Anderson out. Let the action begin!

I’m not familiar with the “Judge Dredd” comic books, although as far as I can tell, they apparently are a satirical representation of Authoritarianism. Hollywood saw potential in the story so made a “Judge Dredd” movie in 1995, which starred Sylvester Stallone and boasted an impressive budget. Fans were upset with the final product, believing it was a betrayal to the source material. I thought it was reasonably entertaining in a campy kind of way. It’s very “90’s”, complete with dated CGI, an annoying comic relief character (played by Rob Schneider) and the tendency to rip off films from the 80’s. When “Dredd” was announced, supposedly being closer to the comic book, I was indifferent. Comic book fanboys have yet to figure out that comic books and film are two completely different mediums with their own sets of rules. What works in the “Judge Dredd” comic book won’t necessarily translate well on the big screen. “Dredd” certainly has shades of this and honestly, I’m surprised more people haven’t been critical of it. This is probably because the action is bountiful and delicious, so the fans are too busy stuffing their face to notice.

Granted, I say this while letting out a loud belch and running my hand over my stomach contentedly. Fuck any criticism I have directed towards “Dredd”, because it is one of the better action movies I’ve seen throughout the year and I’m dubious as to whether the film wanted to be anything more than explosives, gore, gun firing and slow motion all bottled in a container of awesomeness. But maybe it should have set its sights higher? The film wastes no time getting to the action and it makes a point to avoid any narrative obstructions. There’s no love story back-story, thematic material and there’s very little character development. Whereas Stallone-Dredd was a developing character, Urban’s Dredd is more of a symbol. He represents justice at its most uncompromising. It can even be argued that he’s merely a prop for the action, although he’s freaking awesome as such. I’ve liked Urban for quite some time, but he’s never been so badass. Yet all of this represents something that represents the differences between the two mediums. Some viewers might not find Dredd sympathetic or worse, he might bore them. Films need characters with inner conflicts, personalities and maybe some development. Yet “Dredd” gets by alright because it has Olivia Thirlby as Judge Anderson. She is the films heart and she’s the one who develops. Dredd might get all the action, but it’s really her story. The acting is a vast improvement over the previous film too, although Stallone’s over-the-top “I am the Law!” delivery was pretty amusing. The actors here- especially Urban- make these cartoonish characters seem believable, which is not an easy task. 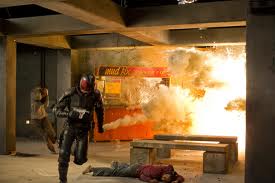 The action is fairly straight forward, not being as over-stylized as “Resident Evil: Retribution”, nor as simplistic as “The Expendables 2”, although I’m not criticizing either film for being such (it’s a matter of taste). There’s a lot of slow motion, but that- along with the weird coloring- gives a trippy feeling to the carnage. Believe it or not, it’s easy to deliver a competent shoot-out, but “Dredd” creates its own brand of action. I’ve seen lots of graphic violence- especially within this genre- but I can’t think of any films that use violence in this kind of way. On one hand, it relishes in the gore. The slow motion will show bullets tearing through cheeks, etc. There’s a weird, dreamlike quality about it though. In a way, “300” comes to mind. On the other hand, the film can be nonchalant about the violence. It’s merely part of the world they live in and some grueling sequences come out of nowhere. Example, the opening car chase has some baddies accidentally running over some passerby. It’s startling and is made even more effective because the movie doesn’t really linger on it. The mayhem tended to go back and forth between poetic and gritty, or surreal and realistic. The combination works and it makes the action rather unique. The movie is also very well framed and edited, with the director occasionally experimenting with the shot compositions. There’s enough shakiness in the camerawork to boost the intensity, but it never becomes incomprehensible. I also appreciated the tactics, the sounds and the props. The weapons alone are awesome because they have so many different kinds of uses. The sets are superb, looking grounded in reality but with a few futuristic touches. You feel the grime of the locations, but it’s never shoved down our throats. How does $45,000,000 “Dredd” manage to ‘look’ cooler than $150,000,000 “Total Recall”?

The film isn’t as intelligent as I had hoped it would be. It’s not on par with classics like “Robocop“, but it’s not dumb either. Unlike “Resident Evil: Retribution”- which was also nonstop action- it never stumbles over its own narrative, nor did it ever make me facepalm. It’s just…simple. It wants to get into the action and the script is only there to boost that action. There are allusions to the themes of the comics- occasionally Dredd goes too far- but any attempt at satirizing or criticizing Police States, etc, is buried under the fact that the villains are so irredeemably evil that they deserve what they get. I would’ve liked a little more substance mixed in with the action, but this is less of a criticism and more of a missed opportunity. Yet it’s also another example of what you prefer, as the 1995 movie explored these ideas somewhat. “Judge Dredd (1995)” is easily more ambitious than “Dredd (2012)“, both visually and thematically. But “Dredd” is more focused and less obnoxious. It has no aspirations to be the previous film. Both have different goals when it comes to story and spectacle, so maybe I shouldn’t be comparing them. With that said, “Dredd” is more my cup of tea. Perhaps I should be drawing comparisons between “Dredd” and “The Raid: Redemption“, since they share similar premises. The latter tickles my fancy a bit more because of the excessive martial arts battles, but once again, it’s a matter of tastes. 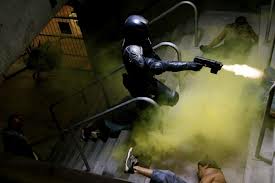 In general, “Dredd” is a matter of taste. If the idea of a killing machine (and his rookie partner) plowing through criminals using guns, explosives, fists, psychic powers (!!) and other bizarre weapons sounds intriguing to you, “Dredd” is your movie. Guess what? Just typing that gave me an erection, so this is obviously my kind of joint. If that doesn’t sound like a hot date, then maybe you should watch something else instead. Based on the pompous comic book fans sucking “Dredd“‘s phallus, I thought I was going to get a hardcore actioner with a brain, like “Robocop“. But I guess that’s my fault for buying into the hype. “Dredd” was a really cool action movie and that is what matters.

Nudity: I didn’t catch anything specific, but there is some sexuality and the threat of rape.