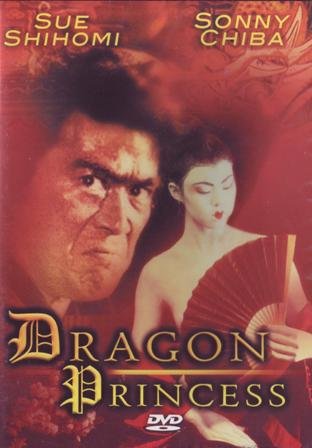 Plot: Yumi Higaki (Etsuko Shihomi) has spent her life training to be a tool for vengeance for her Father (Sonny Chiba), who was crippled by a jealous rival (Bin Amatsu). When her Father passes away, she decides to enter a tournament in order to defeat her enemies, who have chosen to take out the real competition using assassins. Also known as “Hissatsu onna kenshi“.

I’m not going to refer to “Dragon Princess” by its more popular title of “Sonny Chiba’s Dragon Princess“, because Sonny Chiba dies within the first 15 minutes…Either Chiba’s vanity packs a harder punch than his fist or western distributors sent out its own group of assassins who specialize in shit marketing. While it’s a shame that Chiba doesn’t have a more prominent role, at least Etsuko Shihomi (“Sister Street Fighter“) is the lead and has the acting/ martial arts abilities to carry a feature film on her own…Although it’s too bad that her own movies never seem to have that much faith in her…”Dragon Princess” is one of those frustrating experiences where you can practically see a martial arts classic hiding beneath the surface, but every time it tries to show itself, crappy writing punches it in the balls. Admittedly it’s a pretty damn good punch, as every punch and kick within “Dragon Princess” is impressive. The lean running time is full of kick-ass ass-kicking, but after a strong set-up, I just kept feeling like it could’ve been so much more.

One of the quirks of the martial arts genre is seeing the different fighting styles from different cultures. Chinese kung fu in cinema tends to emphasize acrobatics, but “Dragon Princess” is a Japanese production that uses Karate. The focus is more on the power and execution of simplistic techniques- nothing too fancy, with the fights being much more pragmatic. Characters in “Dragon Princess” usually will kick, punch, chop or gouge the eyes if they’re not using weapons, but the actions and reactions are so fast that the choreography doesn’t lose any of the kinetic energy that you would expect from a kung fu flick. That has always been the problem with karate in film, as it’s so boring on an aesthetic level compared to kung fu. This has nothing to do with the martial arts and more to do with the Chinese altering their styles to look more exciting for the benefit of cinema. One of the best things about Sonny Chiba is that he drew a significant amount of influence from the Chinese and used that to give his Karate some flashiness. “Dragon Princess” brings to life all these positives, with every fight managing to be intense and fast paced. There is quite a bit of violence, giving the battles a much needed brutal edge. Sonny Chiba only gets one fight, but it’s as good as his fights always are. Etsuko Shihomi is excellent, having a strong presence and always looking authentic in her badassery without over-selling it. Yasuaki Kurata is the source of many flaws within “Dragon Princess“, but he was one of the best cinematic fighters of his time. There is only one major one-on-one battle- Etsuko Shihomi Vs Yasuaki Kurata, but it’s easily the highlight of the feature. Otherwise, expect plenty of one-against-all brawls. The gimmicky assassins bring in some weaponry, which is the source of the majority of violence and they kept the choreography from every going stale. The final duel is a little disappointing on a technical level, as there aren’t many moves and it’s shockingly short, but it’s also fitting when you consider the characters involved.

“Dragon Princess” does have a competently written set-up, but the narrative falls apart around the half way point and final result is rather bizarre. Yumi Higaki’s character arc is…unstable. It’s revealed that she hates karate during the first act, but this never comes up again and outside of her wanting to avenge her Father, there’s nothing else to the character. Did she learn to appreciate karate? If so, that would make it more heartbreaking when she is injured and will possibility lose that ability. Or maybe it’s a relief? I’m not sure, as the film doesn’t seem to be that interested in its leading lady. Etsuko Shihomi sometimes does show her charm, but these hints of a personality only make you wish there were more scenes with her evolving as a character. This becomes frustrating because Masahiko Okizaki (Yasuaki Kurata) hijacks the plot and keeps the focus away from its protagonist. Even though both actors had a similar dynamic in “Return of the Sister Street Fighter“, he felt more organic to that storyline and there was time dedicated to them bantering. Here, they don’t interact much because their stories run parallel to each-other. He isn’t a love interest either. What in the hell was with that scene where he dances with the naked chick? I’m aware that every 70’s Sonny Chiba production was contractually obliged to have some sleaze, but those same contracts also demanded at least one rape scene and “Dragon Princess” managed to get out of that one…Couldn’t they at least have woven the fanservice more firmly into the narrative so that it wouldn’t feel so superfluous? What was with that Yakuza subplot? There’s a random segment dedicated to the tensions between our heroine and local thugs, but it never ties into anything important. All of this feels like filler and that is not a good thing when your movie is only 81 minutes long. What baffles me is that it seemed like the writers had gift wrapped an incredibly cool story, only to accidentally forget what they put in the package to begin with…I wanted to see the tournament. This could’ve allowed the male and female leads to develop some chemistry while providing different styles, more intrigue and most importantly: Removed the fat. Yet the big event never happens, despite so much build up for it.

There is a lot of unintentional hilarity, such as some obvious stunt doubles and funny dubbing. To be fair, the voice acting is usually pretty solid, but one of the villains has this girly Bruce Lee battle cry which is impossible to take seriously. There are some blunders in the dialogue, such as when Higaki claims that the antagonist killed her Father…He didn’t…The flaming stunt-man was also a very amusing effect. “Dragon Princess” swims naked in the sea known as the 1970’s, so expect some eccentric aging. The camerawork has that weird, trippy zooming effect that was popular during that time, although it complimented the fight scenes nicely. There are moments of inspired direction, such as the western themed opener, which I thought was very moody. Japanese productions tended to be more competently made than their Chinese counterparts, boasting bigger budgets and artistry driven filmmakers, this being no exception. The score is very funky and will either charm you or get on your nerves, because it’s traditional 70’s music.“Dragon Princess” is worth watching for its strong karate choreography, the lovely and charismatic Etsuko Shihomi and the Narm Charm. But the flimsy script keeps me from loving it and even worse than that, I feel like I’ve already seen this before. If you’ve seen the “Sister Street Fighter” movies, then you’ve practically watched “Dragon Princess“. Yet it’s still solid entertainment.

Nudity: There is one scene where a chick dances naked for no reason and another where you see pictures of nude women. But this isn’t as sleazy as other Japanese karate-themed flicks of the 70’s.

Overall: “Dragon Princess” is a good karate flick, but doesn’t seem to know how a narrative is supposed to work.