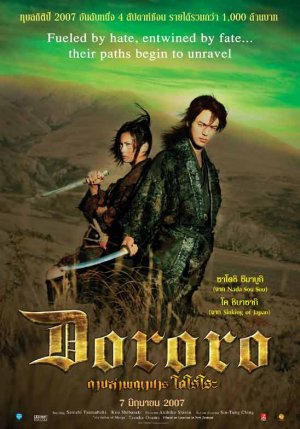 Plot: Lord Kagemitsu Daigo’s (Kichi Nakai) clan is about to be wiped out, so he makes a deal with 48 demons. In return for power, he must give his sons body to them. What’s left of the child is subsequently abandoned, but he’s rescued by a shaman who gives him new, artificial parts. 20 Years later, the boy has grown into a man (Satoshi Tsumabuki) and he wants his body back. Using a mystical blade, he begins to hunt down the demons who ripped him apart. Every time he slays one, a body part returns to him. During his quest, he befriends a thief who starts calling herself Dororo (Ko Shibasaki) and together their adventure begins.

Part of me wants to pat “Dororo” on the back, but another part of me wants to smack the movie on the side of its head. I’m a sucker for Samurai features, but it really tickles my pickle when you throw monsters into the mix. I’m so partial to the combination that I not only enjoyed “Kibakichi: Werewolf Samurai”, I even liked the sequel. Oddly, I’ve yet to watch the “Daimajin” trilogy, which apparently has samurai fighting giant monsters. But I have now seen “Dororo”, which apparently is based off a manga that I’ve never read. “Dororo” is one of those ‘almost good’ movies. It does a lot right, yet its positive attributes are dragged down by the flaws. But I did get to see Japanese warriors fight some bizarre looking monsters, which was exactly what I wanted out of it.

“Dororo” starts off strong. An injured Lord stumbles into a spooky temple and makes his pact. The demon statues are unnerving and even that fake, little, rat thing was chilling. But its the moody lighting that brings everything together. Even though “Dororo” does not maintain this tone for long beyond the opening, it still found ways to captivate me. The violence is shockingly hardcore, but never overly excessive. The costumes and sets blend outlandish with authentic and the combination looks good on-screen. The interiors are detailed, while the wide shows exploit the gorgeous scenery. The film peeks when Dororo and Hyakkimaru (the protagonist) become unwitting guests to a family of monsters. When we see the ‘feeding den’ and realize that this family targeted helpless orphans, it is a startling moment. A creeping dread is prevalent throughout the whole segment, but it never becomes too dark or grim. Sure, the CGI is iffy, but the director did a solid job of covering up those weaknesses. The action was pretty stylish too. There’s a lot of wire-work and CG infused with the choreography, but it felt right within the context. But this energy begins to dissipate around the half way point. 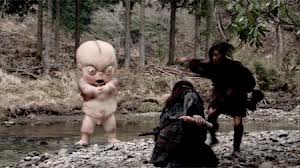 After the encounter with the monster family, the movie begins to lose sight of itself. The tone suddenly becomes more lighter, the action is goofier and the director doesn’t bother trying to cover up the phony special effects. Sometimes they’ll use a man in a “Power Rangers”-esque suit or some giant puppet, but then the CGI extensions only make it sillier. Even more jarring, the film never seems to end. There was already too much time spent on the back-story, but at least that was interesting. By the time characters start rambling about how vast the Ocean in, I started to get very impatient. There are a lot of melodramatic speeches that are supposed to be ‘deep’ and moving. Sometimes it works, due to the strong acting, but generally it just feels self indulgent. The comedy, drama, horror, action and fantasy worked well together during the first hour. But they all seem to be at war with each other during the second half. The slapstick antics don’t mesh well with the tragic moments. It’s quite baffling and sometimes embarrassing to watch.

So yeah, the effects usually suck, the melodrama is sappy and it’s probably 30 minutes too long. But it’s not like the last hour totally fails. While there isn’t enough of it, the fight scenes between humans are actually really well choreographed. There are a lot of fancy and stylish moves. The battles against the monsters tend to be gimmicky, but I suppose they’re acceptable for what they are. The cinematography is always breathtaking, never losing its edge. The monsters are creatively designed. The score seems to be drawing inspirations from spaghetti westerns- one of my favorite sub-genres- so that brought a smile on my face. Finally, the acting is startlingly good. I expect this from veterans like Kichi Nakai, but I was mostly impressed with Satoshi Tsumabuki. Everyone tends to praise Ko Shibasaki, whose performance borderlines charming and annoying. Maybe she’s earned the hype because everyone remembers her as the psychopath from “Battle Royale”? She does good, but Satoshi Tsumabuki has the most interesting character. He begins as an emotionless hulk but develops into a normal person. He certainly wasn’t just a pretty face.

“Dororo” is a hard movie to figure out. It starts off strong, but slowly descends from good to ‘so bad- it’s good’. It’s like the director suddenly realized how ridiculous the premise and setting was, so jacked up the camp value and figured the audience at least could laugh at it. But then he changed his mind again and decided that he wanted this to be a big boned drama, where characters will ramble about the meaning of life or some shit. Perhaps that isn’t correct and the truth is they ran out of money before filming wrapped up. Or maybe the director started getting pretentious while being unable to sustain the correct tone. Or maybe the manga is the root of these flaws, but because it’s a totally different medium, the source material just can’t be translated into film. Regardless, I will admit that I usually enjoyed myself, even if it sometimes was for the wrong reasons. The first half is so successful that I wish the producers decided to scrap the rest of the movie and end it there. Then I could just bitch about the sequel. But the second half has plenty of entertainment value too, if you decide to look at it as a bigger budgeted version of “Alien Vs Ninja“. The badness is sort of charming, especially when it tries so hard to be thought provoking. So I’ll just pat the movie on its head and call it my “special” film.

Violence: PG-13 worthy, probably. Most of the violence is done against monsters.

Overall: You’re either going to appreciate “Dororo” for its strengths or laugh it off the screen for its weaknesses.