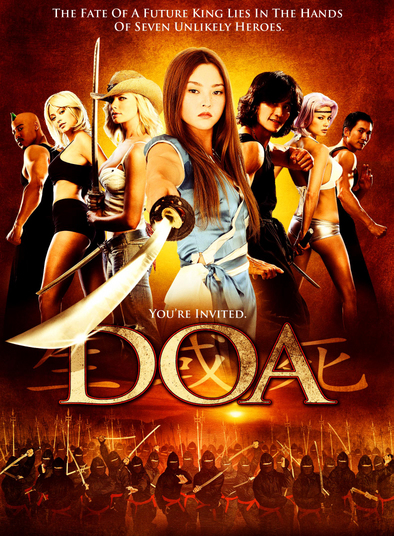 Plot: Kasumi (Devon Aoki) learns that her brother, Hayate (Collin Chou), perished in the last “Dead or Alive” tournament. She abandons her clan in order to enter the next tournament herself, so she can discover what happened to him. She’s followed by her loyal bodyguard ,Hayabusa (Kane Kosugi), and her brother’s girlfriend, Ayane (Natassia Malthe), who is honor-bound to kill Kasumi. When Kasumi arrives at the island resort where the fights take place, she meets and befriends some of the other fighters. The first is Tina (Jaime Pressly), a professional wrestler who wants to prove that she’s not a fake. The second is Christie (Holly Valance), a thief who is in it for the money. The third is the daughter of the man who created the tournament, Helena (Sarah Carter), who’s just…there. But it turns out that the host of the tournament, Donovan (Eric Roberts), has nefarious plans for them all.

“DOA: Dead or Alive” is a difficult movie to review, for it is about as awful as it is fun. I have no loyalty to the video games because I only played one of them along time ago, although I presume that this 2006 adaptation isn’t especially faithful to the plot. But I am a fan of breasts and kung fu, so I knew I had to see it. I’m actually one of the four people who bothered watching this when it was released on the big screen and even then, I was sure I was about to take a bite out of a shit sandwich. But it turned out to be a rather amicable experience. Does this make “DOA: Dead or Alive” a so bad-it’s good experience? In some ways, maybe. But I’d argue that the movie just manages to be entertaining despite how bad it is. 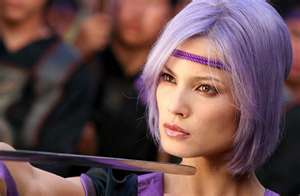 If the movie does anything objectively right, it’s delivering nice scenery, even if it is very phony looking and digital. I appreciated the weird color pallet, the over-the-top settings and the crazy backgrounds. But it’s not enough to redeem an entire feature. So why do I find it so fun? It’s certainly not the fight scenes. For the most part, the fight choreography relies on trickster editing, because most of these ladies aren’t real martial artists. So a character would throw a punch, probably in slow motion, and then it would cut to their enemy dodging the punch, probably in slow motion too. Even though this is a lame way to deliver combat sequences, the fights do sometimes achieve a flow. Other times they are just too baffling to take seriously. A lot of the techniques used are needlessly overcomplicated for the sake of looking cool and they instead look pretty silly. Honestly, I was never really annoyed with the fight scenes, nor was I impressed by them. Sometimes they work, sometimes they didn’t but other than the mass quantity, my enjoyment levels didn’t really come from them.

Is it the boobies?

The video game is notorious for being so shameless about its exploiting of the female body, and that’s the only reason why anybody remembers the games. “DOA: Dead or Alive” follows in their footsteps by making sure that the camera continuously lingers over breasts, crotches and buttocks, all clad in nice bikini’s. While yes, the fight scenes provide the most fanservice here, sometimes a character will just be walking and the camera will start perving out on us. The movie CONSTANTLY does this too and it helps that the women in question are hot, so did this drive the entertainment value? Nope. Well, probably. If it was the only reason for it though, I’d have to imagine that “Piranha 3DD” is better than everyone is saying it is. But I do think that the fanservice boosted my fun. 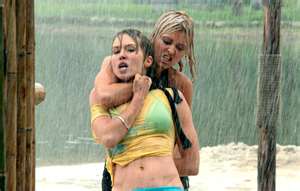 Is it just so bad that it becomes good?

As I said, no, but I won’t discount the possibility either. The film has this genius plan to bombard us with so much stupidity and crap that we immediately become numb to the badness. Every scene leaves you face-palming until you’re too busted up to bother and just start rolling with it. Having Kasumi jump out of the clans flying castle (!!) and revealing that she happened to have a hang glider underneath her kimono (!!) is one thing, but the DOA officials knowing her exact location in the sky so they can send her the invitation? Er, that’s too stupid. Then it gets worse when Christie is introduced. The guy who’s supposed to be arresting this noted badass hands her a bra…on the barrel of his gun (!!!)? Shortly after that, I ceased caring about the clumsy relationships, the poorly resolved plot threads and the ridiculousness of using super-powered sunglasses to give Eric Roberts the powers to create a stunt double that does martial arts (!!!!). My brain was already dead. When the script isn’t lowering its viewers IQ, the editing is causing more brain damage with its lack of continuity. A character will be holding something in one hand and a shot later will have it in the other hand. It never stops! But in my eyes, the so bad-it’s good claim only works when there is good stuff to latch onto as well. Example, “Troll 2” is fun not because it’s awful, but because it’s so incredibly strange, abstract AND awful.

Is it the actors (or actresses)?

Sometimes the cast can save the movie if they charm the audiences. “Scream 2” is my favorite example as the direction is forgettable and the script is full of holes, but my adoration of the cast and how they played the characters assured that movie a positive rating. Did “DOA: Dead or Alive” benefit from this too? Devon Aoki (Kasumi) has never been a great actress, but this might be her worst performance to date. She delivers every line with no emotion and while she’s interesting looking, she apparently wasn’t hot enough to attract the camera too much (although I don’t find her unattractive). Jaime Pressly (Tina) gives us the best performance. She’s more-or-less playing the wrestling version of her character from “My Name is Earl”, but it works. Holly Valance (Christie) is technically the hottest, but her acting skills are rather forgettable. Eric Roberts (Donovan) is upstaged by his own miscasting, but he’s very entertaining. Sarah Carter (Helena) was my favorite. She’s just so damn cute and charming. Kane Kosugi (Hayabusa) is the son of Sho Kosugi (“Revenge of the Ninja”), but his acting skills aren’t any better than his Fathers while he also lacks his old mans charisma. Natassia Malthe (Ayane) is wearing a pretty wig, but her performance isn’t very good either. Matthew Marsden (Max) lets his charm do all the acting for him and Kevin Nash (Bass) is pretty amusing as Tina’s Father. Robin Shou (pirate) and Collin Chou (Hayate) are wasted, but Shou is pretty funny. Am I forgetting anybody? Oh yeah, Steve Howey (Weatherby) does fine, but he will always be Stan Helsing to me. The cast is impressive, but the acting is not. While once again, it’s part of of the greatness of this movie, it isn’t the foundation of it. 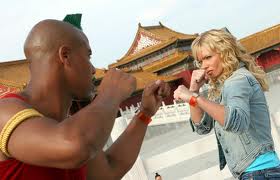 Well, all of the above certainly helped, but I just think this movie was beautifully paced. It doesn’t move too quickly, allowing the characters personalities to be part of the story. With all of these subplots, the film could’ve easily become confused or lost, but it mostly balances these stories pretty well. My only complaint is that most of them are resolved rather poorly (especially the Ayane subplot). But when characters aren’t fighting, they are having goofy interactions with each-other, playing volleyball, showing off skimpy clothing and sunbathing in the gorgeous scenery. Plus, the plot might be bland in itself, but so many bizarre additions give it flavor. I mean, that sunglasses twist was so retarded and amazing. The films attempts at humor aren’t successful, but they work because they’re so weird. There’s something uniquely breezy about it, but it also has its memorable attributes. Is it a good movie? Hell no, but I had a lot of fun with it. That’s more than I can say about “Tekken”, “Street Fighter: The Legend of Chun-Li” or “Mortal Kombat 2”, all of which might’ve been technically superior (well, maybe not the latter), but were a lot more generic and boring.

Note: It’s a martial arts movie, so is listed as such.

Violence: Some fight scenes, but it’s nothing too bad for the PG-13 rating.

Nudity: If you slow down in the right spots, you MIGHT see something. Otherwise it’s just teasing us with “almost naked” sequences. But it was hot anyway.

Overall: “DOA: Dead or Alive” is worth watching if you want cheesy, stupid fun. I love this!