Plot: An eccentric, womanizing magistrate who has earned to nickname Dora-heita (Kôji Yakusho) is charged with cleaning up a corrupt town. To do this, he has to take down three ruthless Yakuza lords.

The Club of the Four Knights was a short lived production company created in order to produce films by four of the most legendary filmmakers of Japan, Akira Kurosawa (“The Seven Samurai“), Kon Ichikawa (“The Burmese Harp“), Masaki Kobayashi (“The Human Condition“) and Keisuke Kinoshita (“I have no idea who this guy is and that embarrasses me“). At least that is the official story, as it has been suggested that the club was only created in an attempt to salvage Kurosawa’s failing career. It dissolved when Kurosawa’s “Dodes’ka-den” bombed financially and critically, making the club a failure regardless of its intentions. Yet prior to that ill advised project, the four Knights banned together to write “Dora-heita“, which was deemed too expensive and was promptly discarded. Thirty years later, the Knights had all passed away from natural causes…except Kon Ichikawa, who was not only alive, but he was also working. He decided to bring the script to life and “Dora-heita” was finally produced. Upon its release, it was met with unanimous disappointment. Critics and general audiences conceded that it was a solid flick, but with so many important figures behind the project, they expected more. 13 years after that, a lone critic who was known for arguing that a movie about fire-breathing, man-eating, zombie sushi was superior to “Citizen Kane” would come across the flick. That critic…was me…Seriously, as much as I adore the majority of Kurosawa’s flicks, I’ve always made a point to avoid being a biased fanboy. Even the master has made a few misfires, such as “The Men Who Tread on the Overlong Title” and “Sanshiro Sugata 2: Why does this resemble a B-movie when its predecessor did not“, so I don’t expect “Rashomon” from everything he touches. The same goes for all of these guys, although “The Burmese Harp” and its remake were the only Ichikawa flicks I have viewed (I was impressed). I liked “Dora-heita“, believing that it provided fun characters, an engaging story, a quirky sense of humor, exotic locations, fine cinematography, an eccentric score and awesome fight scenes. It might not be the best samurai flick of all time, but neither was Masaki Kobayashi’s “Samurai Rebellion“. I’d even say it’s comparable, if not superior to Kurosawa’s “Sanjuro“. “Dora-Heita” is a lot of fun. Anyone who says otherwise just had unreasonable expectations…or simply a different opinion than mine, but I like to pretend those do not exist.

Every reviewer seems to want to compare “Dora-heita” to “Yojimbo“, but I think that’s an oversimplification. In that film, a Ronin pits two gangs together so he can crush both while making a fortune in the process. Here, the titular character isn’t a ronin and while he does try to create rifts between the gangs, he quickly learns that’s probably not going to happen. Instead, he comes to realize that these gangs must have ties with the Government, so dedicates his energies to discovering the truth. I felt both films were very different in both story, character (Mifune’s Yojimbo is more akin to a stray dog, Yakusho’s Dora-heita is more of a stray cat) and presentation. It’s structured more like a Zatoichi flick in that there is the primary plot, subplots which ultimately tie into the primary plot and additional story threads which add little to the plot, but enrich the story that much more…Or at least that’s the goal. “Dora-heita” has been accused of being too disjointed and I kind of agree. The romance angle, while charming, doesn’t flow very well with the rest of the movie. The league of gentlemen gets a bit too much screen-time for a guild whose purpose is more-or-less to be a red herring. But do you know what? I never had a problem with it. I thought the actors did a great job at keeping their characters engaging, which kept the story engaging, which kept the overall movie engaging. “Dora-heita” is also surprisingly funny, but the comedy is scaled down so it doesn’t rely too much on over-the-top mugging or physical comedy. It’s amusing, but I can actually see real people acting like this. 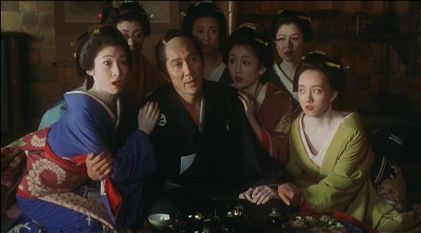 “Dora-heita” isn’t an action flick, but it does have more fighting than most reviewers let on. The sword play is epic, violent and is often shown using strange, experimental camera techniques (you’ll either love or hate them; I’m split, but admire the effort). The choreography looked highly dangerous, adding to the intensity and the action is framed flawlessly. The sets are very reminiscent of Chambara flicks from the 60’s and 70’s, although there is a lot more detail to the locations- which the cinematographer is sure to exploit. The casting was on the money too, because even minor characters look very unique. They are rugged, dirty and appear dangerous, even though they’re often the clowns. The score was definitely a throwback to the 70’s, being somewhat funky, but it fits perfectly within the tone. The only criticism I’d level at Kon Ichikawa’s direction is that the pacing at times is unnecessarily slow. There does reach a point where seeing Dora-heita drunk and acting like a buffoon starts to get old, even if he has a plan underneath all of his foolishness. But my overall biggest criticism is that as enjoyable as “Dora-heita” is, I don’t think I’m going to remember it. I’m not entirely sure why either…it’s thoroughly well made and I connected to it on an emotional level, but it’s just lacking something. Hmmmmm….

I’ve come to the conclusion that “Dora-heita” is a good film, but not a great one. But whereas previous reviewers have expressed disappointment, I personally think it’s silly to presume that every film of any of these filmmakers is going to be on par with “Hara-kiri” or “Ran“. Yet I get the feeling that most of the critics remember these filmmakers ONLY for their great films, forgetting that their classics only make up for a small portion of their filmmography. In the eyes of many viewers, Akira Kurosawa has only made great works like “Ikiru“, overlooking lesser films like “The Idiot”. People did not enter “Dora-heita” expecting a good, maybe even great Samurai film. They wanted another “Seven Samurai“, even though the vast majority of Kurosawa’s films aren’t as good as “Seven Samurai“. I apologize for using more examples of Kurosawa’s works, but I don’t know enough about Kon Ichikawa- who is the real Captain of this project- and think Kurosawa’s name is probably what drew in most viewers anyway. “Dora-heita” is a strong film that was victimized by the unreasonable expectations of its audience…Were you aware that the movie which crumbled the Club of the Four Knights, Dodes’ka-den, was primarily criticized BECAUSE it wasn’t as good as Kurosawa’s best films? That’s how unfair “Dora-heita“‘s critics can be. “Dora-heita” deserves credit for being a stellar movie, instead of being criticized for failing to achieve ‘classic’ status.

Overall: “Dora-heita” is a good samurai flick, although expect more plot than action.