(Written and Directed by George Barry) 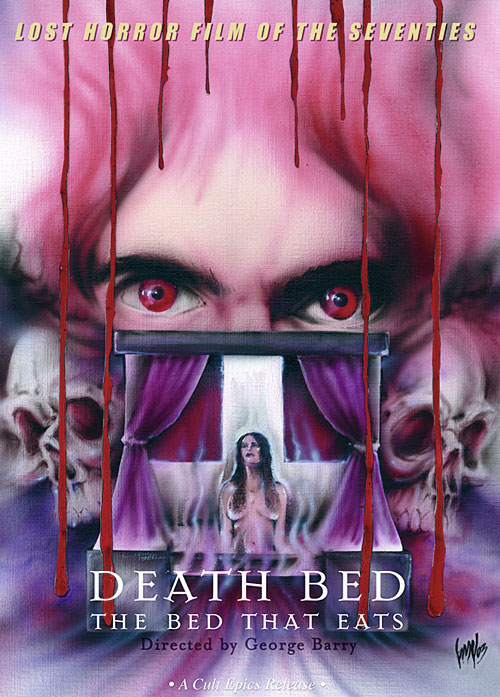 Plot: Various unsuspecting victims are preyed upon by a murderous bed (!!), while the spirit of an artist (Dave Marsh, but voiced by Patrick Spence-Thomas) watches and contemplates its existence.

Not since “The Gingerdead Man” have I pranced around like an idiot, telling all who would listen how about I planned on watching a movie about a killer bed. A KILLER MOTHERF@CKING BED! If that is not the greatest concept ever conceived by man- if writer/director George Barry is not the demi-god I suspect him to be- then I don’t know what is. I remember hearing about this movie a few years ago and envisioning a bed walking around with a machete in its…whatever beds use for hands, slaying whores before ultimately being destroyed by the virgin. But then I had to watch some video reviews of the feature and learned- much to my disappointment- that “Death Bed” isn’t about a machete wielding bed. It’s about a bed that sits there, waiting for somebody to sit, sleep or have sex on it before it dissolves them in its stomach acids. Yet that didn’t stop my excitement! But like “The Gingerdead Man”, I have this tendency to forget that these epic gimmicks usually disappoint me. Will “Death Bed” be another letdown? NO! It was just as bad as I expected it to be! So take that “Death Bed”! You tried to trick me, but I saw through your ploy! BWAHAHAHAHA, but seriously, the movie is…weird.

What’s so bizarre about “Death Bed”- besides the fact that it’s about a killer bed- is it seems to think it’s “art”. One gets the impression that the director probably had aspirations to become the next Fellini, but the only work he could find was some grindhouse fodder about an evil bed. But that wouldn’t stop him from making “art”! I’ve seen artsy horror features before. In fact, arthouse traits are surprisingly common in grindhouse cinema. But this ditty takes it to a new level. The first thing we notice is how desperately Shakespearean the dialogue is. Every line is immaculately written, but instead of coming across as poetic, it instead reeks of self importance. Naturally, you can expect symbolic imagery, experimental camerawork, an eccentric score and lots of strange noises occurring in the background. The dialogue is dubbed over and half of the time, you can see that the characters mouths aren’t even moving. Was this supposed to be a silent film and someone changed their mind during the post-production process? Who knows! But at least the scenery is pretty and I did like the balance of arthouse and macabre. I can’t totally bring myself to hate a movie that has roses growing out of some chicks skull. Reminds me of my first date! The color scheme is very appealing. There’s a lot of purple, yellow, red, white, etc and they contrast off of each-other nicely. It is a good looking film, although the editing is very choppy. The transitions tend to be awkward, but I suppose that might add to the strangeness of the feature. 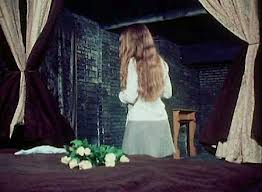 I know it sounds like I’m mocking the film, but at least it caught my attention with its overall strangeness. Unfortunately, as the running time moves along, it becomes apparent that there isn’t enough story for a full length feature. A lot of the scenes aren’t really necessary. When 60% of your movie feels like backstory, something is WRONG. Other scenes just go on for too long. The worst has to be when a girl barely escapes the beds wrath and for what feels like three hours, we have to endure her slowly crawling to the door. BORING! The acting is also quite atrocious, although it provides many unintentionally funny moments. Nobody responds to…anything. The main girl especially has this dazed look about her throughout the whole picture. She sees an attacking bed and doesn’t appear surprised. She sees her brothers hand melted to the bone and she has even less of a reaction. The brothers “aw shucks. My hands are skeletal” look when the bed melts the skin off of his hands is side splitting though. Either the actors have no talent whatsoever, or they did not share in the directors vision.

So is “Death Bed” a crap movie? Sure. Sometimes the bad parts are fairly appealing- especially when it came to the…well, I don’t want to call them ‘actors’- and at times the film is legitimately impressive. Considering the filmmakers had no money to work with, I generally dug the visuals, even if they are heavy handed. Furthermore, there are a few moments which indicate that the director has a sense of humor. But the comedic moments only made me chuckle once or twice, while the “artistic” moments bad me rolling around on the ground in laughter. Sadly, this only could carry the movie so far and what began as amusing, started to get old. It runs out of steam around the halfway mark and the rest becomes tedious. With that said, “Death Bed” does deserve credit for being memorable. It had a stupidly creative idea with a stupidly creative execution. That puts it above “The Gingerdead Man“, which was just kind of dumb and generic despite its silly premise. Sometimes it’s nice to see something different.

Violence: Rated R worthy. I actually thought the death sequences were fairly unnerving because the thought of digesting in stomach acid freaks me out. It’s not that graphic, but it didn’t need to be.

Nudity: A fair amount and at one point, I even thought the bed was going to rape a girl because it strips off her clothing. It doesn’t, but that sure was weird even within the context of this movie.

Overall: If you like grindhouse or arthouse films, I dare you to watch “Death Bed: The Bed that Eats“. You probably won’t care for it, but everyone should watch it at least once. I hated half of this movie, but I certainly don’t regret giving it a look.