The following two reviews are cleaned up, re-posts of older reviews, although I updated my opinions because I have since played the original video game. 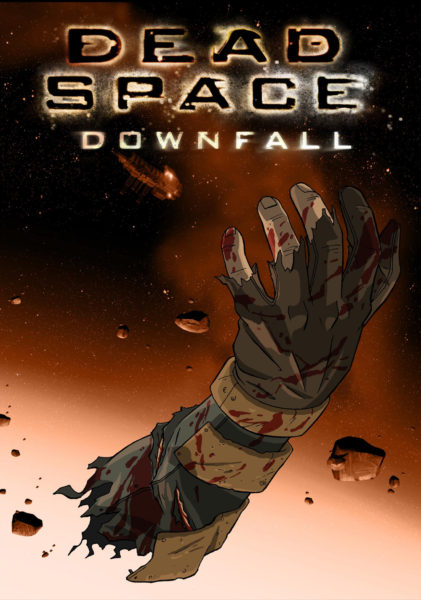 “Dead Space: Downfall” has to be one of the most unusual movies that I’ve ever experienced…even though there is not a trace of originality within it. The story serves as a prequel to the popular video game of the same name, surrounding the doomed fate of the USG Ishimura, a deep space vessel tasked with bringing an alien artifact to earth…Unfortunately, their discovery not only drives everyone it comes into contact with insane, it also harbors a much deadlier secret…Zombie, alien, monster things! “Dead Space: Downfall” borrows from just about every space-themed horror flick ever made, from “Aliens” to “Planet of the Vampires“. I even recognized traces of “Galaxy of Terror“, “Creature” and “Ghosts of Mars“! Yet this is balanced out with a strange, unique mythology that’s so underdeveloped that one almost wonders why they included it in the first place. When I first reviewed this years ago, I criticized the movie for such inclusions, as well as the unresolved subplots and ambiguous fates of prominent characters, but I’m going to retract these complaints, as I hadn’t played the video game at that time. Everything makes a lot more sense if you’re familiar with the source material, although this admittedly alienates potential viewers who aren’t interested in gaming. But this doesn’t excuse the shitty character writing and the even WORSE dialogue. The entirety of this cast is so thinly written and so devoid of personality that their only distinctive traits are their appearances. They’re all also thoroughly unlikable, with nearly every exchange being aggressively unpleasant, as if these are the most unprofessional, miserable human beings in the entire universe. The security team goes to investigate a bloodbath caused by something they suspect is inhuman and we get this exchange-

““There’s a lot of blood in this room, but no bodies.”

As bad as this is, it’s not as bad as knowing that this isn’t the only example of the shitty dialogue, as they continue this ‘repertoire’ even after they’ve confirmed that their ship is under siege by alien entities. Even the supposedly heroic ones are consistently rude, so it becomes difficult to root for their survival, even though their deaths are often presented as tragic or heroic. Furthermore, most of the dialogue feels like it’s explaining stuff. Everything is some form of exposition. The voice actors are all competent, with some even being masters of their craft, but even the best of them struggle with the material they’re given. So “Dead Space: Downfall” is not very good…BECAUSE IT’S TOO BUSY BEING F@CKING AWESOME! The gimmick is that it’s animated, but overflowing with graphic violence. This is common with anime, but “Dead Space: Downfall” is from the west and is styled much more like our cartoons. There is a mix of cel animation and CGI and it’s…acceptable. The filmmakers were obviously working on a budget, but I always felt like they knew when to cut corners, keeping the visuals simple, etc. and when to focus on the details of the image or overdosing the audience on eye candy. I’m not used to seeing gore in this medium and “Dead Space: Downfall” wastes little time to get to the mayhem. Every flaw was buried underneath heaps of blood and guts, because every time the script would annoy me, I would suddenly get distracted by someone getting viciously mauled. The creatures are freaky looking and the kills are so mean spirited that I’d even feel the bite of suspense, just because I was afraid of what f@cked up way someone was going to die next. For all of its many faults, I had enjoyed this when I reviewed it initially and in many ways I had even more fun this time around, now that I’ve played the game it’s based on. If I have any new complaints, it’s that Nicole (you know the one…if you’re familiar with the source material…) has a cameo and it’s such on-the-nose fanservice that I gagged…but then I got more blood splattering and I promptly forgave the movie. The thing with “Dead Space: Downfall” is that it wasn’t designed to be a legitimate movie. It was just part of the promotional materials for the video game, but I love the ambitions that went into it. Even though it was part of the marketing, the animators and filmmakers put together something that was much better than it needed to be. I was intrigued by its style, spectacle and lore enough that I even went out to buy the video game and I loved it, so “Dead Space: Downfall” is minimally an ingenious marketing strategy.

“Dead Space: Aftermath“, on the other hand…is not… 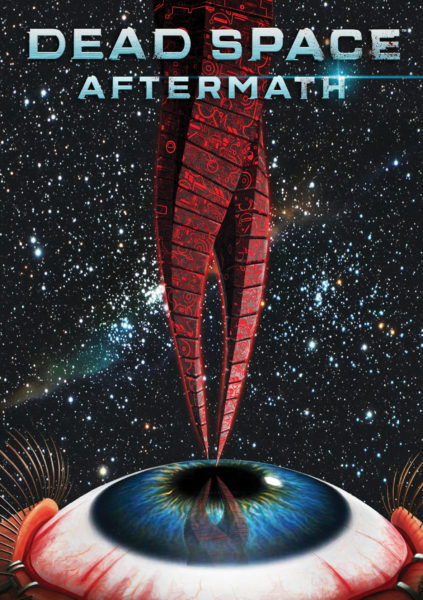 “Dead Space: Aftermath” is awesome if you like movies where the monsters don’t arrive until the finale, the characters constantly treat each-other poorly and follow up scenes where they mourn dead loved ones with  comical one-liners, where the animations are awful and inconsistent and the script is full of rambling philosophy and information that never really seems relevant outside of the video game it’s based off. Just as “Dead Space: Downfall” was meant to serve as a set-up for the first game, “Aftermath” is designed to set-up its sequel. If “Downfall” was a bad movie, at least it was armed with a significant amount of entertainment value as the flaws would be upstaged by alien-zombie-monsters tearing people apart or getting sliced in half by laser chainsaws…LASER CHAINSAWS! “Dead Space: Aftermath” has all of the same problems, but is armed with epic scenes of people…TALKING…SO. F@CKING. EPIC! For what it’s worth, I do have more respect for this sequel now than I did when I first watched it, as the filmmakers had some interesting ideas. The story surrounds the doomed crew of the USG O’Bannon, who have been tasked with investigating the events of the first film/game. The lone four survivors relate their tales about how their ship was taken over by madness and alien-zombie monsters. “Aftermath” borrows from “Rashomon“, with each flashback being slightly different from the others. This is reflected through the animation styles, as the ‘objective’ perspective is CGI and the recollections were animated by different studios. One resembles anime, another one looks more westernized and one even has the aesthetics of flash animation. This was an intriguing gimmick that I initially rejected, as it confused me more than anything else. Some characters’ appearances will change so drastically from flashback to flashback that I didn’t immediately realize they were the same person! . The artistry in the flashbacks never rises above being OK and the CGI segment just…sucks. I was embarrassed by how bad it looked. The character models are bland and the backgrounds are…wait, were there even backgrounds? They’re so sterile and boring that I never even noticed.

And ‘boring’ pretty much describes “Aftermath” in a nutshell, as the “Rashomon” narrative device might have been an inspired idea, but doesn’t fit in a “Dead Space” scenario. I’ll admit that the characters have A LOT more depth than the cast from “Downfall“, but they’re still all a bunch of assholes. They spend the entirety of the story yelling, cursing, threatening and being cruel to each-other, so their interactions are very difficult to endure. When the dialogue isn’t dripping with venom, it’s trite, dull exposition with a lot of jargon that I couldn’t even decipher. The tone is even more manic than its predecessor, which at least had the decency to phase out the bad comedic one-liners around the half way point. These characters are constantly throwing out quips that completely ruin the mood…and now multiply all of this by FOUR, as each flash-back seems to cover the same territory as the last one, so we get to watch these same frustrating confrontations and boring expository dumps OVER…AND OVER…AND OVER…AND OVER AGAIN! “Aftermath” slowly builds up to the grand finale, where the alien-zombie-monsters FINALLY show up and start wrecking havoc. Remember how “Downfall” got to the monster mayhem almost immediately? “Aftermath” makes you wait until the 3rd act, even though these are the same creatures we got from the first film. Very little seems to happen up until that point, so it’s hard to be invested in any way. Once the action starts, I was marginally entertained, but the alien-zombie-monsters don’t seem quite as threatening (apparently two guys can fight off a swarm of them) and the animation quality is still subpar. Like I said before, I appreciate the effort. They do try to develop the characters, but they only start becoming a little likable AFTER THEY’VE DIED. The thematic material is shallow because they use lines like “Homo-sapiens are the real monsters” to make their point and that’s just lazy. “Aftermath” was an interesting idea that unfortunately translated into a bad movie and an even worse marketing strategy. If I hadn’t played “Dead Space 2” when I saw this, I would almost assume that it’s less about fighting alien-zombie-monsters and more about bickering with the other characters…We already f@cking have that with every other game and it’s called “multi-player“, but I wouldn’t make any video game purchases based on my experience with this film. Still…I have some respect towards “Aftermath” for trying something different and even if I think it’s ‘bad’, I understand its ambitions a lot more clearly now. I wouldn’t mind a third animated entry…