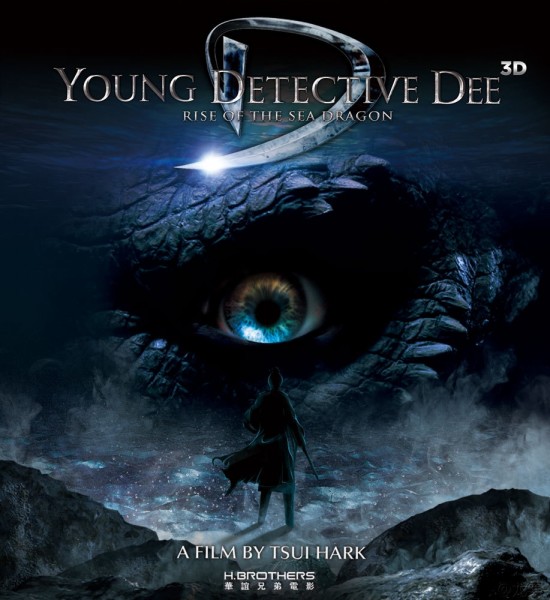 Plot: Dee (Mark Chao) is a brilliant martial artist who aspires to become a detective, but finds himself clashing with Chief Detective Yuchi (Shaofeng Feng) when a case involving Sea Dragons takes the country by storm. This is a prequel to “Detective Dee- Mystery of the Phantom Flame“.  Also known as “Di Renjie: Shen du long wang” and “Detective Dee and the Rise of the Sea Dragon“.

“Detective Dee and the Mystery of the Phantom Flame” was a one of a kind experience, cramming wuxia styled kung fu, a murder mystery, political intrigue, comedy, horror and fantasy into a single package seemingly designed to make me smile. It satisfied this jaded viewer on almost every level, even though it was directed by Hark Tsui, who went from innovative to obsolete over the years. The stories of Detective Dee seemed like perfect franchise material and since the movie was a big critical and financial hit, why wouldn’t they continue the tale? “Young Detective Dee: Rise of the Sea Dragon” chose to go the prequel route, chronicling the rise of the titular detective and how he would meet certain characters who would appear in the predecessor/follow up. This decision confused me as prequels with different casts usually aren’t as successful, probably losing more money in box office draw than what they’d be saving by not hiring the likes of Andy Lau (“Infernal Affairs 2“…does anyone remember it?). Yet audiences defied this rule and flocked to the theaters with high expectations. Sure, Hark Tsui followed his successful introduction to Dee with the highly underwhelming “Flying Swords of Dragon Gate“, so it wasn’t like his presence automatically translates into magic or anything…Sure, the premise seemed to contradict a major point of the first film, changing the setting into a conventional fantasy setting. But these concerns weren’t going to stop us real fans and my viewing was a…bittersweet experience. “Detective Dee and the Mystery of the Phantom Flame” is still a one of a kind experience, as the prequel embraces one genre (instead of many) and the narrative is a mess. “Young Detective Dee: Rise of the Sea Dragon” provided quality entertainment, seducing its audience with a never-ending stream of special effects, kung fu and suspense. But wave goodbye to anything resembling substance, because this prequel only offers eye candy…and my eyes have a sweet tooth…So…bye substance?

Like the movie or not, there is no denying that “Young Detective Dee” recaptures the hyper-kinetic visual style of “Detective Dee- Mystery of the Phantom Flame“. Once again, there is not a single mundane shot. The camera angles were unconventional and the editing what chaotic- but in a good way. I noticed a lot of the visuals overlapped, reminding me a lot of “Sin City“. I often felt like I was watching stills from a comic book being directly translated onto my television, which always looked really cool. The sets are larger-than-life, even though the wide shots are obviously digital backgrounds, but they still create a sense of awe. The lighting is colorful and the special effects are shockingly good…at times. There is some unconvincing CGI, but ironically “Young Detective Dee” excelled when it came to the giant sea monster, which I was sure would be the weak link. The computer generated effects usually only faltered when characters would do something inhuman, but that sea dragon had a terrifying design and always looked real. Admittedly the blatant ripping off of “Pirates of the Caribbean: Dead Mans Chest” during the finale undermined this success, but it was still an epic finale regardless. “Young Detective Dee” is definitely NOT a bland looking movie. Why can’t Hark Tsui bring this level of energy to his other projects? I’d be willing to forgive the lackluster CGI in “Flying Swords of Dragon Gate” if it had even 50% of the wild visual ideas which can be found here.

Because Andy Lau wasn’t reprising the role, I was hoping that the kung fu would be more grounded in traditional choreography than wire works or post production tricks. While “Young Detective Dee” did not indulge me, at least the Wire Fu and CG Fu were done really well. Yes, there are plenty of corny moments where it’s hard not to roll your eyes at the utter raping of physics. But I thought the absurdness was rather charming. The action was exciting and I always felt that something important was on the line- boosting the suspense. There are a lot of gimmicks surrounding the battles, whether the focus is on the weapons or the locations. This allowed the combat to never become stale, which is good considering I suspect that 70% of the runningtime is dedicated to said action. “Young Detective Dee” has a lightning fast pace, not bothering with trifles like fleshing out or developing the characters and their relationships. Nope, instead of talking about their feelings, they have to hurry to the next fight scene where we will feast upon epic imagery instead of dramatic substance. Even the superior “Detective Dee- Mystery of the Phantom Flame” occasionally ran out of steam, but while “Young Detective Dee” sometimes moved so swiftly that it was hard to keep up with the plot, it never exhausted me. I was having fun all the way through.

Nevertheless, I have to concede that “Young Detective Dee” is much more shallow than its predecessor. The characters are significantly blander and showcase little personality beyond their archetypes. Dee is smart and benevolent, Yuchi is intense and dutiful, Ruiji (Angelababy) is hot and romantic and they are probably the most “complex” of this cast. The acting isn’t bad, but the previous film provided more room for the actors to have fun with their roles. The plot is really convoluted and silly. There is way too much going on and the subtitles are white amongst light backdrops so it was often hard to follow. The story exists only to provide spectacle, even if it isn’t always explained how the “spectacle” is even there. Why did the bad guys need a sea monster when their plan already would’ve been enough to take out the Imperials? The answer is this movie really wanted a sea monster, but probably couldn’t afford to show it a lot so the majority of the running time had to focus on the human conflict. If you enjoyed “Detective Dee” for its mystery, prepare to be disappointed as there are no real twists. When pieces of the plot unfold, it’s usually solving a question that came up earlier in the scene. I liked how in the first one, there were scientific explanations for the fantasy elements, but that angle was completely dropped here. Sea monsters apparently exist and tea can mutate you into a super strong monster. I was annoyed that “Young Detective Dee” didn’t try to balance multiple genres, which was part of the reason I adored its predecessor. There isn’t any horror, the comedy is toned down, the intrigue is only implied and the mystery should be grateful if I even call it pedestrian. This is 100% an action movie…But I guess that’s not a bad thing as long as the action is good…which it is. If you adored “Detective Dee: Mystery of the Phantom Flame” for its visual style and action sequences, then you’ll like this sequel. I really enjoyed it, but I don’t think I’ll remember it. The quirkiness of its predecessor, which helped it stand out, is largely absent and the final result is that this prequel is…just kinda ordinary. It made for a fun 2+ hours though and I guess that is what really matters. Will I watch it again though? Maybe, but not in the immediate future.

Nudity: There is a sex scene that’s very reminiscent of a Frank Miller comic.

Overall: “Dragon Dee: Rise of the Sea Dragon” isn’t as good as the first one, but it’s still pretty good.