Plot: Vegeta is approached by a mysterious Saiyan named Paragus, who requests that our beloved Saiyan Prince travel with him to another section of the Universe so he can stop the rampaging of ‘the legendary super saiyan’. Vegeta brings the gang with him, but Goku learns through his own investigation that this foe might be too much for any- and all- of them.

Depending on who you ask, “Dragonball Z: Broly The Legendary Super Saiyan” is either amazing or amazingly overrated. I remember as a kid, long before the series would even move past “The Tree of Might”, finding a toy of Broly that I cherished. Much like Trunks, Broly was an awesome enigma and we nerds who lacked access to the internet would speculate about the character. We would claim to have found information, which was always a total lie, and we’d spread our bullshit throughout every circle we were involved in. Even though everyone had a different Broly story, that never stopped us from eagerly listening to the tall tales. Usually, the big claim would be that Broly was the Super Saiyan mentioned by Vegeta during the Frieza arc and that he would be the strongest character in the entire franchise. Of course, it would make no sense for Broly to be the original super saiyan since that was ages ago…and once we finally saw the movie, we would realize that Broly probably wasn’t more powerful than Cell- who wasn’t even the strongest himself…But hey, we also thought Trunks would be cool back then…and we thought “Dragonball GT” would be awesome…so we were often wrong. Yet nostalgic musings aside, I really do love this film. “Dragonball Z: Broly- The Legendary Super Saiyan” feels like a legitimate movie, fleshing out its story and characters enough to make the mindless action not seem so mindless. It’s dramatic, atmospheric and stands out amongst the crowd. Yet you should also remember that even if this is the best DBZ serial film, that also raises the possibility that it can become the most over-hyped. A LOT of viewers were not happy with this and I suspect their expectations were at fault.

Ironically, the best Dragonball Z movie (as of film #8) is also plagued with the most unusual weakness of the franchise. The fight scenes…aren’t very good, although maybe that’s not the right word. They’re definitely more sluggish than the norm, with a large chunk of the action being dedicated to slow motion- or merely slow movements. Yet at least they’re all drawn nicely and the usual DBZ corner cutting tactics aren’t used. So if you want the fast paced fighting from “Super Android 13” or even “The World’s Strongest Man”, you might be disappointed because all we get here is Broly curb-stomping his victims. I would usually criticize this, but I will say the battles have a very different feel this time around. The backgrounds seem to be moving faster than the characters, which usually is a sign of laziness, but it created an unusual effect here that I found to be interesting. The locations play a big role in the action, which kept the fights from becoming stale. But It seems like the primary focus is on Broly’s overwhelming presence. These fights aren’t really fights. They’re Broly brutalizing his victims and make no mistake, I mean BRUTAL. Every angle emphasizes his size, overflowing power and his apparent omnipresence. The characters almost immediately realize how screwed they are, because even banded together, Broly doesn’t seem to be even trying. The characters stand no chance and their fear rubs off on the audience- which creates an emotional connection.. If the fighting was sped up and more dynamic, “Broly- The Legendary Super Saiyan” may have lost its dramatic kick to the nuts.

The animation quality is top notch, although the color palette might turn a lot of viewers off. “Broly- The Legendary Super Saiyan” has a bleak atmosphere  and the locations represent that. Everything is greyish and Broly’s green aura is very unusual. Yet I thought the colors fit the mood and I was just grateful that a lot of attention was put into creating this detailed, desolated world. The direction was highly inspired, boasting a lot of experimental framing that made me feel like I was in the action with the characters. The visuals were really creative in general, tying in to my previous praises for the use of locations and how they are framed, but the symbolism really resonated with me. My favorite moment is when breaking glass is used to represent the damage Goku had taken. That really made the strike feel much more devastating. I would recommend the Japanese version because of the original score, which is just a perfect fit. As always, it’s usually foreboding, inspiring or sad, but it meshes with the (already awesome) visuals. The hard rock soundtrack just didn’t feel right to me. It was kind of cool in “Cooler’s Revenge”, but I wish funimation went with the original music.

“Dragonball Z: Broly- The Legendary Super Saiyan” is BRILLIANTLY paced. I don’t even need to explain that it doesn’t take long to get going, because every DBZ serial flick has only taken a few minutes to deliver the set-up before moving on to the action. But what is surprising is that this movie shows patience by not immediately jumping into combat mode. They could’ve gone “The Return of Cooler” route by having everyone fight as soon as they arrive on the designated planet, but that doesn’t happen. Instead, it focuses on the story and how the characters are involved with this story. Eventually, the plot starts to boil over and the action finally takes the center stage. In other words, it builds up to the fighting instead of rushing to it. But there’s still drama, comedy and intrigue to be found. This is how a DBZ movie shall be written. Granted, the ending was a little weak, but it makes sense when you think about it. While the ‘everyone gives Goku their energy’ bullshit is still bad writing, I thought it was obvious that Broly was defeated by his own power. He suffered the same fate as the original Super Saiyan. Am I the only one who thought that was obvious? Yet everyone seems to think that Goku’s punch was that powerful. 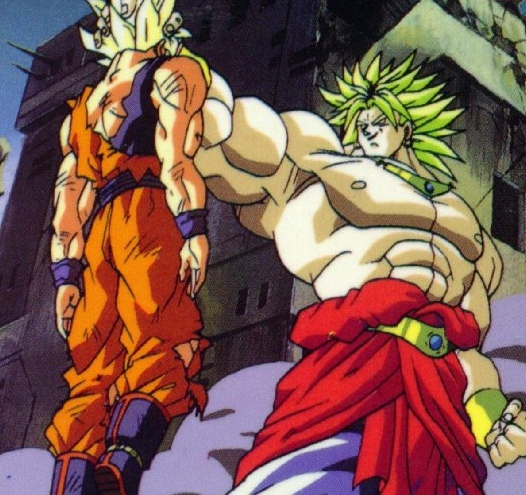 Speaking of whom, I like Broly. Broly and Paragus are unique because they are tragic characters, but this doesn’t make them sympathetic. In fact, their sad backstories only assist in making them total monsters. Broly might be a twisted bastard, but you also wonder if he has any real choice in the matter. He seems to be being consumed by his own increasing power. His personality is standardly villainous, but he makes up for that with sheer presence. Super Android 13, whose presence also impressed me, seems to be mere foreshadowing for Broly. Unfortunately, the sequels would make him increasingly more boring. Paragus is entertainingly hammy, but I thought he was also interesting and he complimented Broly nicely. Before anyone pisses their pants in anger, I will reinforce that I agree Broly is highly overrated in terms of his power. I think he’s probably on par with bulked up Vegeta from the Cell saga and he probably reached Cell’s level for the second movie, but he’s nowhere near to being the strongest in the Dragonball universe. Still, at this stage of the game, that’s still the strongest enemy they’ve faced BY FAR. As for the heroes, Vegeta has the best character arc, although I felt his big entry into the battle was cut short too quickly. I found it interesting that he seemed to like Broly, while showing disdain towards Paragus. Many have complained that his quivering reaction to Broly’s power was out of character, but he acted the same way when he realized how hopeless it was fighting Frieza.  Gohan, Trunks and Picollo are present, but they don’t do much outside of fighting (their investigation is mostly off-screen). Goku is interesting because he seems to realize he can’t win, but also can’t give up, and his goofy laugh amidst all this destruction is oddly haunting. Krillin, Master Roshi and Oolong are the comedic relief and…God, Master Roshi is really annoying. The drunk running gag got old before it even started, although I am glad Krillin isn’t treated like a joke this time around (even if he doesn’t do much).

“Boly: The Legendary Super Saiyan” benefited from solid writing, direction, animation quality and far cooler villains who can bring out very unusual reactions from our heroes. Sure, the fights themselves aren’t that great, but it’s the intensity which backs the fight scenes that makes the movie entertaining. “Broly: The Legendary Super Saiyan” doesn’t feel like a two episode short, it resembles a real movie. It was the first DBZ serial to reach its full potential and it also broke the ‘good movie, bad movie, good, bad, etc’ pattern that proceeded it. Now please keep in mind that of all the DBZ flicks, this one has had the most backlash simply because of its positive reputation. I know that some of you might watch this and feel it’s overrated, but it’s my personal favorite of the DBZ films…so far…

Violence: It’s pretty violent, actually. Broly getting stabbed with a dagger as an infant is especially cringe inducing.

Overall: “Dragonball Z: The Legendary Super Saiyan” was an awesome experience, although me saying that might just set you up for disappointment.