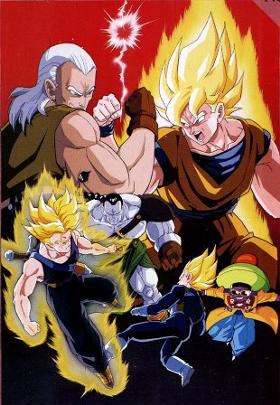 Plot: Goku and his friends are attacked by three androids who were activated following the death of Doctor Gero.

It is common knowledge that in regards to these serial films, the continuity of the Dragonball Z timeline is all sorts of f@cked up. It’s easy to just dismiss them all as non-canon, but that’s not true as Garlic Jr acquired his own filler arc and Cooler has a cameo appearance in “Dragonball GT“. This is where hardcore manga fanboys will argue that all of the TV show filler (including, or maybe ESPECIALLY, GT) should also be discarded, although I’ve always felt it comes down to what you prefer following. I didn’t grow up with the manga. I grew up with the anime, so that is MY canon. When it came to these movies though, it’s impossible to pinpoint when they’re supposed to take place. The only time the events of “The World’s Strongest Man“, for example, could occur was when the gang was traveling to Namek…which they obviously weren’t doing for that film. This has caused fans to speculate that these are alternate timelines, which is a theory that might be supported by canon (watch the Cell saga). Yet “Dragonball Z: Super Android 13!” is the only serial film that doesn’t just ignore the established continuity…It urinates acid onto it, creating holes that will mind rape us fans. That sounds pretty bad, right? Oddly, no. This film is just unpretentious fun, showcasing nothing but Goku, Trunks and Vegeta participating in thoroughly enjoyable battles.

The film opens with Android 17 killing Doctor Gero, which occurred during the TV show, but it’s different because the protagonists appear to be absent. As Goku doesn’t seem to be aware that Gero is dead, either no one told him or the continuity was just officially re-written. The big hole is…what happened to Android 17 and 18? The Cell saga couldn’t have happened because no one has the ascended Super Saiyan ability. I suppose the presumption is they were killed by the heroes this around around, which actually created a serious potential problem for “Super Android 13!“. I liked how we’re never supposed to accept these new androids as being stronger than 17 or 18, as it doesn’t create the hype paradox Cooler fell victim too. But if our heroes conquered more dangerous opponents prior, why should we feel any tension? In fact, 13-15 only are threatening because the heroes are HOLDING BACK! I had this same problem with “The Return of Cooler” as well, but why aren’t Goku, Vegeta or Trunks using Super Saiyan? They have drawn out battles in their base form, but they obviously know how to transform, so it doesn’t make sense that they would be taking beatings for shits and giggles. Maybe they’re just bored and see these androids as a means for temporary excitement? I suspect that the writer/director wanted to utilize Super Saiyan as more of a strategy and not just something they’d transform into from the beginning, but that contradicts the show, so…Oh well! My overall point is that the overwriting of continuity arguably works against the film, as it undermines its own villains. Also, it’s the only time where the original continuity is acknowledged while also being ignored…strange. 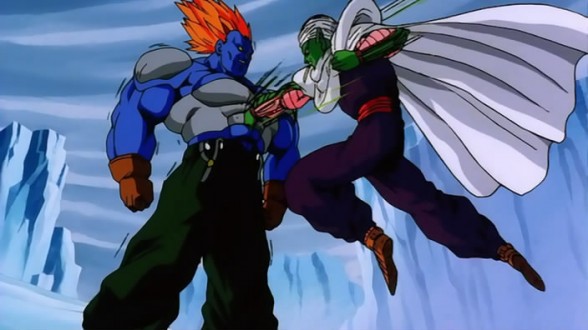 There is no plot. Yes, somehow there is even less of a story than “Cooler’s Revenge“, but as terrifying as that sounds, I’m actually grateful. I would rather these serial films discard any pretense of a story than waste what could’ve been an awesome one like “The Return of Cooler“. While the dubbing is…okay, albeit kind of offensive, the dialogue is insanely corny. Sometimes I liked the hefty dose of cheese, but other times I did groan. Dr. Gero’s over-the-top voice made me laugh hard. I suppose this could be a good point to talk about the characters. These new villains are pretty weak- in terms of characterization, not power- and all you will think of is how they represent a racist stereotype. Android 13 is a redneck, Android 14 is a Native American warrior and Android 15 is a Pimp…who is purple, but might as well be Black…or Mexican. Somehow Android 15 seems like a racist caricature of blacks, Mexicans and purple people all rolled up in one. I couldn’t take their designs seriously, but at least the Japanese version stops with their appearance. If you watch the original Japanese dubbing, they’re just incredibly serious and are devoid of any kind of personality. In the funimation dub, they completely fill their stereotypes with the way they talk- although Android 14 never gets the chance to be completely racist. But offensive or not, they’re really boring…Until Super Android 13 arrives. Holy shit, now this is what a villain should look like! He’s imposing and just has a cool appearance. He also provides a MUCH greater threat and it actually makes sense. It can be argued that Super Android 13 was a stepping stone for what would become Gero’s greatest creation, Cell, as both have similar (but not identical) ways of acquiring power. When Gero realized he could go farther than Super Android 13, he discarded the project. Super Android 13 is not a well written character, but he has the right presence. As for our heroes, Goku is just typical Goku. Vegeta gets an AWESOME entrance and reclaims the dignity lost in the previous film. He gets to be awesome and I enjoyed watching him. Future Trunks makes his big debut and honestly…I’ve never liked the character. I remember thinking he was going to be amazing before his first official appearance in America, but he ended up boring me and after defeating Frieza he sort of became useless. But if you like Trunks, you should like him here. Picollo has a decent role, but Gohan is an afterthought and Krillin is even more annoying than usual. Luckily, I was fine with how the characters were used as the focus was on the Super Saiyans. Actually, the overemphasis on the Saiyans annoys me in everything else, but it didn’t bother me here. Maybe it’s because the focus is on high octane action? Also, there’s the novelty of three Super Saiyans working together.

There is no real dramatic atmosphere or any sign that this is a true movie, feeling more like a 2 episode filler…but once again, I didn’t feel it wasted a good story or character, so I was fine with the lack of ambition. Luckily, this doesn’t mean “Super Android 13!” is lazy. In fact, it boasts some of the best animation quality of all the DBZ serial serials. Everything always seems to be moving and I liked the various locations. The first battle takes place in a city and the animators do a fine job drawing all that destruction. The rest of the action inhabits an arctic setting and while that usually would be kind of boring, there are enough scenarios that properly utilize the location. I especially loved seeing the ice melt at the end…gorgeous. All in all, the animations are fluid and the fight scenes were wonderfully paced. I felt there was a greater emphasis on techniques and strategy, which made the battles more interesting. There are a lot of moves you don’t see too often, like a brutal groin attack. “Super Android 13!” doesn’t provide the best action scenes of the serial films, but I thought the fights were good and I’m glad that Goku didn’t completely hog the show. The ending was a little cheap, but at least there was proper build up to the finisher compared to its predecessors. Plus, I love the spirit bomb music, although I primarily refer to the Japanese version.

I’ve been thinking about these Dragonball Z films and I’ve noticed that the problem with them is that when the filmmakers have inspired ideas- be it story or character- they feel underutilized in these short films. They deserve something bigger and more grand, like a full saga or a full 90 minute movie. Yet at the same time, these also end up being the best of the DBZ movies simply because they have more inspired ideas. When the filmmakers lack that inspiration, they won’t bother to even try and will just throw together an underwhelming feature designed to kill time. “Cooler’s Revenge” is an example of the former, while “Lord Slug” is an example of the latter. “Super Android 13!” found a solid middle ground. There aren’t any real interesting or compelling ideas driving it. It’s just Goku and his friends fighting a standard villain, who is reminiscent of past villains. Yet the filmmakers put tons of effort into making this ‘meh’ sounding project something special, giving us higher caliber action scenes and animation quality. So I just looked at it as a minor filler story that was simply better than most minor filler stories. I had fun, even if “Super Android 13!” doesn’t especially push boundaries or stand out. I’d say this is the 4th best DBZ serial film SO FAR.

Violence: It has some pretty nasty violence.

Overall: “Dragonball Z: Super Android 13!” was unexceptional, but it was also entertaining, so I had a good viewing experience.