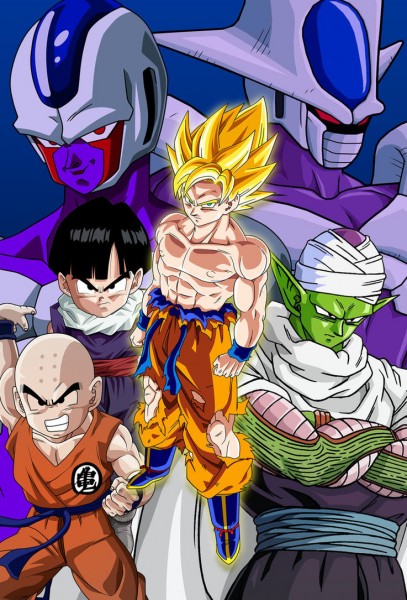 Plot: Cooler, a space tyrant, learns of the great battle of Namek- where his brother Frieza was slain by Goku- and decides to avenge him. Can Earth withstand his power?

I remember being underwhelmed by “Dragonball Z: Cooler’s Revenge” when I saw the feature during its first American release. At the time, I thought the problem was Cooler himself…no, that’s not right…I thought the problem was how Cooler was used. The battle between Goku and Frieza was so massive in scale that the planet could not withstand the two powerhouses and the length of their struggle has become infamous. Despite being set up as Frieza’s stronger older sibling, Cooler doesn’t seem anywhere near as dangerous. I never felt the planet was in any kind of danger and consider this, it’s strongly implied that Trunks killed Frieza so quickly (before he could max out) because he knew that Earth would not be able to withstand an encore of the battle of Namek. Cooler, in the same form as Frieza, seems to be comparable to base Goku in terms of power (even though base Goku stood no chance against Frieza)  and…well, I won’t spoil the ending. But let’s say that Level 5 Cooler Vs Super Saiyan Goku is oddly anti-climactic compared to Level 4 Frieza vs Super Saiyan Goku. Cooler seemed to be all talk compared to his brother, which I doubt was the intention. I kept thinking “Show! Don’t tell!”. The flaw within the basic concept of “Cooler’s Revenge” is that even if Cooler was superior to Frieza (which I don’t buy, at least while Frieza was alive), he only has 50 minutes to harass our heroes. Frieza had…how many episodes dedicated to his reign of terror? It’s a fair excuse for the movie to have, but my emotions always outweigh my intellect when it comes to cinema, and my emotions told me to be disappointed. Plus, this was a dilemma the filmmakers should’ve thought of before entering production. Yet “Cooler’s Revenge” works better upon second viewing because it isn’t accompanied by the deadweight hype. On its own merits, it’s briskly paced and excelled in the action department, so I was thoroughly entertained.

“Dragonball Z: Cooler’s Revenge” probably boasts the best production values, at least compared to the previous four DBZ serial films. The animation flows nicely and I never felt like I was watching screen grabs of an actual animated flick (*cough, “Lord Slug“, *cough*). The director loves his orange coloring, especially in the backgrounds and even though I thought they were more effectively used for the surreal imagery of “Dead Zone“, they do add a light sense of mood to the proceedings. There are some slick visuals in general, even though “Cooler’s Revenge” isn’t trying to be as atmospheric as “The Tree of Might” or “Dead Zone“. In fact, the locations are standard- maybe even a little lazy (it’s just a forest)- but they put more effort into making the mundane battlegrounds stand out. I’m just glad that the backgrounds weren’t all black or obscured in shadows (*cough, “The World’s Strongest Man“, *cough*). “Cooler’s Revenge” primarily wants to show off its fight scenes and holy hell, this is some of the BEST anime choreography to appear within the Dragonball universe. The battles aren’t all one-sided (“Tree of Might“) and they don’t feel like recycled versions of past battles (“Lord Slug“). Characters show off some new and interesting techniques, while established techniques are used in new and interesting ways. There are a lot of “holy shit that is awesome!” moments, such as when Cooler flies through a super charged Kamehameha. I never felt the animators were cutting corners, even when they could’ve easily justified it. When characters are moving incredibly fast and exchanging blows so quickly that the human eye struggles to keep up, it always looked like the movements were fully drawn. The funimation version contains a hard rock soundtrack, so expect to hear many familiar western tunes. Sometimes it works, like when Gohan sneaks away to collect sensu beans (didn’t recognize the song, but it fit) and I LOVE how “Change” by Deftones plays during the big Super Saiyan transformation sequence. That song meshed with the visuals perfectly. But for the rest of the running time, I thought the music was distracting and it often drowned out the dialogue. Nevertheless, I usually paid more attention to the wonderfully crafted fighting. 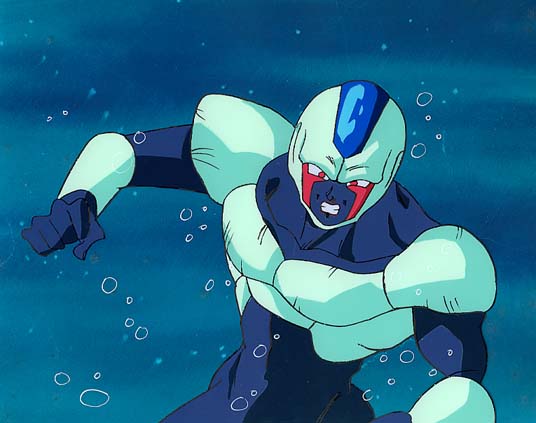 Now even though I say “Cooler’s Revenge” is the best in certain areas, I still prefer “Tree of Might” and “Dead Zone“. The plot is still weak, even by Dragonball standards and there are some oversights. Cooler and his crew are often credited as being able to mask their power levels, but this doesn’t make sense as it’s implied in canon that such an ability is rare- but more importantly, Salza presumes that his scouter must be broken for it to not pick up the protagonists power levels. He doesn’t seem to realize that this skill even exists. So as a DBZ nerd, I noticed that and think the writers just forgot about that. I know this sounds like a nitpick, but it seems like the villains are constantly sneaking up on the heroes, who should’ve sensed them coming a mile away. Also, the problems I had with Cooler himself still effected my viewing, they just didn’t consume the entire experience. I think there could’ve been more suspense. The Earth never felt like it was truly in peril, which is why I prefer “The Tree of Might“. That movie excelled because it drew a variety of emotions from me: Dread, sadness, excitement and hope- which is what real movies are supposed to do. “Cooler’s Revenge” can’t make the same claim, but its ambitions are focused entirely on getting the target audience to enjoy the spectacle and nothing more. It’s not a real movie as much as it’s just “50 minutes of DBZ with better animations“. For some viewers, that will be enough, while others will be left wanting more. For me, I’d say…both? I wanted more, but I also enjoyed what I got. While I’m lingering on the flaws and missed opportunities, I will say there are some REALLY cheesy moments, usually surrounding the various animals who get caught up in this clash. But I guess I need to elaborate on the character of Cooler…

Props to the writers for not just repackaging Frieza when it came to fleshing out Cooler. Even though they look alike, their body colors are different and Cooler has a more masculine appearance (whereas Frieza was androgynous). Even though they both have sadistic personalities, Cooler is more pragmatic, serious and treats his henchman well. I think Frieza has a more entertaining personality, but the important thing is Cooler has HIS OWN personality. So even though I don’t care for how the character is used, I do like the character- even if I think Frieza was still the stronger one (and funimation seems to agree with me). I also liked Cooler’s henchmen, as they also had diverse characterizations and gimmicks. I did notice though that these movies have gotten in the habit of recycling designs from canon henchman. The goons from “Lord Slug” resembled Zarbon and Dodoria, while these guys are modeled after various members of the Ginyu Force. Just saying. Luckily, they were good villains who were fun to watch. As for our heroes, Goku has recaptured my interest as he gets to be funny once more. I also liked how he seems genuinely afraid of Cooler’s power at times. I claimed that “Lord Slug” was the last time Picollo was able to be relevant before becoming the DBZ equivalent of a jobber…I was wrong. Picollo is awesome here…and Krillin…holy shit, even Krillin gets to be badass again. Seriously, it took FIVE FREAKING MOVIES to make Krillin marginally cool, but “Cooler’s Revenge” finally throw that dog a bone. Goku is incapacitated throughout much of the story, only being prevalent during the 1st and 3rd acts, so Gohan dominates a lot of the screen-time. He has a very important task, but doesn’t get in much on the action. It should be noted that I consider this to be poor writing. Either make “Cooler’s Revenge” about Goku or Gohan or both, but don’t switch out heroes when it’s convenient. Gohan should’ve either played a bigger role during the finale, or Goku should’ve played a bigger role during the second act. But “Cooler’s Revenge” at least uses its cast and gives everyone something to do, even if it’s just to make us laugh (Chi-Chi). The funimation dubbing was good this time and I generally liked the dialogue.

“Dragonball Z: Cooler’s Revenge” isn’t high quality cinema and probably shouldn’t even be considered a real movie. It’s a two episode special spliced into a 50 minute package. Outside of Cooler himself, it doesn’t offer anything especially memorable. But it is a lot of fun, thanks to a stronger presentation, excellent fight sequences and good animation quality.  “Cooler’s Revenge” also boasts the BEST pacing of the first five movies, not rushing to get itself over with or taking too long to get going. It was the perfect balance of character interactions, action, comedy and drama- even if only the action is exceptional. I still think there could’ve been a better way to use Cooler. Either admit that he’s not as powerful as his brother, or SHOW us how much more dangerous he is, without relying on weak boasts by the…*gasp*…guy who is supposed to be the stronger one. But every DBZ movie (so far) has missed out on a lot of potential. This one simply follows that trend. But that doesn’t mean you can’t sit back and enjoy yourself. I was surprised at how much I liked “Cooler’s Revenge“, especially after my lukewarm first viewing. Strange, as I remember liking “The World’s Strongest Man” during my first viewing of that, but it fell victim to a lukewarm second viewing. I guess it’s just a matter of the films aging- for better or worse. Time is quite the fickle whore, isn’t it? But Cooler isn’t totally finished with me yet, as my next subject is “The Return of Cooler“, which is the first serial film featuring my favorite DBZ character: VEGETA!

Violence: PG-13 worthy. It’s no worse than the others.

Overall: “Dragonball Z: Cooler’s Revenge” was a big step up from its immediate predecessor, so fans…already have checked it out…Why am I writing these reviews again?