Plot: A nefarious mad scientist named Dr. Wheelo desires the body of the world’s strongest man, who happens to be the worlds savior, Goku. So they fight. Also known as “The World’s Strongest“.

“The World’s Strongest Man” was never among my favorite “Dragonball Z” movies, but I don’t remember it being this boring. I guess I will concede that it has parts of sheer awesomeness, which did get my fanboy juices pumping, but that means I was only occasionally entertained. As a whole, i left me somewhat shaken and nervous. Did my appreciation of “Dead Zone” and the TV show stem from nostalgia? If so, that steam has already dissipated and now I have to contend that I have A BUNCH more “Dragonball” flicks I still must pillage. I’m now finding myself praying that “The World’s Strongest Man” was just not very good and that subsequent entries within this franchise will recapture my already dwindling interest. “Dragonball Z: The World’s Strongest” isn’t terrible, as it does boast some memorably cool moments, but the writing, animation and even the voice acting quality seems lazy compared to its predecessor. It’s also chillingly slow, which is quite the impressive accomplishment considering how the film isn’t even an hour long. But hopefully you can do what I did, embrace the parts that work and mentally phase out the parts that don’t.

I praised “Dead Zone” for making an effort not to cut corners when it came to delivering its action sequences, so must condemn “The World’s Strongest Man” for a taking an electric, laser beam machete to those corners. If you look at the backgrounds, you might notice that there are a lot of shadows obscuring the locations, because it gives the animators an easy way out of actually drawing and coloring full freaking backgrounds. The visual style in general is rather uninspired compared to its predecessor, having a rather dull color scheme and never utilizing lighting for building atmosphere. Hell, there are a number of times when there will be nothing but blackness behind the character models. I will say I kind of liked the weird, hypnotic music, although it was more creepy than inspiring. Still, I’m a sucker for strange and that score was very strange. During the fights, characters will suddenly seem to teleport, except the teleportation effect that was popularized in the TV show isn’t used. One moment, a character will be standing a good distance away from their enemy. Then the next frame, they’re in the middle of punching them. At least show an after image or something! This flaw also bleeds into the overall narrative, as I always had difficulty telling how much time was passing. The villains gather the dragonballs…somehow…but they manage to snatch like three within five seconds…HOW IS THAT EVEN POSSIBLE? Was this supposed to take place over a certain period of time? It’s never clear. When Goku defeats an enemy and arrives in the room, he comments on his previous fight. Then the next shot, he’s presumably in the same room but he’s facing a new villain. No build up or anything. He’s just there. Was he watching Goku when he broke through the roof? Or what about when we see a villain follow Goku, but is absent during the next scene? He shows up eventually during that battle, but I presumed Goku confronted those spikes as soon as he entered the base. Shouldn’t the villain be right behind him? “The World’s Strongest” seems like it’s in a hurry to get itself over with and the animators didn’t have time finish their product. But there are so many lingering shots of nothing and BORING exposition dumps. The back-story for Dr. Wheelo was longer than it needed to be and unlike Garlic Jr’s history, there was no interesting animation backing it up. I wish they would’ve cut that crap out and dedicated more of their time and resources to filling in these gaps.

I will say that outside of the crappy editing, the fights themselves are pretty good, even if they don’t make any sense. Granted, they weren’t as detailed as the battles from “Dead Zone“, nor as diverse, but there were more animated movements than what the TV show had. There weren’t too many speed times, so that was nice. This was still when it felt like the characters were using martial arts, so the ki blasts are used sparingly and there is a sense of style to their techniques. I don’t know why, but I always found the finale with the Spirit Bomb to be incredibly badass. The gorgeous shots (drawings, technically) of Earth being covered in Energy, the slow motion and Wheelo’s attempted counter attack was pretty awesome. My favorite scene has to be when Master Roshi gets to fight, even though his importance had died down by the time “Z” was added to the title of “Dragonball“. It doesn’t make a lot of sense, as this suggests he would’ve been one of the strongest during the Saiyan Saga- which he did not participate in because he felt he was too weak- but it was nice to see him get to something again and not be treated like an absolute joke. I don’t know why they keep bringing back Krillin for these films, because he’s humiliated once again and it seems like the movies want to play up his most obnoxious traits. Goku and Picollo are the major players once again, but now they fit their familiar roles- the boring hero and the stoic mentor. Gohan gets an increased part and I liked his angry moments (love how his ki is animated), but his dialogue has to be the most irritating. There’s a lot of redundancy to his lines, so I began to hate him for drilling “Why are you doing this, Mr Picollo” in my head. Many have complained about the infamous ‘song’ bit (which was muted for the funimation dub), but I wasn’t bothered. It’s one of the few colorful moments of the entire movie, which is what I want out of a “Dragonball” flick. Bulma and Chi-Chi get minor parts, with the former being the damsel in distress…As for our new villains…Ugh. 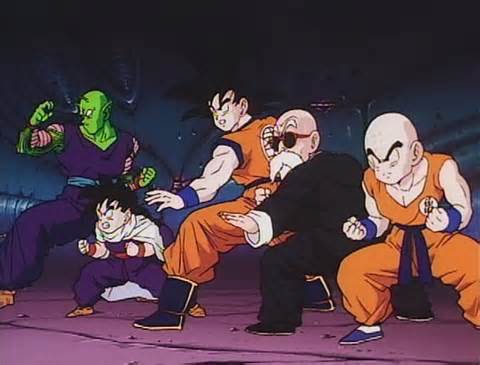 Dr. Wheelo sucks. At his core, he’s just a generic villain who wants to take over the world. There’s absolutely nothing else to his personality, outside of how much of a moron he is. Garlic Jr had a much more dynamic personality that could be comical or scary without ever trying too hard to come across as one or the other, and he even had motives which were almost sympathetic. Dr. Wheelo is always serious and always does evil villain stuff for the sake of doing evil villain stuff. But he also doesn’t make sense. A brief flashback shows he had the body type of a normal human, so how come his brain is so gigantic? He wants Goku’s body because he figures that the smartest brain and the strongest physical form is a winning combination. That’s fine, except it turns out his robotic body is FAR stronger than Goku AND his friends combined. How does he not seem to know that Picollo is stronger than Master Roshi? He’s been experimenting on Picollo for quite some time before confronting Roshi, yet even though it’s established he can sense power levels, he doesn’t notice this? I guess his size provided a different kind of fight, if anything. But he only participate in squash battles, where he either pwns his enemies or gets pwned himself. The battle with Garlic Jr was better because it was more of an even match. His henchman have gimmicks, but not personalities, which the previous Dragonball film also had. This lot is just boring, they don’t make a lot of sense and they don’t seem to have any kind of braincells…which is ironic, considering how the leader is a giant brain.

Reviewing “Dragonball Z: The World’s Strongest Man” is difficult because it’s easy to sound very negative. It’s inferior to “Dead Zone” in every way, including the fight scenes. But at least said fights are still good. Everything else, from the animation quality to the writing is just kind of sucky. It’s ugly to look at and the writers just seemed to be making up their story as they went, without noticing how nonsensical everything about it was. The movie manages its time awkwardly, lingering on irrelevant and uninteresting shit, while skimming over the important shit, so I often found my eyes drooping from exhaustion…and yet…It’s not that bad. It entertained me in parts, and those parts were usually really cool. As a Dragonball fan, I guess I could call “The World’s Strongest Man”  acceptable filler, but even I can’t say I was satisfied. Yet if memory serves, there are some worst movies I will have to deal with…Oh yeah, I would skip the funimation dub this time around. Everyone is phoning it in and Dr. Wheelo’s voice actor is especially lifeless. I remember the original Ocean group cast doing a better job and even the Japanese version is superior. Don’t get me wrong, the modern funimation dub is still acceptable, but this isn’t their best work.

Violence: It’s actually probably less violent than the first one.

Overall: “Dragonball Z: The World’s Strongest Man” isn’t very good, but at least it has some good parts.