Plot: Bulma’s birthday party is interrupted by Bills- the god of destruction- who wishes to test the powers of the Super Saiyans. Unfortunately, that means if they fail, he’s going to destroy the Earth…Happy 38th, Bulma?

“Dragon Ball” month has been such a tedious trip down nostalgia road that it feels like it has actually been two months! For those lost travelers who happen upon my dilapidated and most likely haunted website many years from now…it has been two months and I was trying to be humorous. I also suspect that I am haunting my own website, but I have never been the brightest shoe in the tool shed. If I were, I probably would’ve never become so emotionally attached to this cheesecake franchise that is full of redundancy, continuity errors, plot holes and was created by a guy who apparently forgot what Super Saiyan 3 was. Make no mistake, “Dragon Ball” is not an intellectuals’ anime, even if the intellectual in question were mentally handicapped. It’s stupid, but…it’s my childhood. I love it for its stupidity and that love has branched out to be even stupider serial films. Although this journey has been a strange one. I’ve embraced DBZ films I initially didn’t care for (“Cooler’s Revenge“) and pushed away films I initially did care for (“The World’s Strongest Man“). I’ve learned that Broly fans only love Broly for his looks, otherwise they would’ve pissed on “Broly- Second Coming” the same way they pissed on “Bio Broly“. I came to respect ‘Goku x Vegeta’ as the most developed romance within the franchise, thanks to their heart wrenching love story in “Fusion Reborn“. I’ve also realized that our heroes are a bunch of masochists, as they usually don’t use their trump cards until all seems lost even though they could’ve saved themselves the pain and pooled their energy in the very beginning (“Wrath of the Dragon“). I’m sure I shall apply these important life lessons into my own daily schedule. Yet the problem with Dragon Ball month was that while my opinions had often changed, I still remembered most of these flicks quite clearly. Watching them was unnecessary, except I did notice the flaws a lot more because I have become a snooty critic since my childhood. That sort of soured the experience. But the past two months have lead up to this one single event…

With “Dragon Ball GT” killing off the franchise, Goku and the gang was suddenly confronted with an evil foe who threated their entire universe: “Dragon Ball Evolution“. Much like how Toho hated the American Godzilla remake so much that they brought back their favorite green Lizard just so they can get the taste out of their mouth, Akira Toriyama wanted to redeem the franchise in the eyes of the fandom. So he would personally put together an animated Dragon Ball Z movie, which would ignore “Dragonball GT“- but for some reason acknowledge that stupid 2008 special episode- and make fans proud to be fans once more…presuming he can remember what color Android 18’s hair was…This formed “Battle of Gods“, which was the only moment of “Dragon Ball” month I was really looking forward to, because it’s the only film I haven’t seen. But hopes can easily be crushed, so was this a happy experience or not? “Dragonball Z: Battle of Gods” continuously made me smile, even when it continuously was making missteps that would usually annoy me. But I was never annoyed, so the question is whether these happy feelings were born from nostalgia or quality, a mystery I hope to solve by the end of this review. 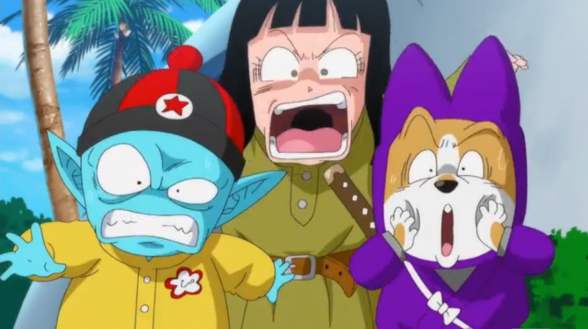 “Battle of Gods” has a more light hearted and comedic tone than all of its predecessors, being more reminiscent of the original “Dragon Ball” series (fitting that Pilaf returns). Even when things turn more serious and dramatic, which is never for very long, I never felt like the characters or Earth were in any real danger. This is usually a criticism, but “Battle of the Gods” is not trying to be intense. It’s trying to make the viewer laugh or at least smile, even when the situation becomes dire, and I almost always appreciated the comedy. I was very amused at how the characters don’t seem to be very concerned that they’re all about to be destroyed, even after their best warriors have just had their asses pwned. Bulma seems to be more irked that her birthday was ruined. I almost want to say it’s satirizing how cheap death has become within this universe thanks to the dragon balls, but whether that was the intent or not, it still cracked me up. Now I metaphorically urinated on “Broly- Second Coming“- although I also literally urinated on it- for the same reasons I’m praising “Battle of Gods“. That’s because “Battle of Gods” isn’t castrating a (formerly) impressive villain and it doesn’t suffer from severe mood whiplash. Bills might be MUCH stronger than all of the previous villains combined, but he is also the most humorous enemy that the gang has encountered since the “Z” was added to the name. It’s all about context and “Battle of Gods” never really ceases delivering laugh or fights. It boasts a full length feature running-time, but it also has the breeziest pace. It’s never too slow, nor does it suffer from any kind of burnout. There is a perfect balance between action and comedy, so it never becomes stale. For all the problems I might have with this flick, it still always entertained me.

“Battle of Gods” provides the most technologically advanced animation quality and battle sequences, yet I wasn’t very thrilled with this movie on a technical level. Don’t get me wrong, there are some really cool moments and the visuals are colorful. I did love the score, which added a certain level of class to the action scenes. My favorite track is “Birth of a Super Saiyan god“, because it made what would’ve been the most retarded scene in the entire movie actually work. I did appreciate how the fights were fully animated, which they BETTER be considering how much money went into this project, but the battles were too one-sided for my tastes. Bills is simply too powerful and he doesn’t get a real match until the end. I didn’t mind that he discarded Picollo, Tien and Android 18 with disturbing ease. But I cringed at how badly Buu, Gotenks and ESPECIALLY Gohan performed. Gohan should be the strongest person there, but even Vegeta held his own better than the mystic Saiyan. The only real fight is the final clash between Goku and Bills, but it’s ruined by excessive CGI, which is VERY distracting. I understand that CGI is becoming a more prominent tool, even in animation, but it never blended with the traditional anime style that dominates most of the screen-time. It was as if footage of a video game cut scene was spliced into the movie. I also couldn’t help but wonder how in the hell the planet was surviving any of this. In the past, the force of certain techniques would create craters in the Earth. Yet Goku and Bills are fighting in cities and it never seems like there is any collateral damage. But above everything, I did enjoy the fight scenes to an extent, but the use of CGI bothered me. Personally, I think “Wrath of the Dragon” was more impressive when it came to the animations simply because it was consistent.

So with the longer running time, that means we will get to see our heroes do more, right? Erm…the fact that I’m asking should probably tip you off to the answer. I’m guessing that the filmmakers don’t feel the need to explore the main cast for the serial films because the TV show and manga have already done that. So more time is spent on the new additions, whether it’s Tapion or Bills. Luckily I found Bills to be far more entertaining than Tapion. There are so many layers to this guy. He can be amicable just as much as he can be genocidal. He has an impressive presence, while also having enough clumsy moments so you can never take him too seriously. If he was someone like Broly (as in the Broly from “Broly- The Legendary Super Saiyan“), he would’ve disrupted the tone. I just wish his power was scaled down, as I prefer my fights to be…well, actual fights. Not just beatdowns. Whis is a fun foil for Bills. Vegeta actually gets more of a character arc than Goku, but he doesn’t act much like Vegeta. At least his OOC moments are pretty amusing. I was happy that he gets a moment to shine, but I think they should’ve made him go Super Saiyan 3. It doesn’t make sense that Super Saiyan 2 Vegeta has surpassed Super Saiyan 3 Goku, although I also don’t understand how Super Saiyan 1 Goku becomes stronger than Super Saiyan 3 Goku. Speaking of whom, Goku has been hit-or-miss in regards to these serial films and this was kind of a miss. He’s not annoying and acts like normal Goku, but Toriyama seems more interested in other characters while still cramming Goku into the hero spot. I thought the Super Saiyan God transformation was kind of dumb. I didn’t like the ceremony which accompanied it and the design was very lazy. It made me miss Super Saiyan 4. Pilaf’s group returns and I thought they were cute, although the thing with Mai and Trunks was sort of creepy. Trunks gets a more substantial role than Goten, but it’s still a minor part.  Whether it’s the films, TV show or manga, Bulma goes back and forth between charming and annoying. Here, she’s the former and she has a reasonable amount of screen-time. Her fans should be pleased. Even though Gohan and Videl have a subplot involving her pregnancy, it’s barely glanced over until the narrative has a use for it. Everyone else is lucky to get more than one line of screen-time, but it was nice to see everybody again. I saw the Japanese version and I thought the voice actors sold the comedy very well. I stress that because there isn’t much else for them to do. Random Note: Bills says Goku wouldn’t be able to defeat Frieza without turning into a Super Saiyan, which made me happy simply because Frieza had lost all credibility in the anime. After it was implied that Goten and Trunks could defeat Frieza in their base forms in the 2008 special, it was nice of Toriyama to treat the iconic villain with some degree of respect.

So now that I’ve explained me feelings regarding “Battle of Gods“, did I appreciate the film on its own merits or is it just nostalgia?…It’s definitely nostalgia. But I do think that Toriyama designed this movie with that in mind. He uses the technical aspects- from the story to the visuals to the characterizations- as a sword while its nostalgic value acts as armor. Yes, there is a lot to criticize, but it’s so hard not to squee at Goku or Vegeta participating in a new battle! I enjoyed this movie primarily because it was nice seeing my favorite characters again. But I also appreciated many of the technological improvements, the longer runningtime and the new villain. It’s a fun movie, even though “Dragon Ball” fans are the only ones who will truly ‘get it’. And with that, Dragon Ball month has finally concluded. I do hope they continue making more DBZ flicks. I’d like to think of “Battle of Gods” as a kind of warm-up exercise for much better things.

Violence: It’s not especially violent, although there is a lot of fighting.

Overall: “Dragon Ball Z: Battle of Gods” is a blast for us fans, but is probably a ki blast in the face for you detractors. Ha, see what I did there?!