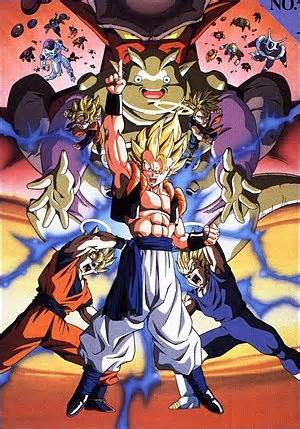 Plot: A mysterious being destroys the barrier between life and death, which resurrects many villains who have threatened the Earth in the past. While Gohan, Goten and Trunks fight defensively in the living realm, Goku, Vegeta and Pikkon take on the biggest threat in the afterlife.

“Dragonball Z: Fusion Reborn” is…weird. It has a weird sense of humor, a weird visual style, a weird villain, a weird gimmick and the characters tend to do or say things that are simply weird. I have to admit that at first, I can’t say I was really enjoying myself. The cartoony animation style took some time to adjust to and I felt this was wasting a perfectly cool plot. Hell, the plot was so cool that “Dragonball GT” blatantly ripped it off and promptly wasted it as well. I mean, having the dead come to life offers so many possibilities- old enemies uniting to get revenge on our heroes. Unfortunately, this only leads to a brief and disappointing resurrection of Frieza, who seems to be leading Bojack and his crew even though that makes absolutely no sense…But nor does a lot of “Fusion Reborn“. I’m still not entirely sure how Janemba was formed, how his powers worked and how he freaking died. But back to my original point, the only real pay-off that the ‘dead coming to life’ idea delivers is seeing Gotenks wipe out Hitler and his army…Yes, you heard that right…This movie is freaking weird. I’m more curious how they got rid of Bojack, who SHOULD be about as strong as Gohan was around that time. Or what about Cell? Or Broly? The whole resurrection thing is pointless, damn it! Yet…while the road to enjoying “Fusion Reborn” had a bumpy start, I ended up having a blast with this serial film. It’s so…it’s so freaking weird! And gay! And weird! But I began to love its gay weirdness. This might even be my personal favorite DBZ flick, even if it’s not the best.

Fans should be pleased that this has one of the larger casts, probably the most diverse since “The Tree of Might“. We have Goku, Gohan, Trunks, Goten, Pikkon and Vegeta all having hefty roles, with Videl having an extended cameo and Hercule showing up at one point (AND WINNING!). Gogeta and Gotenks also make their cinematic debuts. In terms of characterization, this has to be the most entertaining Goku has ever been, as he’s not the invincible boring hero as much as he’s a good natured prankster. His facial expressions were just downright adorable when he first encounters Janemba too. Gohan felt a little out-of-character for me and I’m not referring to his Great Saiyaman role. I didn’t mind him, but he just didn’t feel like Gohan. Goten and Trunks are their usual selves, but they’re restrained so they never tested my nerves. Pikkon is more comical than his canon counterpart, apparently to downplay his resemblance to Picollo (where was he during this film anyway?). I personally liked the shift in his personality, as he was pretty funny. Vegeta…*gasps* gets to have a good fight on his own?! Sure, he loses but it makes more sense for him to do so when compared to his swift defeats in “Bojack Unbound” and “The Return of Cooler“. If anything, he did much better than he should have, but you won’t hear any complaining from this Vegeta fanboy! Vegeta also gets to showcase more facial expressions, which are pretty amusing without betraying his characterization. The humor in general is just odd…but that is also what the movie is going for. I mean, the villain’s super strong barrier can withstand ki attacks of any power, but it crumbles under the ANCIENT ARTFORM OF…cursing?! Why? It never explains. The dubbed version changes this into insults, but that’s just as bizarre. Yet these silly lines, actions, reactions and scenarios liven up the characters and the plot.

“Fusion Reborn” has absolutely no desire to take itself seriously, even if the villain is kind of intimidating. It’s goofy from beginning to end… Sometimes I wasn’t even sure if I was supposed to be laughing. You have your normal weird humor, like the botched Gogeta transformation which results in Fat Gogeta farting on Janemba. This would usually be kind of stupid, but the fact that his flatulence seems to be an effective weapon made me smile and King Kai encouraging him to “use the gas!” evolved the smile into a laugh. But then you have…fusion…where two bodies become one…Was it just me or was the homoeroticism present between Goku and Vegeta…very ripe? I have to wonder what Japanese audiences felt when hearing this, as “becoming one” is a euphemism for having sex over there. If I didn’t know the context of what fusion is supposed to be in this world, I would presume Goku is ‘coming’ onto Vegeta….get your mind out of the gutter!…and Vegeta is saying no. “I’ll never join bodies with you clown!” he yells, but Goku insists. “N.O, not in a million years Kakarot! So don’t ask me again!“. Goku finally backs down, smiling sadly and awkwardly: “It’s been a while since we’ve seen each-other. There’s no sense in fighting all the time“. Ultimately Vegeta agrees, but has second thoughts just as magic is about to be made. He yells “we’re warriors, not ballerinas!“, but Goku assures him “we’re all alone out here. No one’s going to see us“. Vegeta’s eyes quiver as they begin…Oh my God, this is f@cking hilarious! I don’t know if I have a sick mind or if that was intentional, but I was laughing my ass off. “Watch those fingers, those index fingers have to be perfectly stretched!“. Pardon me as I noisily suppress my snickering.

As for our new villain, as I’ve said, Janemba makes no sense. But he does provide weird and surreal backdrops, cool weapons you don’t see too often in the Dragonball universe and a justification for the cartoony animation style. At times, I felt like I was watching the original “Dragonball” again. Janemba himself was a bit of a missed opportunity, as he doesn’t have an actual personality. He looks awesome and has very distinct abilities, but he just laughs evilly and likes to do evil things…Why isn’t he as popular as Broly? Because I just feel like I described “Broly- Second Coming“…except this movie didn’t suck, although maybe Vegeta did some sucking if you know what I mean…hehehe… Janemba doesn’t even have any form of speech outside of his name and his first form…it’s intended to look retarded, but the second form makes up for it. The fight scenes were pretty cool, maybe a bit too slow paced at times, but there’s enough variety within the techniques that they never become stale. I also liked how strategies were used, although I’d say the battles work primarily because Janemba is the perfect villain to play off of. His skill set puts our heroes in some very unusual situations, which made the fight sequences compelling. I also thought the overall pacing was swift, never burning itself out or slowing down for too long. I was continuously entertained, at least once I got used to it.

On an objective level, half of the actual plot seems unnecessary as the ‘living dead’ are not threatening enough. Sure, they say that the problem is how the dead can’t stay dead, but it never factors into anything. Any villain who shows up dies only once. The fights are good, but they aren’t the best examples of the serial films. The villain has no personality. The comedic tone diminishes any potential for suspense and keep in mind DBZ usually had a more serious tone (in contrast to “Dragonball” and “Dragonball GT“, where “Fusion Reborn” wouldn’t feel so out-of-place). The animation style is more likely to annoy longtime fans than impress them, even though I suspect the majority of viewers will barely notice. On a subjective level, I really enjoyed myself. I generally laughed at the humor and even laughed when it wasn’t trying to be funny. It might not be high art, even in regards to previous DBZ movies, but everything about it clicked with me. “Fusion Reborn” is one of my favorite Dragonball Z movies, even if I can’t call it the best. I shall end this review on a note of homoeroticism that represents my feelings, from Goku to Vegeta after their “fusion” ended: “What do you mean? I loved every minute.”

Overall: “Dragonball Z: Fusion Reborn” is a PERSONAL favorite of mine.