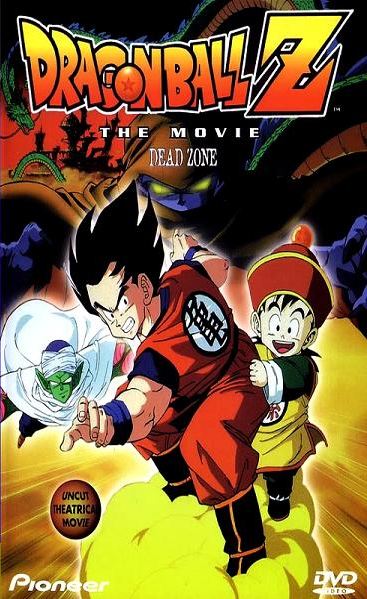 Plot: The worlds strongest martial artist, Goku (Sean Schemmel), must team up with his most fierce enemy, Picollo (Christopher Sabat), in order to rescue his son- who has been captured by an immortal tyrant named Garlic Jr (Kyle Hebert). Also known as “Dragonball Z: Son Goku super Star” and “Dragonball Z: The Movie”.

I was around 9 years old when I first came into contact with the “Dragonball” franchise, although our meeting was an accident. I was a huge fan of a failed martial arts show called “WMAC Masters”, and “Dragonball” happened to be the lead in show- so while I waited for “WMAC Masters” to start, I decided to give “Dragonball” a look despite not really knowing what anime was. Sure, my sister watched “Sailor Moon” and I adored “Ronin Warriors”, but I didn’t differentiate between Japanese anime and American cartoons. Unfortunately, the ratings must’ve been weak because “Dragonball” was taken off the air even before “WMAC Masters” was cancelled. They didn’t even complete the Pilaf arc, if I’m remembering all of this correctly. Years later, in middle school, I ran into the franchise again and was…very confused. It was now called “Dragonball Z” (Frieza arc) and while I recognized Bulma, I thought Goku was Yamcha and Gohan was Goku…It took some time before I figured out that I was viewing the sequel. Yet this was during the stage where “Dragonball Z” found itself becoming a HUGE phenomenon and despite my confusion, I was hooked. I was a loyal fan of the franchise until sometime during the middle of the Magin Buu saga…in which I just stopped watching. This was during my High School years, so maybe I just felt like I was too old for anime. Maybe I didn’t like how my childhood favorites had been reduced to extras. Maybe I didn’t like how stale the fight scenes had become. Maybe I didn’t like how the only way to remain relevant was to be a Saiyan. Either way, I grew bored…but I don’t review TV shows, I cover movies- so I shall discuss each of the “Dragonball” movies in detail. “Dragonball Z: Dead Zone” is probably impossible to enjoy if you’re a stranger (or worse, a detractor) to the franchise, but it represents everything I loved about the original TV show before its monotony began to kick in. Ah, how nostalgic…

Even though yes, “Dead Zone” does employ speed lines to deliver some of the action, it uses those corner cutting tactics sparingly. In fact, the quality of animation for this short film is a handful of steps above the source material. Everything moves with a surprising amount of fluidity, although this is common regarding animated movies based off of TV shows, as they generally commanded bigger budgets. Yet it’s important to remember this because if memory serves, not every “Dragonball Z” movie boasted this level of production values. The Characters are more detailed, especially in their faces and the director uses shadows, moody lighting and abstract visuals to give some flavor to the action. The orange and red backgrounds were pretty cool and having them break like glass at the end was a nice touch. I think my favorite aspect though has to be the fighting itself. You feel the characters are using different martial arts styles based on their stances and techniques. One of the reasons I got bored with the show is that eventually everyone started to look the same when it came to how they fought, the only differences being their signature ki blasts. Even though ki attacks do appear in “Dead Zone”, they aren’t as prominent and are strategically used by the fighters. The scaling of power levels provides more entertaining battles as well. During the later days of the show, if a stronger person confronted a weaker person, they would likely end the fight with one blow. But here, the weaker fighters are usually skilled enough that it takes multiple attacks to bring them down. Example, when Picollo pwns one of the villains, he uses an onslaught of hand strikes before a big punch- which his enemy attempts (and fails) to counter. If this happened during the Cell Saga, it would take a single punch and the enemy wouldn’t be able to react at all. That’s not even a real fight. It’s a beatdown and when that seems to dominate 90% of the action, it becomes boring. But here, other than Chi-Chi being taken out immediately, even the one-sided battles resemble action fights. That is awesome and there was a time when the anime series was consistently like this too- before Super Saiyan was introduced. So that’s what I refer to when I say “Dead Zone” represented everything I loved about the TV show, because it was made long before the series became enamored with the monotonous, one-sided beatdowns. Oh yeah, how could I forget that there is a (brief) WEAPON clash? When two villains draw swords, Goku resorts to wielding his power pole. It might be a short sequence, but it was pretty epic. 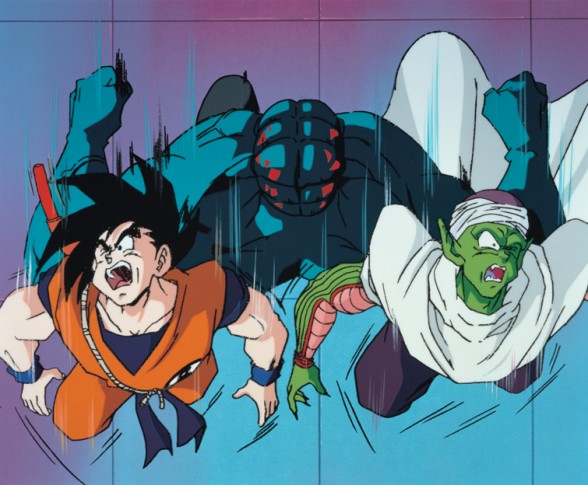 The tone has baffled some of the viewers, but I was okay with it because it represents a transition between the goofy, light hearted, martial arts comedy of “Dragonball” and the darker, apocalyptic action oriented “Dragonball Z”. Yes, Gohan is pretty annoying and every watcher will have a ‘wtf’ reaction when he gets drunk/high and starts hallucinating about dancing purple dinosaurs (what the f@ck?). I did groan at some of the toilet humor, like when Gohan pees on Krillin’s head (who stupidly looks up so he can accidentally drink it)…But that’s “Dragonball” for you. Some parts did make me laugh though and at least “Dead Zone” isn’t especially grim. I remember watching a “Yu Yu Hakusho” movie which was incredibly well made, but I was bothered by how humorless it was, even though comedy was a major part of that show. I prefer the dubbing for “Dragonball Z” in general, primarily because I can’t take the Japanese version seriously. Whenever the voice of a woman speaking like a boy would come out of a grown mans body, it would distract me. I actually remember preferring the Ocean View Dub over the more popular Funimation dub, but maybe that’s nostalgia speaking and the funimation dubbing is still very good.

Of course, there are some glaring flaws. When you think about it, Gohan being kidnapped makes no sense and is only there to force Goku into the story. The continuity errors are especially noticeable, although to be fair, the most famous example isn’t this movies fault. None of the films are intended to take place within the continuity of the TV show, so “Dead Zone” pretty much replaced the Raditz arc…except for some bizarre reason, the TV show decided to make this canon much later on with the controversial Garlic Jr saga…whoops…I won’t explain the inconsistencies, because they are the fault of the TV show. But “Dead Zone” does show off some of its own continuity errors. How come Kami thinks Goku has killed Picollo, even though he should know what Goku’s power level feels like…and that if Picollo is dead, Kami would be as well? Or what about how the villains think they’ve murdered Picollo, knowing that Kami will die as a result, but don’t seem to realize that the dragonballs would disappear as a result? I also thought it was odd how Goku and Picollo are between Gohan and Garlic Jr when the titular Dead Zone is unleashed, yet some shots blatantly contradict this. There are a lot of holes that fans of the franchise will notice, while strangers/detractors will just be confused as to what is going on. The plot is minimal and there is no back-story, so don’t expect anything- from the plot devices to the characters’ relationships- to be explained…Also, Garlic Jr was the victim of some bad character writing. He’s supposed to be highly intelligent and throughout the majority of the film, we see why he is the only villain to succeed in achieving immortality. That creates a problem though, as how can you defeat someone who can’t be killed? So in order to correct this little issue, the writer has him perform the most idiotic, contrived, cop-out bullshit maneuver to ever grace the franchise- which was already filled with idiotic, contrived, cop-out bullshit maneuvers. “Dead Zone”, I love you and all, but you’re pretty f@cking stupid. At least we can take solace that when penning the Garlic Jr saga, the writers wouldn’t make the same mistake twi- oh wait, THEY DID!

I actually wish “Dragonball Z: Dead Zone” was longer, because its technical successes are impressive and if they fleshed out the story more, the franchise could’ve acquired a bigger audience. Garlic Jr, outside of his moments of plot induced stupidity, was a cool villain and his henchman all had wacky and unique designs. They were threatening enough, but could be amusing as well. I enjoyed the atmosphere, the action and the character interactions. Goku and Picollo get to have more flavorful personalities this time around, with Picollo being more expressive and Goku being more cocky. In the show, Goku becomes a stale hero and Picollo becomes too serious once he turns good. They’re the only prominent characters, although Kami and Krillin get decent supporting roles. This might be Kami’s last real fight before he became useless. As a Dragonball fan, I was more than satisfied, but I also think “Dead Zone” was kind of a missed opportunity. Unlike most of the following DBZ flicks, there was a lot of potential for a stronger story, especially when you remember that Garlic Jr is the only villain to truly acquire immortality using the dragonballs. Yet at 40 minutes long, “Dead Zone” only has time to deliver non-stop action, but thankfully the action is freaking awesome.

Violence: PG-13 worthy…I guess? Only because people get beat up and die.

Overall: “Dragonball Z: Dead Zone” is designed only to please existing fans of the franchise, but it succeeds! It’s just so cool! While I’ll use my normal rating system, I’ll also add a new one that’s more specific.