(Written and Directed by Scott Stewart) 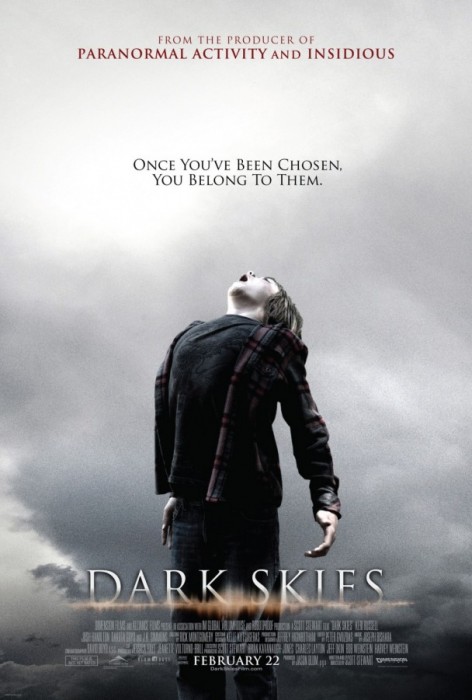 Plot: A family begins to experience strange, paranormal occurrences that causes tension to form between them. They soon realize that the unseen menace is of an extraterrestrial origin, but what do these aliens want from them?

I have to admit that I wasn’t very interested in seeing “Dark Skies“. The trailer made it look like another “Paranormal Activity” knock-off, except with an extra dosage of unintentional hilarity. I’ve said it many times before, but I’m tired of these cliched ‘possession/ghost’ films and I wish audiences would find a new brand of horror to embrace. I’d later on discover that “Dark Skies” would be about aliens, not ghosts, but this didn’t help things. The last time I saw a movie attempt to combine aliens with the current horror trend was “The Fourth Kind“, which only got worse upon subsequent viewings- I gave it a 2/4 stars during my first watch. I wasn’t sure what to feel when I learned that Scott Stewart was the writer and director. He had previously helmed “Legion” and “Priest“, two movies that had a lot of interesting ideas, but the execution left a lot to be desired. I think he has talent, but whereas his previous two films were somewhat creative, “Dark Skies” appeared to be his attempt at creating a safe, box office success. Then it wasn’t screened for critics, which is never a good sign. Everything pointed to ‘disaster’, but do you know what? “Dark Skies” isn’t a disaster. I almost wish it was, because then I would’ve at least felt…something about it. This is not a bad movie, but all of its successes tie in too closely with its failures, dragging the feature down into the deep pits of “meh”.

Despite the new menace, “Dark Skies” tells the same story as “Insidious” or any of the films molded from the current horror craze. You have a family of four. One kid (Kadan Rockett) is innocent, accepting the abnormal entity as part of every day life and is bewildered when his parents or brother confront him about it. The older one (Dakota Goyo) is a rebellious brat, constantly fighting with his Father (Josh Hamilton). The Mother (Keri Russell) is smart enough to realize that there might be a paranormal presence among them, but the Father is skeptical, even when it’s painfully obvious that they aren’t ‘alone’. The ‘visits’ start off small, but grow increasingly dangerous as time goes on. They seem to have especially taken an interest in the children. The parents track down the resident expert, who’s only there to give exposition, but he doesn’t inspire much confidence for our protagonists. “Dark Skies” might be dressed differently, but it isn’t exploring any new territory. In fact, it blatantly steals from “Poltergeist” and “Signs” at times. The ending suggests that the writer was attempting to be thematic. The family is only vulnerable to the aliens because they aren’t united, but this idea is not handled very well and the finale was a total let-down. On the other hand, I never was bored. I won’t say that it’s ‘fast paced’. It’s erratically paced, continuously speeding up and then slowing down, but the “scares” come earlier than most. If you don’t like slow burn suspense, you might think “Dark Skies” is a little more exciting than most of its ilk. 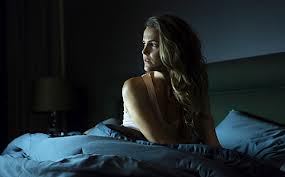 I could’ve forgiven the conventional story if the characters were more endearing. Within the first 10 minutes, everyone is already bitching at each-other. The Father is bitching at the son for his poor choice of friends and the son counters with his own bitchfest. The parents are going through some marital problems surrounding some major financial issues, so bitch at each-other. The Father lies about an interview, which pisses the Mother off, but then she keeps her own secrets, which pisses the Father off. Everyone is always fighting and yelling and you’re not sure who you want to smack more. Obviously these are normal human reactions, but they’re used as character establishing moments. THAT IS HOW WE ARE INTRODUCED TO THEM! It made the non-horror sequences aggravating, especially when you consider the filler. There are subplots involving the son’s friend, his love interest, the Father’s attempts to get another job, the Mother trying to sell the house. These scenes are there to flesh out the characters, but they don’t go anywhere and because I disliked the characters, I disliked their subplots. Luckily, the acting is stellar, even if the actors reminded me of more famous people. Josh Hamilton resembles Jim Carrey at times and the sons’ love interest looks like a mix between Emma Stone and a young (pre-disgusting) Lindsay Lohan. However, I can’t completely praise the actors and actresses either, because….well, read on.

“Dark Skies” occasionally did make me shiver in anticipation. The alien designs are pretty standard, but I thought the director utilized them effectively. Whenever we’d see them in the background or they’d suddenly appear in a flash, I’d usually jolt. Granted, the zingers were a bit desperate, but they worked. Unfortunately, “Dark Skies” relies a lot on its actors  when it comes to the creepy moments. This is where the ‘unintentional humor’ comes into play, as it’s hard not to snicker whenever someone would start pounding their head against glass, would become slack-jawed or shriek like a little girl. I especially love their stiff walks, which look like they were lifted from an old Monty Python sketch. To be fair, I blame the director for telling them to make those stupid faces, not the actors themselves. The atmosphere is very foreboding, but the tone is inconsistent. The movie would be dark and edgy, but then a light-hearted- maybe even goofy- sequence would occur. I know that the director was attempting to break the tension, but it felt out-of-place.

The sad thing is, when it works, it works well. This is not an unwatchable movie, as it was able to occasionally creep me out and keep me somewhat entertained. It’s not as flawed as “The Devil Inside“, nor is it as boring as “Paranormal Activity 4“. I can’t even say its mistakes were devastating. There was a time when I would’ve given “Dark Skies” a passing score of 2/4 and I will even concede that I ‘enjoyed’ it on that level. But these days, I’m sick of this level of mediocrity. I want something more impactful, more daring, more creative and more ambitious. I don’t want to see a movie that has a script that could’ve easily been a discarded draft of another film, but it was then tweaked to be something else. Furthermore, while it can be eerie, I never found “Dark Skies” to be especially scary. “Sinister“, “The Woman in Black” and “Insidious” might’ve been just as formulaic, but they hit hard in the scare department. Even “Paranormal Activity 3” had more exceptional moments than this did. As of 2013, there isn’t really any need to watch something like “Dark Skies“. We’ve seen it before and we’ve seen it done better.

Nudity: None, although there is a pre-sex scene.

Overall: If you love these kinds of horror films, I suppose “Dark Skies” is worth a rental. Otherwise, don’t bother.