Plot: Paranormal Investigators Lorraine (Vera Farmiga) and Ed (Patrick Wilson) Warren travel to London to assist a poor family who are being plagued by malevolent spirits.

Why is “The Conjuring 2” good, despite it arguably suffering from the same flaws which ruined “Annabelle“? Neither film explores new territory, whether we’re discussing story or scares and “The Conjuring 2” perhaps takes this even farther by directly emulating the structure of its predecessor. Once again, the victims are a large, loving-but-dysfunctional family with financial problems. Once again, the Warrens are considering retirement because of how badly Lorraine was affected by a previous case case, but can’t step away from their bizarre profession. Once again, there is a ‘twist’ surrounding the haunting itself and they even fit in that same spinning toy which was so prominent in the first movie. Once again, a psychic has an out-of-body experience to combat the entity. “The Conjuring” was clever because it defied a lot of the conventions which haunt the genre. Everyone- from the cops to the parents- witnesses the paranormal firsthand very quickly, whereas usually a lot of screen-time is built around how no one believes the primary victim(s). “The Conjuring 2” continues with this mentality by acknowledging the cliches just so it can boastfully avoid them, which I personally adore. I love it when the Mother angrily scoffs at the idea of a haunting, only to experience it herself within seconds, sparing us the awkward family drama that usually accompanies these stories. There are also signs that the neighbors might shun them or the police may suspect child abuse, but these ghosts aren’t shy and make their presence known- while the cops and neighbors do what (little) they can to help. “The Conjuring 2” even has the family almost immediately fleeing the house, something that should not be a praise because IT’S F@CKING COMMON SENSE, but most examples of the genre apparently don’t have that. I love it when filmmakers take stale formulas and go against our expectations, but “The Conjuring” already did all of this, so it no longer seems that unique or intelligent. So once again, why does “The Conjuring 2” still manage to be so good? Even when it’s doing nothing new?

For one, being pretty damn scary will take you pretty damn far when it comes to this genre, regardless of how unoriginal your script is. I should point out that what frightens us is rooted in very subjective emotion, so “The Conjuring 2” might induce yawning for you, just as something which terrifies you could easily put you asleep. But James Wan successfully used ominous lighting, sinister scare chords and patient build up to creep under my skin, making me vulnerable to the (earned) jump scares. The camera movements enhance the visual style, without diminishing or distracting from the looming dread. Furthermore- Wan might be the first director to successfully incorporate computer generated imagery into a horror flick, as that dog transformation freaked me the f@ck out. The problem with CGI in this genre is that it’s too flashy to be spooky, so the effects don’t really synchronize with the atmosphere (see “Mama“…actually, don’t). But the CGI here found the perfect balance of convincing and uncanny, while Wan kept it consistent with the mood. The crooked man was so startling that I almost feel compelled to criticize “The Conjuring 2” for selecting the spooky nun as its primary antagonist instead of whatever the f@ck that abomination was (kind of reminded me of “The Babadook“). I did notice that Wan seemed to be borrowing a lot of the scare tactics from his previous horror exploits, particularly “Insidious: Chapter 2“, which is strange considering how it’s regarded as one of his weakest efforts. There are a lot of familiar cues, such as the transgendered demon dressed in black, but this didn’t detract from their effectiveness. I still felt the anxiety and I still jumped whenever “The Conjuring 2” demanded it of me. This is purely speculation- but I feel like Wan recycled the chills from “Insidious: Chapter 2” just so he could improve upon them (and he did). In contrast to the bleak colors and extensive use of shadows, “The Conjuring” and “The Conjuring 2” are surprisingly optimistic and upbeat compared to other examples of the genre. There is genuine warmth in the interactions of the characters, making me want to see them emerge victorious and the comedy provides levity to the grim situations. Isn’t it fascinating that Wan, whose “Saw” arguably began the trend of depressing horror, has lately opted for a much lighter tone for his movies? If anything, I think it’s a refreshing change of pace. Once again, “The Conjuring 2” isn’t doing anything that the first one hasn’t already done, but both films can stand out amongst the crowd together. The acting is really good too, with the performers being able to showcase a variety of emotions- rage, joy, sadness, fear and more. I’ve always found it bitterly ironic that the horror genre puts so little effort in acquiring good casts, as we’re more likely to find something scary if we can believe the characters themselves are scared. 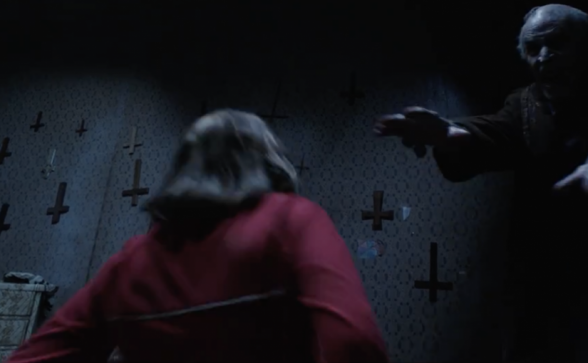 Even though “The Conjuring 2” and “Annabelle” borrow so much from “The Conjuring“, Wan’s previous entries in the genre and…possibly every other haunting story ever told, the difference is that one feels like it was crafted by actual filmmakers, while the other feels like it was processed by a machine. “The Conjuring 2” has heart, makes sure to spend a lot of time fleshing out its characters and their internal conflicts (perhaps too much time, as it goes beyond the 2-hour mark), builds an ample amount of anxiety and has fun with its scares. The film moves at a relatively quick pace, boasts exceptional cinematography, effects, editing, acting and most importantly- made a connection to me. I am a little disturbed that so many writers were attached to this project, considering how it’s dusting off the formula of its predecessor and I think it could’ve been a lot cooler if they played up the ambiguity of the situation. The Warrens consider the possibility that this might be a hoax throughout the majority of the runningtime, but we’ve witnessed the paranormal occurrences ourselves, so it’s kind of a wasted angle. This is more of a missed opportunity than a criticism, as “The Conjuring 2” would be much more original if it was unclear whether a haunting was taking place. Granted, that would be a difficult challenge for the filmmakers, but movie making isn’t supposed to be easy. As for real complaints though, I didn’t like how certain supporting characters would just vanish after being set up as important. Maurice Gross (Simon McBurney) gets to share his back-story, which made me appreciate his character, but his absence during the finale made his arc rather pointless. Also, what happened to Camilla (Emily Tasker)? She had a colorful personality and seemed like she would be relevant, but she disappears after the first 15 minutes. These threads were possibly cut down, but perhaps should’ve been removed entirely, as what’s left only devours screen-time. Yet despite having so much going against it, “The Conjuring 2” entertained me. It’s stunning how Wan managed to replicate some of the interview footage of the real life incident- which is hard to take seriously as the girls look like they’re trying not to laugh (it’s obviously a hoax)- and make it creepy.

Violence: Rated R, although the moments of violence are brief.

Overall: “The Conjuring 2” is a good, worthy sequel, even if it’s a bit too similar to the original.