(Written by…everyone and their Mothers) 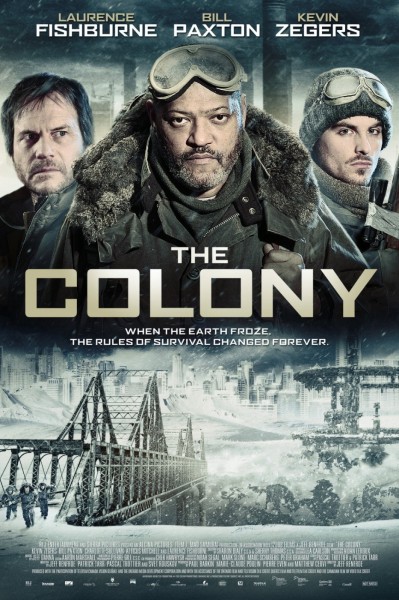 Plot: When a new ice age destroys civilization, the survivors are forced to live within underground colonies. Disease is the biggest threat to humanity now, but when a colony cuts off all communications, it’s up to the leader Briggs (Laurence Fisburne) and protagonist Sam (Kevin Zegers) to investigate. What they discover is a far bigger threat than any disease.

Whenever I’d hear about “The Colony” during its production, people would always talk about how it was low budgeted and Canadian…even though it’s not THAT low budgeted or THAT Canadian…I’m not entirely what that last part means either…Apparently Canada wanted to punch Hollywood in the face by delivering a product that had all the flash, spectacle and star power which could be found in a Hollywood blockbuster, but at a fraction of the cost. Unfortunately, it appears someone didn’t have faith in their own project because when a film has FOUR writers, that usually means either creative differences, on-set rewrites or the initial draft requiring lots of patching up. It’s not always the kiss of death in terms of quality, but usually these behind-the-scenes issues show up on screen. There are always going to be remnants of discarded subplots, conflicting characterizations and the feeling that multiple movies have been forced into one. “The Colony“, tragically, is one of those movies where it’s obvious each of the writers had a different story to tell. Or maybe I’m wrong and some katana wielding, studio suit came in and hacked much of the scripts content into pieces. It is a mess, but why would I consider that to be tragic? Because when it came to visuals, tension and atmosphere, “The Colony” grabbed me by the balls and squeezed until they burst…erm, for some reason, that is considered a good thing. I really liked what this movie did right, which makes its failures that much more devastating.

“The Thing“, “30 Days of Night“, “The Road Warrior“…I have absolutely no reason to list any of these films, but every reviewer seems to do so and I consider myself to be every reviewer. Each movies presents a bleak, desolate world where survival can only be achieved using morally ambiguous methods. It takes place in the arctic snow as well, a location I am thoroughly fond of. CGI, Green screens and Matte paintings are used to bring this snowy world to life and I thought they usually looked convincing. There’s a lot of detail in the various sets, from the exteriors of the colonies to the weather satellites to the dilapidated bridge. The interiors look authentic because..,they were! “The Colony” was shot at an actual underground base, which looks spooky but also habitable (a difficult balance to achieve). The director loves to use his wide shots, capturing the beauty of the locations while also using ambiance and unsettling music to make them menacing. The ‘slow push’ camera work provided plenty of chills and the lighting delivered the right sense of dread. The build up is…freaking amazing. Seriously, I was shuddering throughout a lot of the first half, wondering what sort of unseen menace lurked in the shadows. Now let’s take a break and discuss the story, before I ultimately return to the direction. 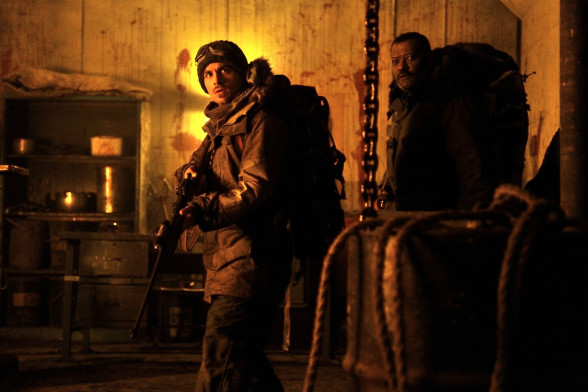 Now you’ve already heard my theories regarding the script, whether it suffered from too many writers with conflicting visions or executive meddling, but I think the best way to critique the story is by spelling it out fully. This paragraph will contain a spoiler as to what the villain ultimately is- the movie shows us around the half way point- but I feel it’s necessary on a critical level and on a personal level, because my feelings of disappointment would’ve been minimized if I knew what to expect. In the future, mankind developed machines to combat global warming, but it backfired and created another ice age. The morals of humanity began to die along with the actual dead, so people split up into various colonies. Unfortunately, disease has become significantly deadlier, so if you show any signs of sickness you will be quarantined. If you don’t get better, you’re either exiled or shot. Mason (Bill Paxton) has become rather trigger happy, drawing the ire of Sam (Kevin Zeger), but is protected due to his past connections with Briggs (Laurence Fishburne)- their leader. Sam is haunted by his past, where he lost his family in a storm, but has found love with Kai (Charlotte Sullivan). When Colony 5 sends a distress signal out but promptly goes silent, Briggs takes Sam and Victim fodder- I mean…crap, I forgot his name…Victim Fodder…to investigate. When they arrive, a lone survivor tells them they received a transmission from a colony who got the machine to work and made an area free of snow. But when they searched, they couldn’t find them and brought something else back instead. After much searching, they discover who the culprit is…cannibals…So much build up only to lead to such a boring revelation. When they return, they not only have to fend off the cannibals, but Mason has decided he wants to be in charge…This is a lot of material right?

That is all crammed within a 95 minute long movie. Somehow, despite being so short and having that much material, the pacing is veeeeery lethargic in areas. Why do the lovebirds get two tender scenes when their relationship has no bearing on the story? Why do characters have back-stories spelled out for us, when it has nothing to do with their development? Sam has dreams of his past, yet it doesn’t tie in at all with his character arc. In fact, I’m not even sure what his character arc was! What was with Mason? He’s an asshole who does stupid things in order to drive the story. Yet were we supposed to like him during the end? Even the whole disease subplot is forgotten once the cannibals show up and the change of ‘power’ only leads to a single, underwhelming scene. The overarching theme seems to be what people will do to survive, but even that is inconsistent. Mason is treated as a villain for his ruthlessness, but does the ending imply that Sam is going down that same path? He throws Mason’s words back at his face during a pivotal moment (which is supposed to be cool) and says survival is all that matters…Yet Mason and the cannibals were doing everything they did for survival too. This could’ve been interesting, but I never felt like Sam’s morals were being challenged. Also, how did so many cannibals survive in the wilderness for so long? How can footprints remain during a blizzard? I guess those were plot holes, but I felt like the writers just had differing opinions as to where they wanted their characters to go and the director just didn’t seem to understand the script. There’s just too much wasted material, which is unforgivable for a 905minute long movie. The second half of the film more-or-less just ignores the first. 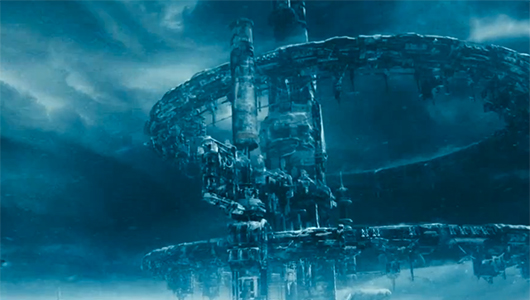 But I also can’t deny that even if the second half is both disjointed and inferior to the first half, I did still enjoy it. The kills are visceral, the chase scenes are intense, the fights are entertaining and the situations characters would find themselves in were engaging. “The Colony” might’ve been a trainwreck on paper, but the director was always able to keep me invested. I also thought the acting was good, even if Paxton was wasted in such a limited role. Laurence Fishburne does the best, delivering a classy performance which deserves to be in a better movie. Everyone else do the best they can with such dull characters. If I were to call “The Colony” ‘good’, I would be setting you up for disappointment. If I were to call it bad, I would be setting you up for a pleasant surprise. The truth is somewhere in between. Maybe there was once a great movie here, but post production tampering robbed it of its quality. Maybe each of the writers all had good stories to tell, they just mistakenly put them together, cramping the content in the process. I don’t know, but every once in awhile the script will show a flash of inspiration. Furthermore, I really dug the direction and cinematography. It’s a cesspool of good and bad. Enjoying it comes down to what captures your attention more- the good or the bad? For me, I think the good barely won out, but the bad made it a Pyrrhic victory.

Overall: “The Colony” might be a confused mess, but it’s an attractive confused mess. Amazingly, its fear tactics worked on me. I think it’s worth watching, but keep expectations low.