A group of friends are vacationing in Europe when the reckless Paul (Jonathan Sadowski) suggests they go visit the ghost city of Prypiat, which was abandoned when the Chernobyl nuclear reactor vaporized and contaminated the city with radiation. While still uninhabitable, the radiation levels have gone down enough so tourists can make short visits to the city. Our protagonists happen to be one of these tourists, but soon find themselves stranded and hunted by…something.

In retrospect, “Chernobyl Diaries” was ripe with warning signs. It’s bizarre- albeit kind of funny- that Oren Peli (director of “Paranormal Activity”) would hire writers known for their work on Asylum productions (including “Paranormal Entity”, a rip-off of Peli’s movie). Wariness turned into dread when the movie wasn’t screened for critics and dread turned into despair when the people who ultimately did review it, hated it. Once again, I find myself feeling all alone in my support of the movie. With that said, “Chernobyl Diaries” was one of the most frustrating experiences of 2012. It’s ALMOST a good movie. SOOO CLOSE!

One of the big criticisms leveled at the film was its characters. Honestly, that didn’t bug me as much. Sure, they had the tendency to be moronic jerks, but the movie’s just trying to make them human. I respect that characters could be heroic one moment, quivering the next. I appreciated that it was difficult to tell who the primary protagonist was. I liked that the disposable characters turned out to be useful. It’s also helpful that the actors generally did a good job, although Jesse McCartney (Chris) felt miscast. “Chernobyl Diaries” isn’t going to win any awards for characterizations, but I wasn’t rooting against the characters either. 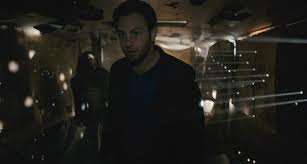 In fact, I liked about 80% of this movie. It had a slick premise that makes excellent use of its grim and ambitious setting, which is even more impressive when you consider that the movie only cost $1,000,000 to make. I thought Bradley did a spectacular job when it came to using the background, allowing for plenty of shadowy figures to suddenly dart across the screen without drawing too much attention to itself. He did an effective job building suspense, but what I loved the most was that I honestly wasn’t sure what kind of movie I was watching. I expected a typical ghost film, but when the horror begins, I couldn’t tell what was menacing them. This movie was at its most effective when it was allowing us to use our imagination as to what was going on. I was constantly on the edge of my seat, wondering where the hell it would go.

Then they royally fucked it up.

Bad endings can sink any horror movie, but “Chernobyl Diaries” has to have one of the worst endings of all time. It’s not like “The Last Exorcism”, where the ending felt out-of-place with the rest of the movie. Nor is it like “The Devil Inside”, where instead of an ending, it just stops. Perhaps it would’ve been better if it did. Instead, “Chernobyl Diaries” reveals it’s twist and it works as a domino effect, ruining the rest of the movie. It makes no sense, leaving a slew of gaping plot holes in its wake. It directly makes us recall some effective sequences, but in a negative light because it’s so nonsensical. I thought the movie was leading to something awesome. Instead, it backfires and makes all of the previous awesomeness seem void. I have NEVER BEEN SO ANGRY WITH A FINAL TWIST IN MY LIFE! It’s just…stupid! It’s also frustrating because I can’t go into detail without spoiling. I honestly wonder if they hadn’t finished writing the ending before going into production, because everything about it screams ‘last minute’.

That is the tragedy of “Chernobyl Diaries”. It was at the absolute least, a good movie that was working its magic on me. I bought into the fear tactics. I was continuously biting my nails while marveling at how different it was for a horror film. I respected how well made it was considering its limited resources. The cinematography was moody and the direction was sharp. I was having a blast with it. But the ending raped it. Immediately I was assailed by plot holes and cliches. Perhaps worst, the apparent creativity was a sham and I realized that this was like every other horror movie ever made. Ugh, it’s like making out with a fine woman but just as things are about to get sexier, she leans over and whispers in your ear: “I am a dude“. That is “Chernobyl Diaries“! AAAAH!

Oh yeah, where was the diaries?

Violence: Rated R, but there are way too many off-screen deaths.

Overall: I liked “Chernobyl Diaries” on a ¾ star level until the ‘twist’ was revealed, in which it was cut down by a full star. I’d recommend it to horror fans, but probably as a rental.