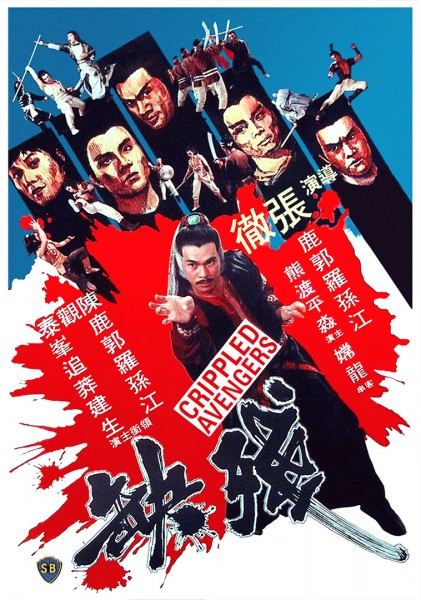 Plot: A Master (Kuan Tai Chen) goes down a dark path when his son loses his arms as a child. He has them replaced with metal limbs and raises him to be a vicious warrior (now played by Feng Lu). They cripple four men- either physically or mentally- for petty slights, but their victims learn kung fu and convert their disabilities into strengths…and they want vengeance. Also known as “Can que“, “Mortal Combat” and “Return of the 5 Deadly Venoms“.

After being blown away by the super cool “Five Deadly Venoms“, I struck a kung fu pose when I learned that there was a sequel! I challenged my netflix account and demanded that it produce this followup if I was victorious in my duel. I thought I was the winner, as it arrived and the opening credits identified the movie as “Return of the Five Deadly Venoms“…I was very confused since it felt more like it was a sequel to “Crippled Avengers” than “Five Deadly Venoms“, but when the flick ended and I began to do research, I discovered that this was…GASP….”Crippled Avengers” disguised as a sequel to “Five Deadly Venoms“. Clearly netflix landed one of those death touches during my fight, which wouldn’t go into effect until I had already tasted the rewards of my conquest…You win this time, netflix…This time…Now you might be thinking how I did not notice this early on and I shall fill that hole for you: I’ve never seen “Crippled Avengers” until now. Yet I knew enough about that somewhat infamous kung fusploitation feature to indirectly recognize it. “Crippled Avengers” is unusual because its reputation expands beyond being a quirky kung fu flick starring the Venom Mob. Its influence extend into other genres and the goofiness has lead some viewers to erroneously claim that it’s a ‘so bad, it’s good’ chop socky flick. The majority of these viewers are not really fans of the genre, but find themselves having a blast making fun of it. The core concept is campy enough that the idea of legless, armless, blind and deaf people fighting almost overshadows its exceptional martial arts choreography. I find it interesting how two different audiences come to two very different conclusions about the same movie, but at least it has found an audience…as both a good and a bad movie…apparently.

“Crippled Avengers” is…strange. For me, there is something about it which makes it easy to laugh at…But I always was invested in the drama. Furthermore, the choreography is undeniably some of the Venom Mobs best work.I sometimes complain that the Venom Mob’s style of choreography feels outdated compared to what Jackie Chan and Jet Li have done, but I thought “Crippled Avengers” excelled in the fighting department. The first half features very little action, focusing on the situation, the characters and the training. I wasn’t bored, as the characters were colorful enough to keep me interested and the campy dialogue fit the absurdness of the situation very well. Whereas “The One-Armed Swordsman” took its premise very seriously and was able to deliver a heart wrenching, somewhat realistic, drama surrounding such an injury, “Crippled Avengers” is a cheesy kung fu flick at its core. When a character gets his arms or legs lopped off, they just have to get them replaced by steam punk-ish metal limbs and suddenly they are indestructible. If a character loses their eyesight, they just have to be told to use their ears and suddenly they have Zatoichi-esque sensory abilities.

It’s hard to take this seriously, even though “Crippled Avengers” isn’t playing up the situation for laughs. That makes it goofier, but it works and I never thought it was unintentionally hilarious to the point where I felt nothing. It can be pretty sad when bad things happen to our heroes, but it’s overplayed to the point where it won’t likely depress you. Yet when they overcome their weaknesses, it’s hard not to cheer in triumph. I found it odd that the villains had the most compelling character arcs, as they do share a tragic back-story. If I can criticize the script for anything, it’s that the protagonists don’t really develop in comparison and by the end of the movie, the villains have also become rather one-dimensional. These characters are fun because of what they do, not who they are…Case in point, two characters are seen holding hands so much that one has to question their sexuality. I don’t believe that was the intent, but it put a smile on my face. I love dem gay dudes, but I can’t remember which two characters they were- because there wasn’t a lot to their personalities. I think it was the blind and deaf guy, but I’m only recalling based on their handicaps. Still, their actions, reactions and mannerisms entertained me, which is what matters. The situations and dialogue are pretty amusing in general. For example, one villain kept stopping his fights and leaving whenever he started to lose. Every time this happens, he says “Let’s go” with the straightest of faces. There’s nothing funny about it during the first time, but hearing it over and over makes that character far more entertaining than he usually would be.

But during the second half, “Crippled Avengers” delivers one fight scene after another…and they’re awesome. The choreography is designed to show off how athletic the performers are, with all sorts of flipping around and jumping through rings (cool spot). With this old fashioned style of kung fu, it’s easy for it to seem staged compared to what martial arts stars can do now. But I thought the reactions were all very smooth and natural, so you’ll have a character dodging an attack, landing in a sitting position and countering with a kick before sliding away in one single move. I was surprised at how graceful all the techniques were, with my favorite performer being the blind dude. Everything he did looked really cool, although the idiot had some awesome moments as well. There is a nice balance between hand-to-hand combat and weapon duels, but “Crippled Avengers” is sure to utilize the gimmicks to their fullest. Having metal arms or legs, no eyes, ears or mind really play a part in the battles, never disrupting the flow. When the villains start taking measures to counter the heroes new-found strengths, such as playing the drums to disorient the blind guy or using mirrors to blind the deaf guy, it adds a whole new depth to the action.It adds to the drama, the intensity and even the suspense! Not bad for a ‘camp classic’.

“Crippled Avengers” is a lot of fun and while I disagree with the camp who claims that it’s ‘so bad, it’s good’, I am glad that it has a bigger audience for that belief. It definitely is easy to laugh at, although in traditional Hong Kong fashion, the actual attempts at comedy are usually too broad. But it never spoiled the flick and even the unintentional humor never took me out of the story. The choreography is excellent, the gimmicks were bizarre and were sewn seamlessly into the choreography while never being forgotten. You never forget that the guy with iron legs has iron legs thanks to the sound design and his movements, but they never slow down his fight scenes either. Good, bad, “Crippled Avengers” is a fun time and can be enjoyed on multiple levels.

Nudity: None. There’s not even a real female presence!

Overall: “Crippled Avengers” is a positive example of the ‘cheesy kung fu flick’, producing cool fight scenes while being campy enough to enjoy ironically. But enough emotion is shown that you can become invested in the drama as well.