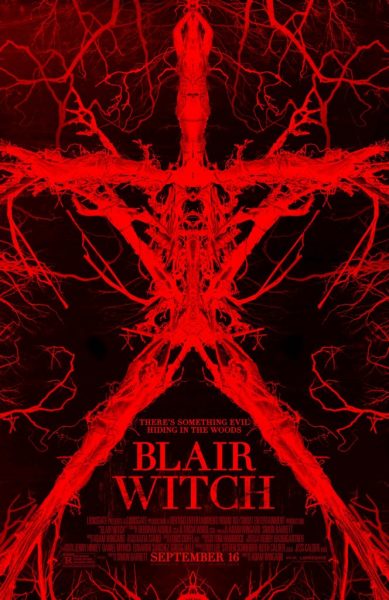 Plot: Years after Heather and her friends mysteriously vanished in the Burkittsville woods while investigating the Blair Witch legend, her brother James (James Allen McCune) mounts his own search for her after seeing a clip that might glimpse into her fate. But then he and his companions get lost…and then strange things start to happen…

I thought “Blair Witch” was a pretty good horror movie that shares an interesting relationship with its predecessor, the highly controversial phenomenon known as “The Blair Witch Project“. Back in the 1999, the majority of audiences were terrified of the movie, but a discord has steadily grown over the years and now fans and haters debate fiercely over the films’ quality. This sequel is unusual in that it feels like filmmakers paid close attention to both sides of the argument, as “Blair Witch” wants to satisfy everyone- although based on the reception, it may have alienated everyone instead. One of the most prominent criticisms is that it rehashes the narrative of the original, but while the new batch of protagonists experience the same things chronicled in “The Blair Witch Project“, it’s mostly comprised of new content. There are a lot more set pieces and situations, with even the familiar material being expanded upon. Yes, the bundles of rocks, the weird stick figures, the mysterious nocturnal noises and Rustin Parr’s house all return, but those make up for a small portion of the film. The mythology of the Blair Witch is expanded upon, some loose ends are tightened and we even get to see explicit evidence of the supernatural (great designs and special effects!). Even though they’re re-using the ‘found footage’ gimmick, the filmmakers are obviously having a blast with the updated technology. There are drones, GPS ear-pieces, reverse screens and hand held cameras to give us many different perspectives and while I felt the drone could’ve been used more effectively, these additions allowed me to forgive the rather flimsy in-story justification for their presence. Lisa (Callie Hernandez) is making a documentary about this venture, which seems a little tasteless and exploitive considering that James (James Allen McCune) is her friend. To be fair, the script acknowledges this and unlike Heather, she’s much more tactful. She’ll occasionally film at inappropriate times, but she seems to realize this and stops, but her arc isn’t really explored, nor does it have any pay-off. But at least the advanced equipment allows the found footage angle to function without the audience asking why they’re still filming. All of these points can either be praises or criticisms depending on your point-of-view, as you might reject all forms of found footage, or you might be partial to this style but prefer the simplicity of the original. Maybe you find the updated gadgetry to be distracting. Perhaps you’ll be pleased that more is explained and seen, or you may feel that the story worked best when shrouded in complete ambiguity. Is it too similar to the first? Or is it too different from the first? This is the problem with trying to please everyone, as you simply just can’t please everyone. Personally- I feel like sequels should expand and escalate, so I was content with these decisions by the filmmakers, even though I understand the counterpoints…

I’m convinced that the writer had the complaints directed against the characterizations of “The Blair Witch Project” in mind when developing the new protagonists, as they seemed designed to win over the detractors. The bulk of the screen-time surrounding the previous cast was dedicated to them being confrontational, noisy, whiny and even idiotic. But this new group of characters have much warmer interactions, making their personalities a lot easier to endure. When there are confrontations, they make sense considering the context of the scene. Furthermore, they usually make reasonable and intelligent decisions. I loved how when confronted with signs that something strange is going on, their immediate response is “OK, we’re done. Let’s get the f@ck out of here“. On the flip side, they feel much more like movie characters than real people. This is especially apparent whenever they say or do something funny, as their comedic timing is too good. The reason why “The Blair Witch Project” was so successful is it felt authentic and the cast seemed so real, warts and all. You might not have liked them, but I think their reactions to the situation were realistic, which heightened the tension (for fans). I never made that kind of connection with this cast, even though their acting is fine and I wasn’t rooting for their deaths. Of course, I attribute this issue to “Blair Witch” undergoing a formal production, complete with a script, cinematographer, budget, sets, special effects and a credible director. Its micro-budgeted predecessor was infamous for being completely improvised, where the actors were put through real stress and had no idea what to expect. “Blair Witch” might be presented as found footage, but it is a conventional movie that isn’t striving for authenticity like the first one did. Is this a good or bad thing? It depends on what you want out of this. Because they have more time and money to use, the Blair Witch herself is a lot more aggressive this time around and she’s making her presence known almost immediately. While not necessarily a fast paced film, it does move a lot more quickly and leaves very little to the imagination. For those who found “The Blair Witch Project” to be boring and uneventful, you will prefer this for offering a lot more carnage. But you also might still find it to be too slow for your tastes. For those who found “The Blair Witch Project” to be unnerving and spooky, you might consider this to be dumbed down and significantly less atmospheric. Once again- I agreed with how the filmmakers approached this sequel, as “The Blair Witch Project” arguably began the ‘found footage’ formula, which has grown stale over the years. I’d rather the Blair Witch not follow the path of the “Paranormal Activity” franchise, where each movie moved at a crawl, progressing the overarching story one-inch at a time. As I said, sequels should escalate and expand, so I was thrilled when the Blair Witch started showing off her powers without restraint around the half-way point.

Director Adam Wingard crafts plenty of great scares, but I felt they lacked structure. The underground tunnel really preys upon our claustrophobia, which is great, but why was it there? It doesn’t lead anywhere! There is some body horror where a character pulls out ‘something’ from their foot, but what was that? They really built this subplot up, only for it to end in the most anti-climactic fashion imaginable. Believe it or not, every spooky aspect of “The Blair Witch Project” given proper foreshadowing and pay-offs, with even the childrens’ distant voices tying into the grisly back-story. Here, the filmmakers conceived plenty of creepy ideas, but they almost feel like filler because they’re so random. I also thought there were too many traditional jump scares during the first half, where someone would just pop into frame as if they were waiting for the right moment to startle everyone. I jolted the first few times, but as these ‘jumps’ are all the same, my mind adjusted and they lost all of their power. The sound design was amazing though, being a jacked up version of what we got in the original- which was creepy enough. I loved how the spooky noises should seemingly surround the characters/audience, always popping in our ears at different volumes. They made me jump a lot more than the so called ‘jump scares’. The most terrifying part- for me- was when we start to hear thunderous footsteps. My imagination went wild, but for once, I was not disappointed by the reveal of this…being…I thought the build up was solid and the set pieces were cool. The finale left me with very mixed feelings though, which is strange because it’s been mostly well received. On one hand, it provided a lot of nail biting excitement. On the other, it almost seemed over-produced to where the visual style started to resemble a video game. The lighting, set design and the pop-up spectres were just a bit too flashy for the established tone, even though they work on their own. Was it just me or did the house become a lot bigger between the two movies? Whereas the equivalent in the first film felt like the real, dilapidated home of a psychopath, this felt more like a haunted house attraction. The camerawork is surprisingly stable throughout the bulk of the film and the cinematography can even be quite gorgeous, although the traditional shaky hand-held returns during the third act. So for those who suffer from motion sickness, you’ll certainly prefer the more polished look of the film…although it is at the cost of the gritty realism of “The Blair Witch Project“. Nevertheless, I thought Wingard had a strong balance of creepy background imagery, suspenseful build-up and intense confrontations with the supernatural. There are so many good moments that I found myself wondering why he had to sporadically fall back on cliched scare tactics, but I’m willing to endure ten ‘how did this person sneak up on you’ facepalms if it means I get one genuine scare- and I ended up getting plenty! I liked “Blair Witch“, but I don’t think I’m going to remember it as much as its predecessor. I was entertained by it, with even the scares contributing to a sense of fun, but “The Blair Witch Project” haunted me for hours after it had left my DVD player. It was almost unpleasantly scary, but this sequel is probably more accessible to general audiences. “Blair Witch” will not inspire as much passion as its predecessor did, whether we’re talking love or hate. Detractors of the first won’t find this to be as boring and fans of the first won’t find this to be as terrifying, but I think it found a solid middle ground. Bring on more sequels! Oh, I’ve intentionally snubbed “The Book of Shadows: Blair Witch 2” from this review because it’s not really a sequel and I barely remember it.

Overall: “Blair Witch” is a good found footage horror movie that tries to appeal to both fans and detractors of “The Blair Witch Project“, although whether or not it’s successful depends on your tastes. I liked it.