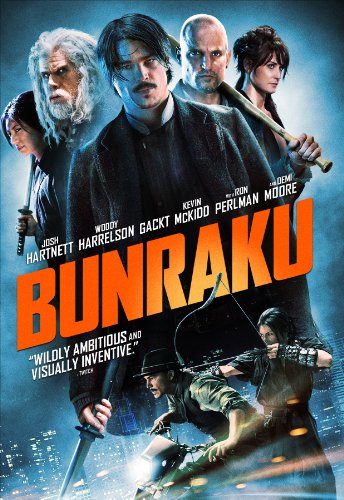 Plot: Nuclear Warfare has left the world in shambles, but humanity picks up the pieces by banning firearms. But eventually the streets becoming corrupt, filled with gangsters, assassins and their victims. Nicola (Ron Perlman) and his gang of nine warriors has dominated the innocent and bought out the law. The only way to stop him is defeating him in hand-to-hand combat. Enter two strangers, a drifter (Josh Hartnett) and Yoshi (Gackt), a cowboy without a gun and a samurai without a sword. Both have different vendettas against Nicola, but realize that they need each-other to bring him down at last.

“Bunraku” isn’t a great movie. In fact, I’m not even sure if it fits my definition of ‘good’. But I felt like applauding it when the end credits began to roll. Cinema has become a wasteland, devoid of creativity and talent. Because movies cost so much to make these days, studios now have embraced the low risk system of producing films that can’t fail (except they do). Filmmakers like Michael Bay have forsaken artistic integrity for the sake of being businessmen, choosing projects that guarantee money but nothing more. So it is refreshing when a movie like “Bunraku” wanders into town, boasting a big cast despite its meager budget. It’s stylish, unique and pushes the boundaries of conventional storytelling. It is truly an avant-garde action film.

Or it’s a self indulgent, overbearing, convoluted mess that needed to stop sniffing it’s own ass because the fumes were clearly effecting it’s better judgment. I guess that depends on you.

Ugh, describing this movies style is going to be a bitch, but it also determines whether or not you’re going to like this movie. I suppose I can cop-out and just say that it’s like “Sin City”, but is that true? That movie was almost purely digital, which “Bunraku” is not. Other films that come to mind include “Sucker Punch”, “Speed Racer”, “The Spirit”, “Scott Pilgrim Vs the World” and “Give ’em Hell Malone!”, the latter perhaps matching this the most in tone. But explaining this is difficult, as the film blends so many different cultures and styles. The sets are often practical, but have this abstract, expressionistic look about them. They are clearly artificial, but the movie seems to revel in the fake-ness about them. Some transitions are executed by having the scene open up as if it were a live action pop up book. Other scenes are framed like panels of a comic book, with even the subtitles being presented as how you would see them in a comic. There is a lot of CGI and even a scene of cel animation. But what makes the film so visually striking is the balancing and contrasting of practical and post production effects. It provides a very strange aesthetic. The colors are bright and vivid and the sets become more and more bizarre as the movie moves forward. Whether you enjoy it or not, there’s no denying that this is one of the most unique looking films out there. 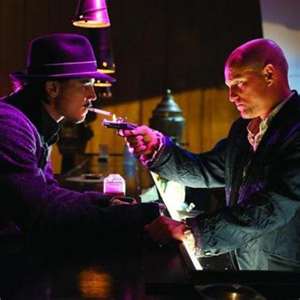 Matching the films baffling visuals is its camerawork, editing, score, and tone. The camera constantly seems like its moving and it’s cut in a way so that scenes bleed in together, sometimes even overlapping over each-other. A character telephones someone and they almost appear to be seeing each-other while they talk, even though they are in different locations. The score is more akin to that 60’s “Batman” TV show and honestly, I’m surprised that no “Wham!” or “Pow!” captions came up. It might be too heavy handed for some, but it certainly stands out. The tone is gleefully taken from film noir, with a highly stylized narration continuously describing the characters actions and feelings. Every piece of dialogue seems like it was written as the best line delivered in history. It’s both cool and corny. The script is just as over-the-top as the directors vision of it.

The fight scenes are pretty well choreographed, but they rely more on camerawork and editing than actual choreography. Some of the fights are just bizarre (I’m probably using that word a lot here). The opening battle is between Killer #2 (Kevin McKidd) and a group of nobodies and what does the fight resemble? A musical number, except instead of singing there is bloodshed. Yoshi’s abilities are drawn from eastern martial arts (Sword fighting, grappling, etc) while the Drifter’s skills are more western (boxing with some MMA stuff). To make things even more diverse, each of the 9 Killers have their own styles. Sometimes the battles take place in the most weird circumstances, like the Drifter and an enemy fighting on a…Tight rope net? Which bounces like a trampoline? Odd! The action is plentiful and there are many different kinds of fights: one-against-one, one-against-many, many-against-many, weapon fights, hand-to-hand fights and some fights are shocking in their simplicity while many others are so hyper stylized (another word I’m probably using a lot) to the point of becoming overcomplicated. The combat sequences aren’t great, but they don’t have to be. This is still some stellar work, considering it’s a western movie. 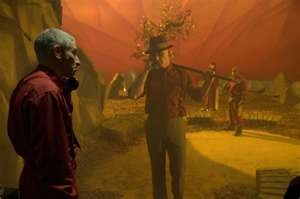 The cast is pretty epic considering the films modest budget. Besides Hartnett, Perlman and Gackt (who is big in Japan, apparently), we also have Woody Harrelson (the Bartender), Kevin McKidd (Killer #2), Demi Moore (Alexandra) and Mike Patton who is perfect as the narrator. Josh Hartnett might’ve been a fad in terms of popularity, but he’s surprisingly badass here. He works perfectly! Gackt, whose name makes me cackle, gets to be the stoic guy while also getting to emote more than his cowboy companion. Pretty good considering English is obviously his second language. Kevin McKidd, like the movie he’s involved in, is someone you’ll either like or hate. Sometimes he worked, other times he didn’t. Woody Harrelson delivers the same kind of performance that he usually does. Ron Perlman is cool as always, but he doesn’t have much to do other than to look tough, but act bored. He’s played this kind of part before. Demi Moore is not only wasted, but her acting is surprisingly ‘off’. This may have been during a time when life was getting hard on her, but she also didn’t have too much to work with. Like the rest of the movie, the acting can be over-the-top, but I thought it was more restrained than most of these kinds of films (like “Sin City”).

You might have noticed that I’ve been fairly neutral when describing “Bunraku”. This is because like the movies I compared it too, you will either appreciate its style or you won’t. You might think it’s innovative and cool, or you will think it’s silly. Personally, I guess I lean more towards the former, albeit guardedly. Usually, I don’t like these movies that seem designed to show off how inventive a director is (why I disliked most of the movies I compared it to earlier), but “Bunraku” seemed to work for me more than not. That’s not to say that it isn’t without faults. The movie just was too long and some of the subplots are utterly useless (like with Alexandre, Moore’s character). It bloats the film and shakens its foundations, making it nearly collapse on its own weight. Furthermore, by the end of the film, the fatigue was showing when Ron Perlman’s villainous speech seemed to go on FOREVER. But even when I didn’t appreciate the style, I could at least respect it. Plus, the nonstop action kept me interested even when the story didn’t. So I like “Bunraku”, even if it’s not the masterpiece it wants to be.

Violence: Rated R. It’s not THAT gruesome, but it is pretty grisly at times.

Nudity: None, although some dialogue suggests rape.

Overall: Watch the trailer for “Bunraku” and if it looks like something you’d enjoy, check it out. If not, don’t bother.