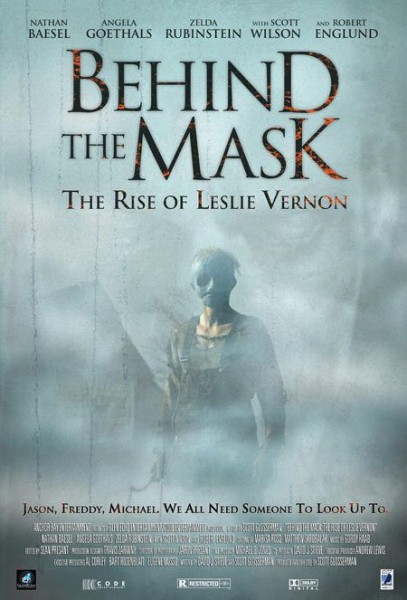 Plot: Taylor (Angela Goethals) is an ambitious journalist who’s filming a documentary on Leslie Vernon (Nathan Baesel), a man with intentions on becoming the next big, iconic, slasher. He shows them how he stalks his prey, plans their demises and carries the murders out. Did I mention this was a comedy?

I popped “Behind the Mask: The Rise of Leslie Vernon” into my DVD player, not really knowing what to expect. I knew it was a slasher that followed a killer, but that was all. From the opening two minutes, my eyes were already popping out of my head in shock. In this world, Jason Voorhees (“Friday the 13th Part 2”, did you think I was going to mess that up?), Michael Myers (“Halloween”), Freddy Kruger (“A Nightmare On Elm Street”) and Chucky (“Childs Play“) all exist, presumably along with the rest of our beloved horror icons. But apparently their legacy has exagerated the truth. They aren’t undead, they just use bullet proof vests, fire retardant chemicals and rig the locations in their favor. It’s a very elaborate process, but make no mistake, they still kill people. Before I could force my eyes back in my skull, they introduce us to Leslie (Nathan Baesel) and my brain exploded. He’s not what you expect out of a serial slasher. He’s friendly, flamboyant- if a little effeminite- and highly enthusiastic about his own work. Watching him go through training methods (cardio is important for catching victims), sabotage the settings and interact with other friendly serial killers is hilarious.

But what makes “Behind the Mask” so effective isn’t just that it’s funny, it’s also really creative. “Scream” had a similar self aware attitude about itself, but I felt they took it too far. I can’t stand “This is just like a horror movie” lines of dialogue and its flaunting got a little old. “Behind the Mask: The Rise of Leslie Vernon” isn’t overtly funny, being more deadpan than anything. It let’s the jokes tell themselves. One of my favorite scenes is when Taylor asks “wouldn’t they just break through a window?” and Leslie seems just as dumbfounded. He responds with something like, “You’d think, right? But they never do and if they break a window, it will be on the second story. That just leads to the roof and then they’re screwed”. What’s awesome about this is it’s the kind of shit that does happen in slasher films. If the characters break a window, it’s always on the second or third floor. This movie is perfectly aware of the conventions and cliches that come with the genre, but in its world, that is common human behavior. This could’ve backfired and caused the film to collapse on its own weight (and for many, I presume it did), but I liked how genuine it seemed about itself. I totally bought into it, thanks to the sincere performances from the actors. I struggled with accepting Baesel only because he seemed too small, but his charisma won me over. 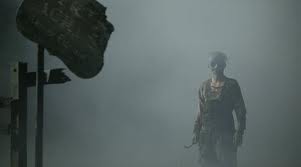 I also liked how Leslie explains the Freudian theories behind slashers, such as how the weapons are phallus symbols. I’ve always thought that was a load of horse shit and anyone who attempts to psychoanalyze these types of movies are wasting their time, but it works here. Once again, I love how they aren’t making a joke out of all this, but it ends up being funny anyway. The majority of the feature is shot as a documentary, but it dispenses with that gimmick near the 3rd act so it may become the slasher it has been deconstructing. It provides a nice pay-off, showcasing good suspense and atmosphere, but the lack of gore bugged me. Sometimes I couldn’t even tell if a character had died because they cut away so quickly. Come on, this is 2006, the time of torture porn. I’d expect this in the 90’s, but not here! Luckily, I was still at the edge of my seat and the script doesn’t lose its wit. I loved watching the more intelligent characters trying to herd the moronic victim fodder. That’s just golden.

But as a whole, I found “Behind the Mask: The Rise of Leslie Vernon” to be incredibly entertaining. Its deadpan sense of humor was side splitting, making me laugh more than most of those “Scary Movie” films combined. Yet it could also be intense and exciting. There are plenty of homages and references, but they’re used in a clever way. They are part of the story. You also can’t go wrong with a cast that includes Robert Englund, Scott Wilson and even Kane Hodder in a brief cameo. The filmmakers were clearly fanboys, but unlike most fanboys, they have actual talent. This was just an all around engaging experience and I loved every minute of it.

Violence: Rated R. Besides one scene, there isn’t much.

Nudity: There are some breasts, sex and panty shots.

Overall: “Behind the Mask: The Rise of Leslie Vernon” cracked me up and actually made me ‘think’ about my beloved genre. Well done, movie. Well done.