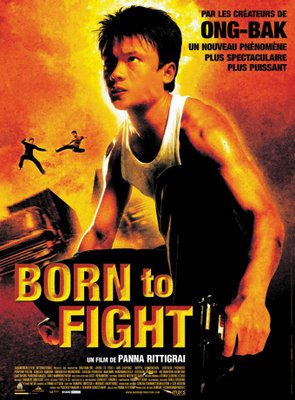 Plot: A young cop named Deaw (Dan Chupong) catches a notorious Drug Lord, but his mentor is killed in the process. Distraught, he decides to accompany his sister on a good will trip to a remote village along with other athletes. Everything goes fine until a terrorist group takes the village hostage. It turns out that they work for the drug lord and are demanding that he be released.

Panna Rittikrai made “Born to Fight” immediately after the success of “Ong Bak”, one of the most lauded martial arts features of all time. It introduced the world to a new kind of cinematic martial art, which showed off bone crunching techniques and brutal stunts. Unfortunately everyone attributed its success to the star of the feature, Tony Jaa, even though he deserves a lot of the credit too. But I suppose that makes sense, as few people bother even remembering who choreographed these films. Before becoming relevant, Rittikrai was a director of B-movies, but none of them ever caught the public eye before “Ong Bak“. I have only seen “Spirited Killer“, which is only worth mentioning because Tony Jaa appears in an extended cameo and it’s the only watchable scene in the whole damn movie. When his directing career ran out of energy, he turned to action choreography and not long afterwards, “Ong Bak” was borne. Since then, he has co-directed (with Jaa) “Ong Bak 2” and “Ong Bak 3“, which were big deals even if the latter was pretty crummy. He continues to choreograph as well, continuing to collaborate with the director (Prachya Pinkaew) and actor (Tony Jaa) who helped make him famous. I am happy for his success, as he does sport talent as a filmmaker and a stunt coordinator, even if his movies tend to be far from perfect. “Born to Fight” is certainly a good example of a film being far from perfect, but it’s a shame that more people don’t know about it because the feature contains some of Rittikrai’s finest work.

“Born to Fight” opens with a gorgeous shot of the sunset and while the Mise-en-scène cinematography never retains that level of quality, this is a good looking film. It has nice locations and Rittikrai utilizes plenty of wide shots. He has a lot of sets to work with and he makes sure we see them in all their glory, but then we get to see them blown apart or crushed in all of their glory. Yet we don’t watch a movie like this for the visual style, we want to see some action! Well you can expect some of the most high octane, cringe inducing stunts that I’ve ever seen in a film. The opening action sequence in particular is stunning, as we see people knocked off of moving vehicles onto other moving vehicles before hitting the ground. It’s framed in a way where we see everything and it’s a wonder that no one died. I would be shocked if no stuntmen’s careers were ruined in the making of “Born to Fight“. Within the first 20 minutes, we even see a truck plow through a whole village in what I presume is a reference to “Police Story“. If that’s fake, then fake has never looked so real. Now that is an epic way to start your movie! 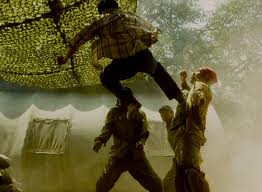 But then people start talking…

Part of the gimmick is that many of the actors are real Thai national athletes, which means that the term ‘actors’ must be used liberally. Before you point out that Tony Jaa was a martial artist before he became an ‘actor’, let me remind you that Jaa is a mediocre actor at best. We forgive his limitations in “Ong Bak” because he spends the bulk of that movie acting with his knees and his elbows. But I criticized “The Protector” and “Ong Bak 3” (he was a merely prop in the first sequel) for relying on his nonexistent dramatic chops way too much. The problem with “Born to Fight” is that it suddenly starts thinking that it’s ‘more’ than a simple action movie, which means it’s making the same mistakes. When they arrive at the village, everything is so happy and whimsical that it’s hard not to gag. When the bloodshed starts, we are forced to endure the directors bloated attempts at irony, such as when a kid sits down and starts praying to Buddha as people die all around him. Corny! The most mawkish scene in the movie is probably when a character starts waving a flag around the Thai flag (even using it as a weapon) or maybe it’s when they start chanting the Thai pledge aloud. These sequences are supposed to be tear jerking or inspiring, but they’re so heavy handed that they become silly. The less than impressive acting doesn’t help much either, although no one does terrible. What’s ironic is that its star, Dan Chupong, turned out to be very talented once he stepped out of Tony Jaa’s shadow. In fact, he’s probably the better actor of the two, but his character is so boring that it’s hard to see any of that. Granted, there wasn’t a whole lot for him to work with. The film has way too many characters and they are all shamefully underdeveloped. So if you get emotionally attached to anyone, it’s only because the villains are deliciously evil.

So the first twenty minutes rely on stunts, the next twenty minutes relies on drama and the following twenty minutes focuses on violent gun battles. Well, by ‘battles’ I really mean ‘massacres’. A lot of time is spent on these villains gunning down innocent villagers. It’s all good stuff, but the lack of martial arts action is noticeable. Thankfully, the final act makes up for it by delivering nonstop fights and stunts. The hand-to-hand fighting isn’t as impressive as “Ong Bak“, but it is still very good and there’s a lot of diversity thanks to the many different styles. It’s actually pretty absurd, but you’ll see the baddies getting owned by…gymnastics. Seriously, there are references to the balance beam, uneven bars and more! I don’t even need to mention how the athletes use soccer, rugby and kick volleyball for combat- except I just did. I can buy these sports being used to kick ass, but Taekwondo? Now you’re getting a little too far fetched (kidding). The Taekwondo actually looks the best on-screen, but don’t worry, we get plenty of Muy Thai as well. These fights are intermingled with gun battles and I love seeing the bullets bounce off of the dirt. The feeling that they’re barely missing their targets adds a lot to the intensity. But make no mistake, the real stars of this feature are the stuntmen who do the falls. Whether they’re taking hits, being knocked off of structures, vehicles, or being in a vehicle that’s driving through a structure, everything they do in this movie is amazing and all of them deserve credit for keeping “Born to Fight” enjoyable. You guys not only stole the show, you probably made it in the first place and I take off my hat in respect to your greatness. *kisses*

In the end, I think the difference between “Ong Bak” and “Born to Fight” is that “Ong Bak” works on more levels. It never tried to be anything more than a spectacular actioner and was consistently entertaining WHILE delivering its ground breaking martial choreography. “Born to Fight” has more impressive moments when it comes to production values- the sheer destruction is exceptional- or stuntwork – arguably the best I’ve ever seen- and it’s fight sequences might be in the same league as its predecessor, but it also has a few pretensions that make it hard to take seriously. The attempts at being dramatic are cheesy and it’s often hard to remember who everyone is. But if you can judge the movie for its action, I don’t see why you wouldn’t like it. I was impressed.

Violence: Rated R. It is quite grisly.

Overall: “Born to Fight” isn’t a great movie, but it does provide some great action and should be watched for that reason alone.