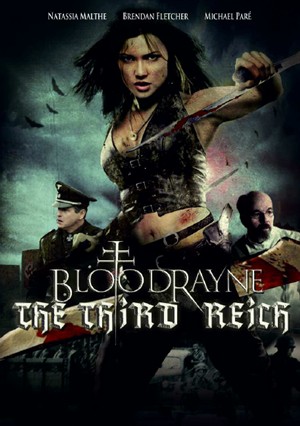 I’d like to think that after the (minor) successes of “Tunnel Rats” and “Rampage”, Uwe Boll decided it was time to go back to his roots. So he looked deep into his soul and pondered the attributes that made him so appealing to his audience and realized the one thing he had lost: All around incompetence. Therefore, “BloodRayne 3” is a throwback to his golden age. Actually, it’s more likely that his sudden surge of decent flicks was merely a fluke and Uwe was- and shall always be- a hack. But it doesn’t matter which it is, because those who put themselves through “BloodRayne 3” are cinematic masochists. I mean, did anyone think that a sequel to “BloodRayne”- One of Uwe’s worst movies- would’ve been any good?

Before I get into my review, let me have a good laugh. “BloodRayne” was a 2002 video game that was about a hot, half-vampire chick who killed Nazi’s. I’ve never played it, but for some strange reason, the first two BloodRayne films were set in completely different time periods (medieval and wild west). It took three “BloodRayne” movies before we actually got a reasonably faithful adaptation of its source material? Yikes. I mean granted, the only similarities include the setting and Rayne’s lesbian tendencies, but it’s a step closer I guess. While we’re on the “positives”- and yes, I am snickering while I use that word- let me say that the girl-on-girl action was pretty hot. It was the only scene where I wasn’t tempted to watch something else.

But where do I even begin with what “BloodRayne 3” does wrong? I mean, it’s hard to present an organized review when the subject in question does EVERYTHING badly. The plot is weak, but does anyone care about that at this point? It’s practically a staple of the franchise! Yet the screenwriter does provide some classic moments of awful writing. I especially love it when Rayne and a rebel find themselves captured and are being taken to their execution. They aren’t bound in any way, which you’d think would be especially important when one of the captives is a FREAKING HALF-VAMPIRE. I suspect that this was Uwe’s idea, so he could have a pointless sex scene (he’s done it before), but that doesn’t make it any less stupid. At least that made me chuckle, which means the sequence I just described was probably one of the better parts of the movie. Usually I was just frowning. Or crying. Or raging. Or peeing. So that chuckle was much needed. “BloodRayne 3” is very dialogue heavy and it doesn’t take a rocket critic to know where I’m going with this. The dialogue is…not very good. When it’s trying to be deep- whether it be philosophical or dramatic- it’s too silly to take seriously. When it’s trying be cool, It’s too phony. When it wants to be funny, it’s freaking annoying. Of course, whenever someone is trying to explain anything, it’s so cryptically incomprehensible that I often found myself confused.

The acting is bad and I’m not really sure if I should bother bringing this up. I mean, all of these movies somehow acquired decent casts, but everyone manages to suck anyway. I suspect that this is another staple of the franchise. Granted, Michael Pare and Clint Howard might not be as impressive as Ben Kingsley and Michael Madsen, but it’s something. Natassia Mathe (BloodRayne) is miscast in the titular role, which is strange because I don’t remember disliking her in the previous one. She struck me as too modern, which is ironic as the movie tries to present her as old fashioned. The highlights in her hair, her attitude, outfit and even the dialogue just didn’t work for her in this context. Acting wise, she doesn’t seem to be trying at all. “BloodRayne 3” does deserve praise for being the only film I’ve seen where Michael Pare looks openly ashamed to be part of it. I felt embarrassed for him. He put much more effort in “Maximum Conviction“, a direct-to-DVD Steven Seagal movie. Anyone who is familiar with the realm of Direct-to-DVD Steven Seagal should be shivering in terror right now. Clint Howard overacts like mad crazy, but he seems bored while doing so. Yet the supporting cast makes the key players look…slightly less awful than they are, with the second-in-command rebel probably deserving an anti-Oscar for his horrendous performance. Was he even an actor or just some dude Uwe hired off the street? I’ve never seen such a listless delivery in my life! The cast almost becomes amusing in their badness, but everyone seems so disinterested that I could never start enjoying myself on that level. 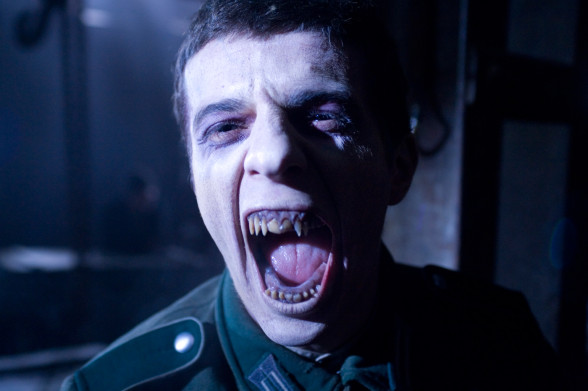 While watching this…masterpiece…I marveled at how inept Uwe’s direction was. Actually, this expands to just about all aspects of film-making. The camerawork is jittery and there is no effort in framing or staging any of the sequences. The editing is lazy. Some of the fade-outs made me think they were going to go to a commercial break, but sadly, they never did. Other times there will be NO transition. The scene will just abruptly cut to the next scene. This is especially glaring during the supposedly ‘scary’ moments, like when Pare attacks two men. Naturally, the fight scenes are poorly choreographed, but Jet Li and Jackie Chan could’ve been fighting and they wouldn’t be able to defeat the unstoppable team of this films cinematographer and editor. The music sucks too, but…honestly, compared to everything else, It doesn’t even matter. Had the music been as good as that fake-Morricone stuff from “BloodRayne 2”, I might’ve been sad that it was wasted on this piece of shit.

Everything about “BloodRayne 3” seemed so half-assed, as if Uwe- and everyone else- wasn’t even trying. There’s no buildup. No attempt at creating tension. Things just sort of happen without any sense of excitement or suspense. For example, when Rayne shows up for the first time on-screen, how would you think she would’ve been introduced? I would’ve figured it would be some epic reveal. But nope, Nazi’s are attacked by rebels and we get a shot of her randomly running on a train. That’s not very exciting! Come on, Uwe! Even “BloodRayne 2” had some effort! Hell, “BloodRayne” felt inspired compared to this laziness. After watching “BloodRayne 3”, I learned that it was shot back-to-back with “Blubberella” (which apparently also sucks), even using some of the same sets and actors. Maybe Uwe was simply in a hurry, which would explain why everything seems so rushed. Sometimes, deadlines can be the true enemies of film.

“BloodRayne 3” is a cheap looking, horribly made crap-fest that consistently confounded this reviewer  with its grand display of bad writing and directing. Yes, there is a lot of action and this includes gunfights, handcuffs and blade battles. There’s even quite a bit of gore. But Uwe handles them like he isn’t interested in what’s going on, so why should we? “Bloodrayne 3” isn’t just bad, it’s boringly bad. It makes its predecessors look reasonably well produced in comparison. God damn it, Uwe. I’ve risked my dignity by offering you even SOME praise. I gave positive mentions to “Seed” and “Tunnel Rats” and gave passable ratings to other flicks you’ve done that everyone hated. I even felt that you were improving, but then you have to do this? Well, I hope they paid you well, because I don’t think I want to continue watching your movies anymore. The only thing left to decide is whether or not this is Uwe’s worst film. I think I hated “House of the Dead” a bit more, but this is likely worse on a technical level. Although I have heard that this is a hair more tolerable than “Blubberella“. I’m going to do myself a favor and NOT watch that one. The only reason I’m giving this a 1/4 stars is because it’s short (78 minutes). Had this been 10 minutes longer, I probably would’ve lowered that rating to a 0.5/4.

Nudity: The lesbian sex scene is the only thing Uwe does seem interested in filming, lol.

Overall: “Bloodrayne 3” sucks. Please don’t watch this. It will only make you angry.