(Written and Directed by Christopher Hatton) 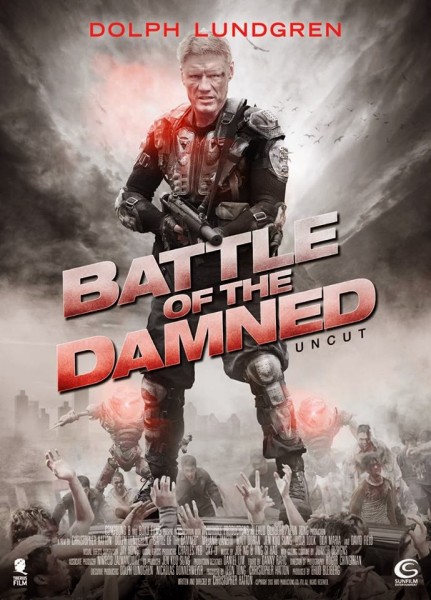 Plot: Max Gatling (Dolph Lundgren) has a name like Max Gatling, which automatically requires him to be an action hero so he take on a mission where he must retrieve a wealthy man’s daughter (Melenie Zanetti) from a city infested by zombies. His job becomes much more complicated when he encounters the killer robots from “Robotropolis“.

The problem with Dolph Lundgren’s direct-to-DVD output is that while his films are consistently competent action-thrillers, his starring vehicles very rarely stand out as exceptional. He seems to be playing the same role each time, the plots are all very reminiscent of better movies and the action sequences are standard. If you’ve seen one, you’ve them all and they achieve such an impressive degree of mediocrity that you almost wish Dolph Lundgren would jump a shark and make something truly awful…which is why I cuddled with “In the Name of the King 2“. Longtime readers might note that I tend to use these same lines whenever I speak of Dolph’s movies, but usually it’s for the sake of context. I repeat this claim here because “Battle of the Damned” didn’t jump over any sharks, it jumped ON the shark and rode it all the way to zombie land and it was AWESOME. What’s more unusual than putting Dolph Lundgren in a zombie scenario? How about throwing robots into the mix for absolutely no reason? That just…transcends quality and automatically makes “Battle of the Damned” the best movie of all time. It’s definitely a true B-movie that struggles against budget limitations and some questionable writing, but at least it stands out!

Technically, these aren’t zombies but are really infected crazy people who just appear to be rotting and like to eat people…which kind of makes them like living zombies…But I’m pretty sure “28 Days Later” was the big inspiration. I was concerned that the robots would only play a minor part, but they pretty much are present throughout the entire second half of the film. The special effects are surprisingly good for a low budgeted feature, although the minimal production values do ultimately effect some of the action scenes. I’m not sure why the writer/director chose to make a random connection with “Robotropolis“, as there isn’t any foreshadowing to their introduction within the story and “Battle of the Damned” wasn’t marketed as a sequel. They just show up and the characters seem just as confused as the viewers. But without our robo buddies, “Battle of the Damned” would’ve just been another zombie movie that happened to star Dolph. As a writer, Christopher Hatten does his absolute best to make the cast of characters interesting. Max Gatling (awesome name) is dedicated to the mission so much that he practically is a machine, which makes his interactions with the actual machines more interesting. Somehow, “Battle of the Damned” has an existential streak without being too talky about it. It’s a role Dolph is comfortable playing, but he plays it masterfully. The Duke is a compelling character because he’s presented as an antagonist, but an antagonist whose motivations are actually understandable. He has enough moments of decency to where I wasn’t sure what his character would do. Was he going to end up being a friend or enemy? I like how the primary characters are unpredictable and the Duke embodies that. The Asian couple amused me because they tended to conform and reject stereotypes. On one hand, the guy is a martial artist who talks about being a warrior, but he has an American sense of humor which usually does not accompany this kind of character. Jude was pretty obnoxious at first, as she’s incredibly hostile and bitchy towards everyone, but she’s played by a good actress who eventually did win me over. The acting is pretty good overall, but I wasn’t always sure what their relationships were to each-other. Nevertheless,  I was surprised at how much I enjoyed the character interactions and didn’t want to see them all die. Plus, even the robots get a collective personality outside of kicking ass. I loved that! 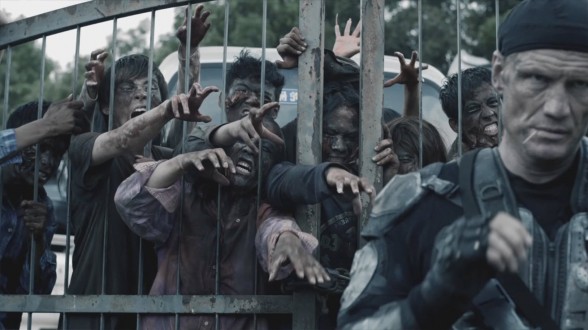 The martial arts choreography is okay, although this isn’t a martial arts movie. A lot of the characters are forced to resort to using blades, especially the Asian men. They were quick and their techniques were precise, although the shaky camerawork and editing often muddled the fight scenes. Dolph doesn’t do anything too fancy and once again, it really does feel like his body is incapable of doing any serious martial arts anymore. Luckily he still has the presence to make up for it. Plus, Dolph always looks cool, so even if his movements are stiff and awkward, he made it work. The camerawork and editing can be VERY erratic, which is especially noticeable whenever the robots are involved. I suspect it was done less out of incompetence and more out of the budget limitations.  Nevertheless, the director does show off some really cool shots, like when we see a character’s final stand against the zombies via shadows and Dolph and the robot fighting back-to-back. I also thought the cinematography was surprisingly moody whenever wide shots (showing the dilapidated city) were used. I wouldn’t call “Battle of the Damned” scary, but it isn’t trying to be and it does have one effective jump scare that got me. The action starts almost immediately and rarely seems to stop, so expect a fast pace. The violence gives an edge to the battles and I could see enough to where the shaky camera and tight editing only occasionally pissed me off. The flick slows down during the middle block in order to flesh out the characters, but it succeeded in creating a connection between them and me, so it was worth it. It made the finale that much more intense, as I cared for what was going on.

But I can talk about shaky camerawork, tight editing, good character writing, solid choreography and a strong cast all I want and it wouldn’t matter. I could also add a few more points, like how characters will sometimes do something stupid in order to drive the plot or how the script relies on coincidences to keep things moving. The dialogue tries a bit too hard to sound clever, instead being unintentionally corny. But I’ll probably forget all of that immediately when placed up against its concept. I mean, it has Dolph Lundgren teaming up with robots in order to fight zombies…That is what will keep this movie within my memory. The fact that I think it’s pretty good is simply a bonus. You should definitely remember that this is a B-movie which stars a former action star and was released straight to DVD. If you expect “Dawn of the Dead” with robots and Dolph Lundgren, or even the “Dawn of the Dead” remake with robots and Dolph Lundgren, then you will be disappointed. But I think we can all agree that Dolph’s clash with fake zombies was much better than Steven Seagal’s clash with fake vampires (“Against the Dark“). Now we need to see Van Damme get in on the fake undead bandwagon. Van Damme Vs…fake ghosts? I’D SEE IT! But be sure to throw in some ass-kicking robots for absolutely no reason. That can only make the movie even better.

Nudity: None, although it almost seems like a love scene was cut out based on one abrupt edit. I don’t want to see Dolph having sex though, so I didn’t feel like complaining about it…

Overall: “Battle of the Damned” is probably my favorite solo-Dolph Lundgren flick. It’s my kind of B-movie!