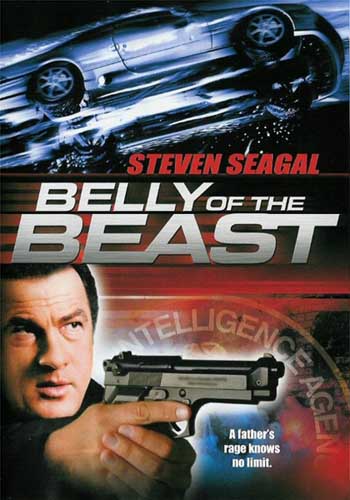 During 2003, Steven Seagal was no longer the box office draw he used to be. While “Exit Wounds” made quite a bit of money, the following box office failure of “Half Past Dead” ensured he would be trapped in the realm of direct-to-DVD film-making until “Machete” would come out almost 10 years later. “Belly of the Beast” was one of his earlier direct-to-DVD movies and the film benefited from surprisingly good production values. “Belly of the Beast” boasts exotic locations, lots of tasty blood squibs, proper lighting techniques and fairly large scale action sequences. There is also A LOT of action in this movie, ranging from hand-to-hand fights to shootouts to weapon duels to hand-to-weapon battles…The point I want to make is that as time went along, producers discovered that Seagal had a loyal fanbase who would watch anything he did regardless of quality. Over time, his budgets would become smaller and smaller until nothing except Seagal and maybe a guest star could be afforded. Even then, Seagal would often be dubbed over by someone else and he’d use a body double for most wide shots. So it would become hard to be a Steven Seagal fanboy. But “Belly of the Beast” was made back when Seagal had SOME dignity and the producers were still under the impression that they had to at least make a passable movie in order to draw in viewers. There’s a lot of violence and a lot of ass kicking. But how good is this ass kicking? 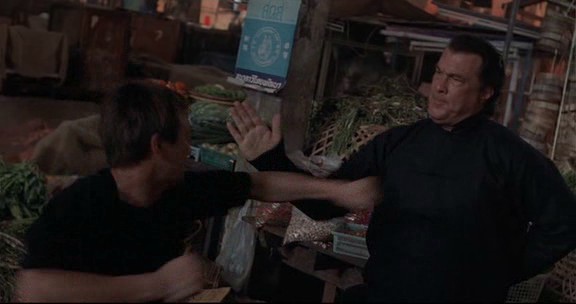 It’s very uneven. Let me say this: “Belly of the Beast” contains the best martial arts choreography to ever appear in ANY Steven Seagal movie, including his earlier efforts. There’s a lot more diversity among the techniques being employed, not just relying on the ‘Seagal grabs someones wrist and flips them over’ or ‘Seagal breaks somebodies arm’ moves which had become dull by this point. Instead, we get flying spin kicks, plenty of different kinds blocks and a lot of fancy handwork. The food market battle was pretty damn awesome. Even better, this is one of the few Seagal films where he has a REAL fight during the ending. Usually, it’s annoyingly one sided, but “Belly in the Beast” gives us a villain who is Seagal’s equal and even manages to overpower him once (albeit through the use of cheating). YAY! I will also praise the stuntwork in general. There are a lot of impressive falls, which is something we all tend to overlook in action movies.

The problem is that it’s a bit too obvious when Seagal’s (much thinner) body double takes his place. He’s the guy who performs in A LOT of these fight scenes. I suppose if this was a legitimately good flick, I would be more annoyed. But the truth is, whenever the stunt double would appear, I tended to laugh. A lot. The guy who directed this made his debut back in 1983 with “Duel to the Death”, one of my favorite kung fu flicks. So why is the direction so bad in certain areas here? He overuses slow motion, which makes the punches and kicks look ‘soft’. Not to mention it also hurts the pacing of the fights. He seems to have forgotten how to frame fight scenes based on certain angles, which don’t pick up all of the movements. Some shots just look silly and the slow motion magnifies their ‘lol’ factor, although at least I was a having a blast making fun of them. Whether intentional or not, this film can be pretty campy. “Belly of the Beast” definitely has its bad movie moments, but at least usually when the director fails, he fails in a good way.

The script, written by the guy who scribed the highly enjoyable “Undisputed II”, is a complete mess. The plot is relatively simple and if you want to see it used effectively, watch “Taken”. The problem with the script for “Belly of the Beast” is that it has way too much going on. There are too many subplots, characters and even action scenes which have no purpose. So obviously Jake is searching for his daughter and this will lead into a lot of intrigue and shit, so what else is there? You have a CIA agent who will try to help Jake, but also kind of get in the way. But he really does nothing. A twist involving him doesn’t make a lot of sense (did he ‘know’ or not?) and his story could’ve been omitted easily. Jack’s partner (Byron Mann) is also present, having his own character arc. Was it just me or was there a lot of homo-eroticism between the two? I swear, they had a more fleshed out love story than the actual love story. Speaking of which, Jake has a love interest (Monica Lo) who doesn’t add much…except a sex scene (I don’t want to see that, Steven) and a bit where her roommate is murdered, but it’s never explained why. It can be presumed, but that leaves another open question about how someone found out something. You have a slew of other characters who have enough screen-time to where you think they will be more relevant, but not enough to actually be relevant. When supernatural elements are introduced…shit just gets stupid. I also felt certain motivations were unclear. BUT! At least the story allows a lot of room for action and reveals. Everything goes down very quickly, so even the padding didn’t bore me.

The acting is without a doubt, the most glaring flaw of “Belly of the Beast”. To be fair, the dialogue is really, really, really corny. But even if they were quoting Shakespeare, the line deliveries are just so bad. A large portion of the cast probably is speaking English as a second language, but there is no emotion in their performances. They look like they’re reading off of cue cards. It’s also not helped that some actors have been clearly dubbed over. Steven Seagal appears to be having fun, emoting a bit more than usual. But even he has some awful moments and occasionally his voice is dubbed over. The best actor is Byron Mann, who really deserves to be in more movies. I think he’d make a good leading man. Once again, the bad performances do have their charm. I usually chuckled more than cringed.

“Belly of the Beast” is definitely a bad movie, but it’s not a boring movie. My biggest complaint regarding Seagal’s direct-to-DVD output is that they’re so lifeless and dull. It’s obvious no one involved cared and just wanted to get the project over with and cash their check. “Belly of the Beast” is 50% genuinely entertaining, showcasing some pretty solid gunfights and fistfights. Even if Seagal’s body double was doing the more impressive stuff, it was nice seeing a REAL full blown fight scene involving the man. But even when it fails, at least it would provide a good laugh. The acting, dialogue, sloppy story and questionable cinematography made me kind of smile. I had fun, which is all I ask for when watching a Steven Seagal movie. I’d still say Seagal’s best direct-to-DVD is “Maximum Conviction“, but this is up there too. Of course, none of his direct-to-DVD efforts compare with his earlier efforts, like “Out for Justice” and “Under Siege“. But I guess we must take what we can get.

Nudity: Yeah, you get quite a bit of gratuitous nudity. There’s also a sex scene and an attempted rape.

Overall: “Belly of the Beast” is one of the only direct-to-DVD Steven Seagal flicks that’s worth watching, although it’s better to see it with your friends while liquor is present.