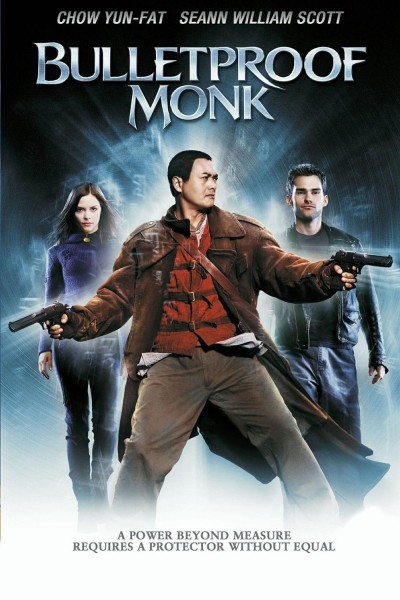 Plot: A nameless Monk (Chow Yun-Fat) has been carrying a mystical scroll since World War 2, protecting it from people who would abuse its powers, particularly the Nazi’s- who haven’t given up 60 years later. But their conflict becomes more intense when the Monk meets Kar (Seann William Scott), who might be his successor.

I remember seeing “Bulletproof Monk” when it did a flying jump kick into theaters (using CGI and wires, I’m sure) back in 2003. But I haven’t remembered much about the movie itself, except that it was pretty unimpressive. As of 2013, 10 years since its debut, it has NOT aged very well at all. It is a fairly quick watch, never going on too long before the next action scene comes to greet us, but I can’t say I was ever entertained. In fact, throughout most of my viewing, I felt really uncomfortable. It’s embarrassing seeing a talented cast forced to spew out bad dialogue they probably didn’t understand, participate in a stupid, hole ridden story and perform fight scenes using horrible special effects. “Bulletproof Monk” is just kind of awkward to watch…Did I just review the entire movie in one paragraph? Can I stop here? No? Damn it. Curse you voices in my head!

Let’s begin with the action sequences! It’s common knowledge that Chow Yun-Fat is not a real martial artist, but given the right choreographer, he could convince us otherwise. Unfortunately, the choreography present in “Bulletproof Monk” is mostly standard. There are a few slick techniques here and there, but they’re buried underneath the mediocrity of everything else. There is enough fighting to make up for this, but then that is yanked down by the scruff of its neck by the bad direction. Paul Hunter was and is a prolific music video director, but that talent doesn’t automatically translate into film. The camera is always too close to the action, obscuring various movements and the editing is so erratic that it becomes difficult to tell what is going on. But it’s the use of wires and CGI that really creates the sinkhole which would suck “Bulletproof Monk” down into the pits of hell. The Wire-fu always looks like someone is being hoisted around by a wire, which took me out of the mayhem. The CGI just looks AWFUL and it’s not because this was a 2003 feature either. “The One (2001)” managed to age gracefully and that movie utilized MORE CGI. There are some cool ideas within the action, such as when the Monk attacks a helicopter, but the execution is so laughable that they cease being cool. The green screen looks too much like a green screen and it’s obvious when the motions are being speed up in order to make Chow look faster. The bullet time effects had lost their appeal in 2003, so by 2013, I find myself cursing “The Matrix” for starting that stupid trend. The best part is when the Monk gets his hands on a pair of guns. That was kind of awesome, so “Bulletproof Monk” should’ve focused more on non-fatal gunplay. 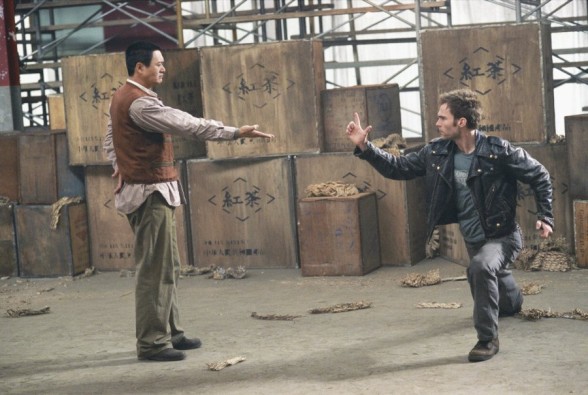 With a movie like “Bulletproof Monk”, the visuals and action are going to be the primary focus, so its failure to deliver quality visuals and action means that the overall feature will be a weak one. The script isn’t going to matter as much and honestly, it doesn’t. Everything I point out in the following paragraph is just me being a critic, I don’t really care. The overall story is safe and predictable, although why wouldn’t it be? There are a handful of amusing moments, but I kept feeling like I’ve heard the majority of its jokes before (medicine made of urine). The characters relationships were thin, the philosophical moments make no sense (the hotdog bit had a stupid answer) and characters are amazingly inconsistent. The Monks sensory powers only seem to work when the plot requires them too (he can tell whenever the villains are attacking until he needs to get caught) and why don’t these monks ever fight? One guy is established to be pretty tough, but the villains just grab him and dispose of him and he doesn’t even fight back! I especially love how the ‘never take another life’ motto of the Monk is thrown out whenever it’s convenient. I’m pretty sure he killed the poor fool who was thrown out of a helicopter and using human shields to block bullets is still ‘killing’ them. The villains are boring too. When the plot can be summed up as ‘Kung Fu Monks Vs Kung Fu Nazi’s’, I expect stupidity. But I don’t expect dull stupidity. I’ve seen films with worse scripts, but “Bulletproof Monk” was not well written.

Finally we’ve come to the acting. In everyone’s defense, the dialogue is pretty sucky. The exposition is poorly disguised, the attempts at saying something deep feels forced and the jokes often feel out of place. Hey, your Father figure just died and within the same night, you’re goofing off and flirting with the girl? Douche. The Funktastic guy made me laugh though, although I’m not sure for the right reasons. Seann William Scott (Kar) isn’t as miscast as I thought he would be, arguably selling his martial arts skills better than the more seasoned Chow Yun-Fat. He tries with what he’s given, but the script works against him too often. Chow Yun-Fat is a good actor, but his English speaking abilities must’ve been incredibly limited at this time because he sounds like he doesn’t understand the words coming out of his mouth. His action scenes weren’t very good either. At least he has a personality though, which is uncommon for these kinds of characters. Everyone else ranges from bad to underused (Roger Yuan again!? Hey, it’s Mako!) to…well, they try…Another issue is the characters often talk too fast, making it hard to process what they’re saying. 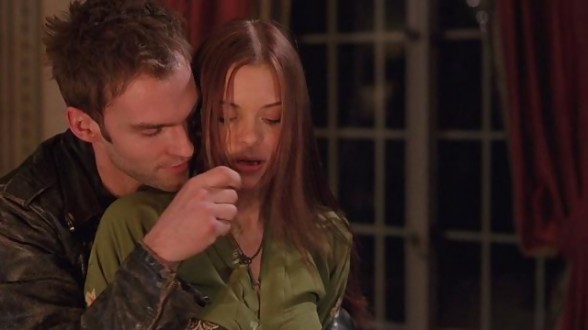 “Bulletproof Monk” isn’t unwatchable, but most of what it does right is insignificant. Above everything, it’s just not very good. I didn’t enjoy it as an action film and its daft story was just kind of boring, despite having some bizarre ideas going for it. When this was produced, there was a temporary martial arts craze due to the success of “The Matrix”, Jackie Chan and “Crouching Tiger, Hidden Dragon”. Plenty of foreign films were released theatrically in the United States (“Iron Monkey”) and Hollywood attempted to produce its own kind of kung fu film- such as “The One”, “Shanghai Noon”, “Blade” and “Bulletproof Monk”. Some were good, “Bulletproof Monk” was not. It was just the kind of movie that few people liked, but no one hated enough to bother remembering. I doubt this will stay with me longer for a week. It’s kind of a shame that this brief martial arts trend burned itself out rather quickly and I personally blame failures like “Bulletproof Monk“.

Nudity: None, but there’s a fight scene with some sexual undertones and a female villain is a bit rapey towards the Monk.

Overall: “Bulletproof Monk” wasn’t very good to begin with and it’s only gotten worse over the years. Just because it might be tolerable does not mean one should bother with it.