(Written and Directed by Jennifer Kent) 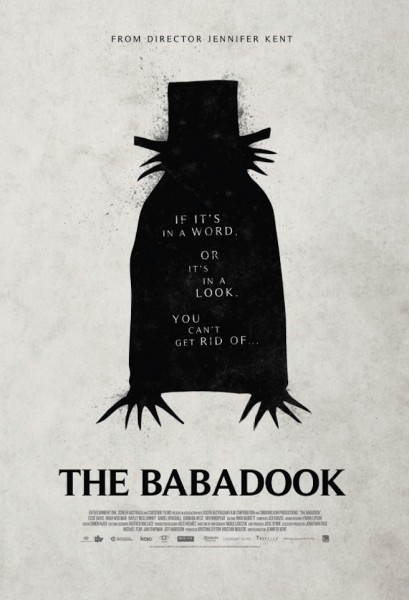 Plot: Amelia (Essie Davis) is a widow who is struggling with raising her troubled son, Samuel (Noah Wiseman). When he starts seeing a mysterious specter known as the Babadook, she presumes he’s just having an emotional episode. But when strange things start to happen…

I remember seeing the moody trailer for this, which actually got under my skin despite utilizing the tired ‘haunting’ formula and its advertised accolades convinced me that horror fans might have a new classic- but then the title was revealed to be “The Babadook” and I burst out laughing. My immediate thought was: “This sounds like the title for an Adam Sandler movie” and during my final viewing experience, I kept imagining Sandler yelling “Baba-Baba-Dook-DOOOOOOK” in that annoying 90’s voice of his. And then I remembered “Grown Ups 2” and resentment filled my core. That piece of shit is my own personal Babadook, keeping me up late at night. filling me with unrelenting torment and terror, but I digress. “The Babadook” built up a lot of hype amongst horror fans and even professional critics, although this didn’t lead to a major theatrical push, presumably because they had to make room for masterpieces such as “The Pyramid“, “Ouija” and “Devil’s Due“. Now that I’ve seen it though, I find myself sympathizing with the distributors, as I can see younger audiences (target demographic for this genre) finding it to be too slow and cerebral. “The Babadook” is really a terse family drama dressed as a horror flick, although I don’t want you to assume that it’s not scary. This movie can actually be very terrifying, but it’s less about ghosts jumping out at you and more about the psychological deterioration of its protagonist- which is either being caused by the specter or is the cause of the specter. I thought it was great, but you have to be aware of the kind of experience you are getting yourself into.

“The Babadook” is not one of the greatest movies of all time, or even one of the greatest horror movies of all time, but it does boast one of the greatest introductions of all time. The film opens with a nightmarish, psychedelic dream sequence that revolves around falling and I love the prop placement- which makes this otherwise normal set kind of resemble the menacing face. Using minimal dialogue, the film brilliantly uses visual storytelling and clever foreshadowing to explain everything we need to know. Immediately I understand the situation, the dynamics of this central relationship and can also just appreciate the imagery. Amusingly, one of the films overarching shortcomings is its tendency to use exposition to clarify large chunks of the back-story, which is unnecessary and contrasts too much with the opening scene. Samuel (Noah Wiseman) is a special needs kid and Amelia (Essie Davis) doesn’t seem to know how to deal with this, which is creating a significant amount of pent up tension between the two. Within the first 30 minutes, you will feel just as exhausted and tormented as Amelia, who completely has your sympathy. Samuel makes those kids from “The Children” look well behaved and quiet in comparison, as he never seems to shut up, never considers anyone’s feelings and is prone to violence, even though he’s not a malicious child. He just has some sort of mental disorder and Amelia hasn’t done a very good job at addressing the situation. Nevertheless, this knowledge didn’t stop me from wanting Amelia to throttle the little bastard, but then…I felt bad for feeling that way. For one, because no one else seems to understand that this parent-child duo has problems, so my ire transferred to the sister, teachers, etc. But over time, Amelia’s character arc starts taking a darker turn and my sympathy morphed into unease. I began to fear what she was capable of and Essie Davis gives a flawless performance. She perfectly conveys every emotion and sold me on her descent into madness. Most of the suspense comes from her increasingly unstable personality and the big question is…what is going to happen when she snaps? I started to worry for Samuel, even though he was very annoying. Noah Wiseman is mostly believable as the troubled kid, but sometimes did take me out of the movie by smiling during intense sequences. Otherwise, the acting is very good and both Davis and Wiseman inject their characters with a dosage of creepiness. Something seems ‘off’ about both of them, adding another layer to the picture. 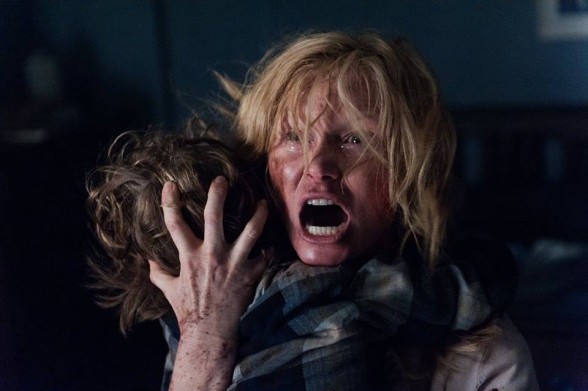 So…where does the Babadook character come into play? He makes himself known with his strange children’s popup book, which had awesomely creepy art design. “The Babadook” has a very slow burn style of suspense and during the first half, you only get the aforementioned book and the occasional strange noise. Otherwise, the supernatural presence is minimal and even when it starts peeking its head from around the corner, most of it is left to our imagination. Unfortunately, it can be argued that the brief glimpses we get don’t compare to the power of our imaginations, but even by the ending…you barely see what it is. That voice was pretty unsettling though, even if ‘baba…baba…DOOK DOOK’ is a line that might induce giggles. But I have to praise the filmmakers for selling me on something that should be much sillier. The director does a good job at building up these scares and the sound design, lighting and editing worked together to creep under my skin. There is also a lot of really cool camera work as well, with some shots standing out as very unique, if not outright original. I’m tired of films with that washed out visual style, where all the colors are muted and unappealing, but director Jeniffer Kent makes it her own. Every shot seems designed with the bleak color palette in mind. Would I call her style of direction somewhat artsy? Yeah, but it gave the film a classier feel and never becomes too self indulgent. There is a lot of symbolism, especially during the resolution, which you will either love or hate. It felt very David Lynchian, probably even directly borrowing from one of his endings, although I won’t say the name to avoid spoilers. I personally thought the resolution worked, defying my expectations while making me think about what I had just witnessed. Overall, I really enjoyed the dread soaked atmosphere of “The Babadook” and appreciate the lack of ‘jump scares’. There are a few, but they’re earned.

I guess “The Babadook” does use the formula of the traditional ghost story. The kid sees things and nobody believes him. Eventually the Mother- and it’s always the Mother- starts to as well, but nobody believes her. Expect a lot of drama surrounding friends and family alienating them because of their disturbed behavior. Expect the threat of the Government deeming her to be an unfit Mother and taking the child away. If anything bad can happen to this woman, it will. The big question is whether the Babadook is real or if it’s a figment of their collective imagination. Is she going insane because of this entity? Or is the entity merely a product of her insanity? I’ve seen this done before, but I like how the answer to that question never really matters. If Amelia ultimately snaps and turns on her kid, then its existence is irrelevant. If the Babadook exists, it can’t do anything that Amelia doesn’t secretly want to do herself. But while it might be using a worn out formula, the script offers a lot of new material that kept the story fresh. There are plenty of unusual storythreads, twists and quirks which help give this movie its own identity. But above everything, I was immersed into the plight of these characters and really wanted to see a happy ending, even though I couldn’t tell whether or not the movie would oblige me. Jennifer Kent might be a little inexperienced when it comes to full length featured films and there are some noticeable technical gaffs, but she penned a strong story, acquired an excellent cast and crew and cemented the awesomeness of “The Badadook” with her creative and charged visual style. I’m a fan, although admittedly I’m not entirely sure I want to experience this again anytime soon. Perhaps it did its job too well!

Violence: It’s rated R and there is enough violence to justify that rating, although this isn’t especially gory.

Overall: “The Babadook” was really good, even though it isn’t for everybody.