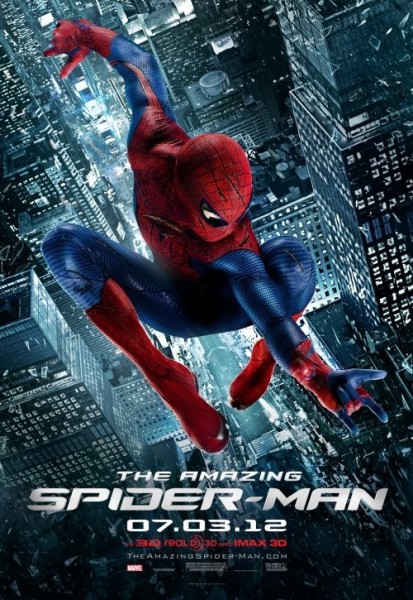 Plot: Peter Parker (Andrew Garfield) is your average, High School kid. However, his life changes when he discovers that his (deceased) Father worked with Dr. Connors (Rhys Ifans), a controversial scientist who studies lizards. Apparently Peter’s Father and Dr. Connors had been working on splicing human and lizard DNA, which if successful, would rid the world of most illnesses and restore Connors’ lost arm. Nevertheless, while exploring his laboratory, Peter is bitten by a radioactive spider. This causes drastic changes in the boy, giving him perfect reflexes, abnormal speed, uncontrollable strength and the ability to scale walls. It boosts his confidence and he finds himself dating his crush, Gwen (Emmo Stone) and working alongside Dr. Connors. But confidence evolves into arrogance and he must pay the consequences. When his Uncle (Martin Sheen) is murdered because of Peter’s negligence, Peter decides to create ‘Spider-Man’, his alternate ego who acts as a heroic vigilante. He hunts for his Uncle’s killer while gaining a controversial reputation. The public loves him, but now he’s being hunted by the Police, led by Gwen’s Father (Dennis Leary). Yet things get even worse when Dr. Connors is pressed into testing the DNA splicing on himself. This turns him into a monstrous reptile who, in a state of madness, terrorizes inferior lifeforms (humans). Now Peter must man up and stop this new menace, because the entire city is now in danger.

Even though “The Amazing Spider-Man” is a good movie, I still find myself feeling mixed about its existence. In a way, I was hoping this would fail. I guess I can live in a world of remakes and reboots, but it really concerns me when they start rebooting/remaking movies that only came out 10 years ago (and spawned sequels up to five years ago). I have this nasty nightmare where in the future, movies are remade every year. The gap is shortening with the five year bridge between “Hulk” and “The Incredible Hulk“, not to mention “Superman Returns” and “Man of Steel“. The ‘it’s closer to the source material‘ argument ceased being reliable when the “Conan the Barbarian” remake (which thrived on that claim) turned out to be bland and generic. I personally suspect that the studios only stress this because it disguises business as art. I understand and support that Hollywood is a place of business, but a movie should make money because it’s great, not because of the name value. “The Amazing Spider-Man” was somehow even being more shameless by claiming that it was the untold story. Er, sorry movie, but this story was told 10 years ago and this reboot isn’t THAT different. Still, it almost bothers me that “The Amazing Spider-Man” did not suck. I can’t make an example out of it because it is surprisingly well made, possibly even inspired.

“The Amazing Spider-Man” works because it balances action and drama evenly. It’s exciting, funny, sad, inspirational, touching, intense, grim and even a little campy. It’s got good special effects, although I remember being more impressed with the visuals in “Spider-Man 3“. There’s nothing groundbreaking with the CGI, but the action itself is top notch. The fights are sharply choreographed and smooth, with the camera always being in the right place to capture them. The editing is tight, but never to the point where it becomes incomprehensible. The director does a spectacular job of putting its protagonist in edgy situations, like when Spider-Man finds himself cornered by the Lizard in a sewer. You really feel his panic and vulnerability during that sequence. But the fights also have heart because Peter is not perfect . When he comes home from fights, he’s bruised and battered. He makes mistakes, but the movie never undermines his strengths either. So the action is great, but I wouldn’t say that “The Amazing Spider-Man” is action packed. So how is the rest of the movie?

Despite claims that it’s closer to the source material and is the ‘untold story’, “The Amazing Spider-Man” shares an identical structure with the 2002 version. Peter is a loser, gets bitten by spider, learns of his powers, gains confidence, gets the girl, beats up the bully, becomes conceited, indirectly causes the death of his Uncle by his lack of action, hunts uncles killer, finds himself fighting a sympathetic villain who has been practically forced to test a serum on himself which turns him crazy (he hears voices) and in the end has to accept that by being a masked vigilante, he’s endangering everyone he loves. With great power comes great responsibility! Yes, there are a few tweaks and the characters are all different. But the story is more-or-less the same. This isn’t necessarily a terrible thing. Liking “The Amazing Spider-Man” comes from the execution of the story.

I felt that “The Amazing Spider-Man” was in the same class as its predecessors, but I wouldn’t say it was better. It all comes down to how you feel about the trilogy. I thought Andrew Garfield made a better Peter Parker than Toby Maguire. Maguire primarily acts with his eyes and it worked well, but Garfield seemed to have more moments dedicated to how good his acting is. In fact, this reboot was more effective when it comes to exploring Peter’s inner journey.Throughout the bulk of the movie, he never completely adjusts to the changes in his body (yeah, is Spidey a metaphor for puberty?). He’s constantly breaking things because he can’t control his strength, tends to react poorly under stressful situations and he can be very arrogant. But he’s trying to improve himself and it’s easy to forget that Peter is a teenager who has just acquired super powers. We’d all probably be no better. Peter is a fully realized character, so that’s a good thing. The supporting cast is stellar too, although we’ll explain the downside to the characters. At least they cast Emma Stone as the shallow love interest. That girl is a charmer and her chemistry with Garfield redeems the thinly written romance. 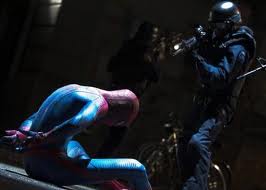 So where does it fail? In short, the movie is too long. The film seems to be building up to some big revelation involving Peter’s parents and the movie spends quite a bit of time on that mystery. But there is no pay-off and it starts to feel like the movie forgot about that. Yeah, I know that it will probably be explained in the sequel, but that’s not enough. If they wanted to spend so much time with that subplot, they should’ve done that for the second movie. Here, it;s just padding. I also wish there was more to the hunt for Uncle Ben’s killer, although the lack of resolution was pretty daring. Another big issue I have with the movie is how it manages its time, focusing on the wrong characters during pivotal moments. Just look at the big emotional sequence between Peter and Dennis Leary’s character. It’s supposed to be a major scene, but it’s strange because that character wasn’t in the movie enough for me to care. That wasn’t just manipulative, it was “Men in Black 3” manipulative. Perhaps these weaknesses are only present because the movie had too many screen-writers (three of them), because there does appear to be some tug-of-war going on between the plot threads. It’s not as glaring as “Green Lantern“, but it fails to juggle all of its stories like “Spider-Man 3” (note, I do think “SM3” is an inferior film as a whole) managed to do. I personally wanted more interactions between Peter and Dr. Connors. Or Peter and His Aunt (Sally Field). So like many other movies, “The Amazing Spider-Man” throws its weight in the wrong direction and becomes bloated for its mistakes.

But “The Amazing Spider-Man” made me laugh, cry, chew on my nails and sit on the edge of my seat. It was a good coming of age story, about a teenager who struggles with change. But it also was a good comic book, action movie. It has a great cast at its disposal, which the movie is sure to use effectively. Hell, they even got old Martin Sheen to actually “act” once again. Sure, its bloated running time is a problem, but it only keeps the movie from achieving greatness. But is there anything wrong with just being good? Is it better than the trilogy? Well, it certainly is less offensive than “Spider-Man 3” (uneven) and perhaps it’s a bit more memorable than “Spider-Man 2” (I’ve forgotten it). What about the first “Spider-Man”? I’d say they’re about the same. It boils down more to scenes than the overall quality though. I’d prefer one scene in the original, but would embrace another scene from the reboot. So I guess I should apologize to “The Amazing Spider-Man“. I was wrong to hate this movie before it even came out. Good movies should be treated as good movies, remake or not.

Note: It’s being listed under “martial arts movies” because of the many hand-to-hand combat sequences.

Overall: Give “The Amazing Spider-Man” a look, but don’t expect greatness from it.