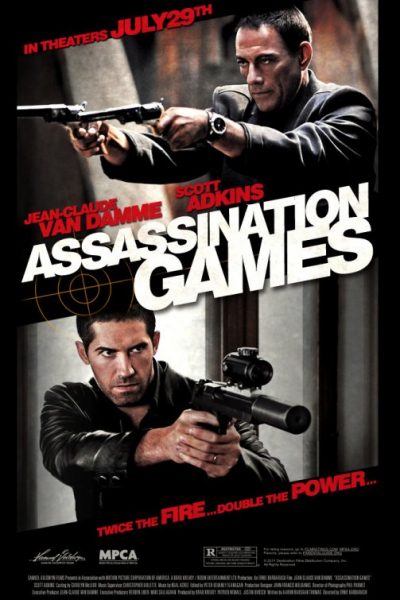 Plot: Vincent Brazil (Jean Claude Van Damme) is a hitman who lives in isolation, having no friends or family, because they would only get in the way of ‘the hit’. His latest contract is Polo (Ivan Kayte), a sadistic mobster who has just been released from prison. Polo was actually released by the Government, who wishes to use him as bait to capture/kill Roland Flint (Scott Adkins), a rogue agent who stole dirty money from them. Flint has personal reasons for wanting Polo dead and even though he quickly deduces that it’s a trap, decides to get his vengeance anyway. While this puts the two assassins at odds with each other, they ultimately form an unsteady alliance.

The biggest problem surrounding “Assassination Games” has less to do with the movie itself and more to do with the expectations of its target audience. For one- “Assassination Games” is the kind of title normally reserved for action-thrillers. But more tellingly, the two lead actors are Jean-Claude Van Damme and Scott Adkins, a veteran martial arts star and an rising martial arts star, so what kind of movie do you think they would make together? I guessed a steamy romance of some kind, but most would assume a martial arts flick, or at least an actioner with some martial arts sprinkled on top. I doubt anyone would’ve expected a f@cking drama, where instead of fighting, they talk about their feelings like actual human beings…and we all know that Van Damme is a cyborg, so nobody wants to see that! Apparently I do though, because “Assassination Games” is pretty…good…Yeah…I should point out that there are action scenes, which includes both shoot-outs and hand-to-hand combat, but they’re spaced out enough that large chunks of time will go by without any fighting. They aren’t particularly stylish either, being grounded-in-reality to the point of being kind of bland when you separate the scenes from their narrative. But once I got over the fact that this movie wasn’t going to blow my mind with awesome fight choreography, I still felt sullen from the lack of awesome fight choreography…BUT THEN I began to appreciate that “Assassination Games” is more interested in suspense and story than it is in spectacle. 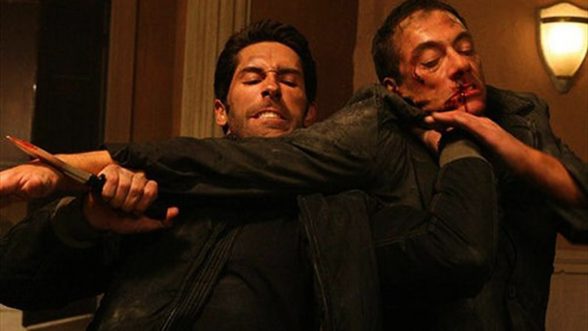 I’m not going to pretend that this is high art, or even exceptional for the kind of movie it wants to be. But I spent the entirety of my viewing experience marveling at how much Van Damme and Adkins have improved as actors, with both performances being amongst their personal bests…and for those who disparage their acting enough to assume that their personal bests probably suck too, then let me just say that I thought they both were great. Their characters are well-written and I liked how you could never completely trust either of them. Both are morally grey enough that when betrayals ensue, it’s not really that surprising, although they’re still likable (and more importantly, compelling). “Assassination Games” is also a very suspense driven film, focusing more on building up to the bloody confrontations than the bloody confrontation themselves. Barbarash directs with a steady hand, achieving a level of technical competence that you don’t see very often in direct-to-DVD flicks. The Cinematography and editing are solid, reflecting the gritty and bleak tone of this story and aesthetics. There are a lot of shots that only focus on facial expressions, but they work because the actors are allowed to tell the story themselves with just a look. My favorite scene was after a betrayal, when slow motion is used to capture the characters ‘reactions’. Van Damme’s world weary gaze and Adkins’ defiant glare told me everything I needed to know about both men and the simple-yet-effective camerawork and editing made it into a very powerful scene. Yet I also have to acknowledge the flaws, as some of the more romantic interactions (which sadly aren’t between Van Damme and Adkins) were corny and I didn’t like the overuse of flashbacks. You can argue that the drama is undermined by the action scenes, reducing the films’ maximum potential for emotional catharsis. You can also argue that there should’ve been less scenes of characters moping around in front of the camera, with more being dedicated to the action. “Assassination Games” doesn’t strike the perfect balance of drama and action, so it’s possible you might find it underwhelming. But for me this was a positive experience because I am such a fan of both Van Damme and Adkins. It was rewarding seeing them not only turn in strong performances, but carry the bulk of the film on their shoulders and I think that was the point- to challenge them as actors. Barbarash’s unpretentious direction only draws more attention so their acting, so I thought “Assassination Games” was good because of this. Great? No. Memorable? Not really, but it was solid.

Nudity: Some breasts and an implied gang rape.

Overall: “Assassination Games” is good, but keep in mind that it might not be the kind of flick you’d want out of either Adkins or Van Damme.

-Note from Author: My original review was fine, I guess, but holy crap they were certainly long winded at the time. I just chose to cut out all the fat.

“JEAN CLAUDE VAN DAMME AND SCOTT ADKINS DO THEIR MOST BADASS THING YET…talking about their feelings.”- Signed by MartialHorror.

The biggest problem surrounding “Assassination Games” has less to do with the movie itself and more to do with the expectations of its target audience. For one- “Assassination Games” is the kind of title normally reserved for action-thrillers. But more importantly, it stars Jean Claude Van Damme, a martial arts star who was big in the 90’s but has found his way onto the direct-to-DVD market. While his films might lack the technical dazzle his bigger budgeted films may have had, JCVD himself has improved. His fight scenes are sharper and his acting is stellar. His co-star is Scott Adkins, who has yet to achieve the fame of Van Damme, but showcases more talent. He’s yet to find a big theatrical gig (well, depending on how big his role in “The Expendables 2” is..), but he’s torn through the direct-to-DVD market with his excellent martial arts, appearing in excellent actioners like “Undisputed III” and “The Tournament”. He might not be a great actor, but he’s improving, and his martial arts skills look stunning on screen. He has the coolest moves in the entire industry and I feel might even be more of an asset to the genre than Tony Jaa, even before Tony Jaa went insane. But do you notice the trend here? Both are martial arts stars, so one would expect a martial arts movie. Hell, at the absolute least, you figure its going to be an action film with a fair amount of martial arts! Who would’ve thought that “Assassination Games”, which stars two martial artists, would be a fucking drama-thriller that happens to have some action and some fight sequences!?

Once I got over the fact that this movie wasn’t going to blow my mind with epic fight choreography, I still felt sullen from the lack of epic fight choreography. Then I remembered I had already gotten my ‘Van Damme Vs Adkins’ fix with “The Shepherd”, which despite its many shortcomings, at least had a good fight scene between the two. I have since made my peace with the lack of fight choreography and you should too. The few fight scenes we get are very rudimentary, almost something on par with a Chuck Norris movie. You can see Van Damme’s and Adkins impressive skills at times, and there are some slick moves. But choreography is about action and reaction. You need good stuntmen to achieve a rhythm, and it’s obvious these stuntmen were not used to advanced fight sequences. But when the two stars finally fought, I was surprised at how mediocre the fight was. It ultimately occurred to me that the fight scenes were intentionally bland. They would’ve felt too out of place in this gritty, down to earth, drama-thriller. So does it succeed as that?

Yes and No. “Assassination Games” reminds me a lot of “Faster”, the Dwayne ‘the Rock’ Johnson vehicle. Like “Faster”, “Assassination Games” tries to blend action with drama. But that’s a very difficult balance to achieve. To me, when you create a hybrid like this, you need to go all out with action AND drama. Instead, like “Faster”, “Assassination Games” manages to have a little of both. The drama is pretty moving and the action is pretty good. It relies partially on suspense, primarily building up to a ‘hit’, but everything is achieved with a technical competence that surprised me. It was unpretentious, but shot and edited in a way that ultimately does create a flow. The drama comes in the form of the characters relationships and interactions. Van Damme’s character has nothing to live for except himself, but his growing feelings towards a prostitute do lead to some touching sequences. Scott Adkin’s character had everything, but then he lost it all, which makes his character even more sympathetic. The problem is, this is one of those movies where the action almost seems to take away from the drama, and the drama takes away from the action. As someone who expected an actioner, I found the overuse of flashbacks, scenes of people moping and the almost mawkish romantic moments to take the steam away from the film. If you expect more drama, you might find the action to be rather conventional, taking away from the growing dramatic tension. I believe it succeeds on both levels, but the levels just don’t work well together. So why do I like “Assassination Games” more than “Faster”?

For me, “Assassination Games” was a success because it showed how much Van Damme and Adkins have grown as actors. As his career fell into the more obscure, Van Damme honed in on his craft, which lead to his outstanding performance in “JCVD” (now that’s a drama!). Here, his performance is low key, projecting a world weary charm while not overly trying to ‘act’. His dialogue delivery can be awkward, but it fits his anti-social character. He exists simply to exist, and Van Damme does that well. Scott Akins was a bigger shocker. While he did great in the “Undisputed” sequels, his leading man capabilities were in doubt with “Ninja”. Here, he conveys someone who acts calm, but is smoldering with rage on the inside. Both play similar yet different roles and while sympathetic, you never forget that these guys are cold blooded assassins. They take no prisoners and will kill you in front of your family if they feel they have to. It was watching two stars I love very much doing something different that intrigued me the most. Everything else was practically a bonus. To finish my comparison with “Faster”, I was dismayed at how the film used its star. Dwayne Johnson is a good actor, but that movie hardly required him to act, so he was used as a prop that skills people. “Assassination Games” uses its stars effectively and they seem to more-or-less have the same screentime.

But consider this, is my reasons for liking it make sense to you? I’d say on its own, it’s a 2.5 star movie. It’s decent, not being bad while not being especially good, but is also not what fans would expect it to be. I’m giving it a higher rating simply because it used its two leads so effectively, and the leads did surprisingly good. To me, it’s not so much that the movie was a success, it was that Van Damme and Adkins were such successes that they drove away my doubts about the film. Obviously you need to consider everything that’s been said and decide if the film is for you.