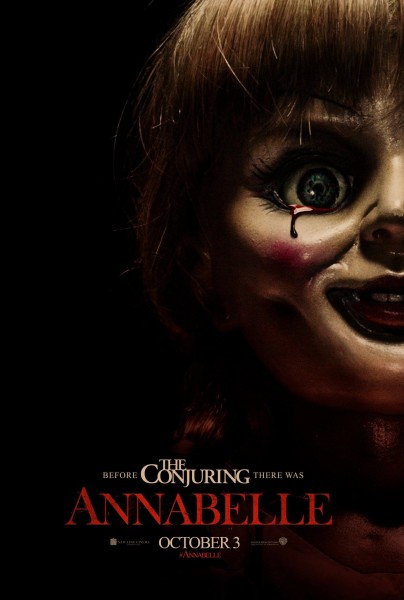 Plot: A married couple acquire a possessed doll, which haunts them.

“Annabelle” sucked. I knew it would suck. Many had hope for this project though because it was a spin-off of “The Conjuring“, which was arguably the high point of this awful wave of haunting flicks. I remained skeptical because if James Wan couldn’t recapture the success of “The Conjuring” with “Insidious: Chapter 2“, then what chance did the guy who directed “Mortal Kombat 2” have? Yet the marketing campaign worked diligently to make you think that James Wan was at the helm once more because he has a producers credit…I suspect his contributions were limited since he has been so busy working on “Fast and the Furious 7“, but he was probably paid a lot of money just for his name value…Hollywood is stupid that way. The character of Annabelle was definitely the dark horse of “The Conjuring“, as many felt she stole the show from the primary villain of the story. But outside of her admittedly unsettling appearance, is she really that scary? All she had done was teleport and vandalize some shit, which EVERY demonic entity can seem to do. It’s kind of anti-climactic knowing how easy she will be defeated shortly after the events of this film, but the majority of the fanbase didn’t see these warning signs…Even the trailer only seemed to boast one really good scare, so I can take some comfort in my low expectations…*sigh*… “Annabelle” proves that the character of Annabelle only really works as support, as she isn’t scary enough to sustain her own movie..Although to be fair, the lazy and formulaic script didn’t do her any favors.

Are we sure that Hollywood doesn’t own a super computer that generates these scripts using established conventions and cliches? Does “Annabelle” contain a single original thought in its entire being? Let me ask if this sounds familiar. You have a Mother who experiences the paranormal, but comes across as crazy whenever she tries to make her point. The Father is a natural skeptic who thinks she just needs psychological help. It just so happens that the Mother has a friend who has knowledge of the occult, so there won’t be any real writing required in order to provide exposition. The demon seems to have an unhealthy desire for the infant child. The characters move in order to escape the unseen menace, but it fails and their marriage starts to crumble. Am I reviewing “Annabelle” or “Insidious“? Because these two movies are sounding awfully alike and “Insidious” borrowed a lot from its predecessors as well. The story plays out in an annoyingly familiar way, except somehow it manages to dumb this general laziness down even more. There is a scene where the Mother talks to a Detective in order to learn more about the occult…What was the point of that conversation? To explain to us that the strange markings on her arm were Satanic…Thank you, movie. I would not have known that those Satanic looking marks were satanic unless you had explained that to me. The tie-ins to “The Conjuring” were also very forced, especially with the  opening and closing of the story. It starts with footage from “The Conjuring“, where the three nurses attempt to justify letting the paranormal in their home by saying “We’re nurses, we’re supposed to help people“. That was already a pretty weak line to begin with, but “Annabelle” is sure to conclude with an old woman buying something for her granddaughter “who is a nurse, she loves to help people“. Thank you, movie. I could not have made the connection without you reusing the same shitty dialogue. Speaking of idiocy, the characters tend to act like morons in order to advance the story. If the Catholic Priest explained how demons can’t have the souls of children WHEN HE WAS WARNING THE PARENTS WHAT THE DEMON WANTED like any reasonably intelligent person would, the entire third act wouldn’t even exist. Random Note: What was with those two kids? Where they supposed to be ghosts? Did they really introduce these characters and dedicate an entire scene to them for a single creepy moment which has little to do with anything else? I’m assuming that the writer- presuming Gary Dauberman is a real person and not a machine- realized he still needed to check off ‘creepy children’ from his required cliches list. 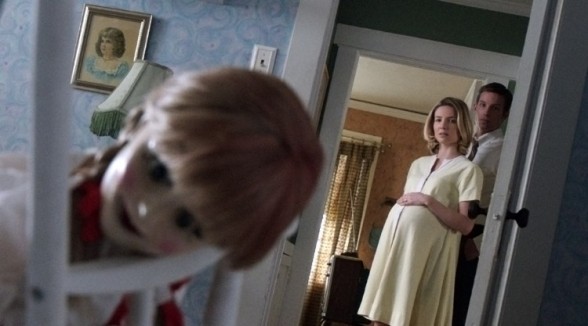 “Annabelle” does contain a handful of frightening moments. I actually really liked the ‘home invasion’ sequence early on. It was cleverly framed, left enough to the imagination and was suspenseful. The stairwell scene was pretty intense as well, although epileptics will probably have seizures. As for the rest…I will concede that I occasionally jumped during other parts of the movie, but only because John R. Leonetti was recycling scares from “Insidious“…as if “Annabelle” wasn’t already too similar to that film already…Leonetti does his best to imitate Wan’s visual ideas, which he does so competently, but only for individual scares. He lacks Wan’s ability to create a distinctive tone, generate any overarching tension or build any noticeable atmosphere. I didn’t care about the characters, although that didn’t matter too much because I never felt any sense of danger surrounding them. The acting isn’t very good either, although it wasn’t glaringly terrible. I suspect that they weren’t being given adequate direction, as the performers seem unsure who to respond to certain situations. They even undersell the fear they’re supposed to be feeling.

But I could’ve dismissed “Annabelle” as passable, even with its subpar acting, uninspired script and derivative scares if I thought it was nicely paced. Unfortunately, “Annabelle” is really, really boring. Leonetti relies too much on Annabelle’s creepy appearance. I’m not entirely sure why anyone would want to buy such a thing as it looks too much like a horror movie prop, but whatever. After an hour of ominous zoom ins on its face, the effect starts to wear off. Most haunting films have a slow burn style of suspense, where the scares become bigger and deadlier…”Insidious” has a bunch of grotesque specters and a freaky dimension filled with all sorts of ghastly images. “The Conjuring” has an intense exorcism. Even lesser flicks such as “Mama” and “Dark Skies” go all out during their finales. But what about “Annabelle“? We get a moving doll, glimpses of the devil and writing on the walls…shit that would usually be present during the 1st half of any other haunting movie…most of which we had already seen during THIS MOVIE! That’s both underwhelming and repetitive! The best “Annabelle” offers can already be found in other movies, particularly “Insidious“. “Annabelle” does for haunting flicks what “No Good Deed” did for home invasions…Same shit, different title.

Violence: Rated R, although it could’ve easily gotten away with a PG-13.

Overall: “Annabelle” offers nothing new in terms of story or scares. It just wants to make a quick buck.