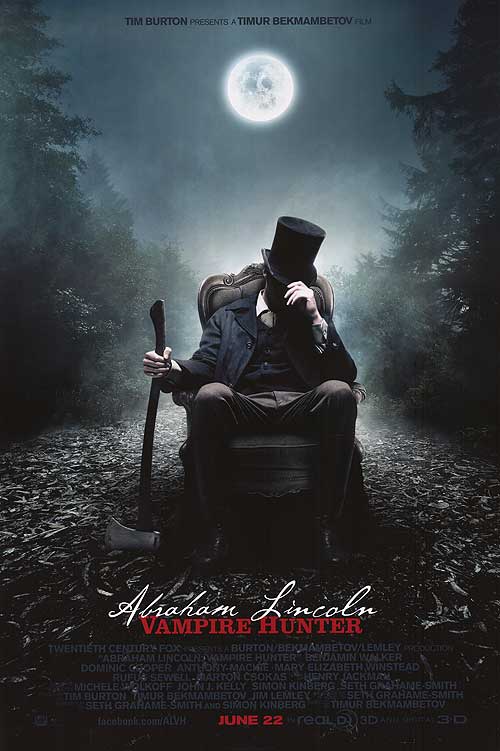 Plot: The iconic Abraham Lincoln (Benjamin Walker) becomes a fierce vampire hunter when he witnesses his Mother being murdered by one. It turns out that not only are vampires more common than one would like to think, but they survive by preying upon African Americans because no one would notice if a few slaves vanished. Soon, Abraham Lincoln decides that before he can stop the vampires, he has to stop slavery. Unfortunately, it will take a war against the Confederacy and the Undead to do it.

I had to wait awhile before writing a review on “Abraham Lincoln: Vampire Hunter” because honestly, I was having difficulty sorting out my feelings. I wasn’t in love with the movie. It has some glaring flaws, primarily surrounding its…faulty narrative. Yet it wasn’t a bad movie either. In fact, in many ways it was one of the more inspired movies of 2012. Yet I ultimately decided that the movies strengths and weaknesses crumbled under the might of its own gimmick. The idea of Abraham Lincoln slaying vampires makes me laugh. But do you know what’s funnier? The movie is dead serious about it.

At first, I was concerned. It seemed to me that the film was being a little generic with its set-up. Abraham is a kid who challenges intolerance, which leads to the death of his Mother. Naturally, he wants revenge and happens to stumble upon a vampire hunter (Henry; played by Dominic Cooper) who teaches him (and us) the ways of vampires and how to slay them. Nevertheless, it’s not for the sake of humanity that Abraham does this, but simply for revenge. It’s all a little forced and conventional. I didn’t really feel like it was Abraham Lincoln that was hunting, but instead it was just a pretty boy with familiar motives, character traits, etc. Abraham is told that he should have no personal connections, because he would just be endangering them. But then Mary (Mary Elizabeth Winstead) enters his life and they fall in love after three seconds. By this point, I was convinced that the filmmakers just took a typical vampire hunter movie and added Abraham Lincoln. What kept me going was the solid acting and the action. Speaking of which…

Timur Bekmambetov is a noted action director who delivered one of my favorite action movies of the decade, “Wanted“. He’s surprisingly restrained here, even though yes, all of his traits are present. Larger than life set pieces? Check? A camera that never seems to stop moving? Check. Lots of CGI infused with the action? Check. Editing that often seems to flow into one continuous take? Check. Some of this sounds bad, but Bekmambetov somehow makes it work. The CGI for example blends seamlessly and even when it doesn’t, he’s giving us a cool enough visual to make up for it. I appreciated that he more-or-less relies on different action and horror sequences, which create a chilling effect. He allows the suspense to breath so that there are some nail biting moments. He makes sure that there is a lot of color, even if those colors are often darker. As of now, the first act of the movie isn’t necessarily original, but Bekmambetov’s direction is so energetic and unique that it more-or-less made up for it. The action sequences might seem overly digital, but they find their flow and some of the techniques used are pretty damn impressive. One of my favorite moments is when a vampire blocks a characters knife by grabbing their wrist. What does the character do? Drop the knife and catch it with his other hand. The film is full of slick moments like that. It’s just too bad that the love story sequences burden the pacing, although there is a pay-off. I also managed to overlook some of the plot holes, like how come the vampires sense of smell is inconsistent and how is it that knowing about vampires seems to make you as strong as them. 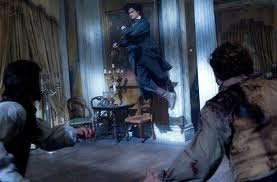 It’s honestly not until the movie decides to take a step back on the action and vampires, while focusing more on Abraham Lincoln as the President that the movie fully finds its stride. It’s no longer just a generic vampire story. Now they are exploiting the premise for all its worth. Now it is Abraham Motherf@cking Lincoln. Sure, the make up isn’t very good, but Walker fits the role perfectly by now and he really plays up how much the Civil War is breaking Lincoln down. You really feel his internal struggle here and I was sometimes wondering if they accidentally put in Spielberg’s upcoming Lincoln movie. The formerly weak love story actually becomes moving, thanks to Mary Elizabeth Winstead’s dedicated performance. They act like a real couple who are truly in love. Watching the political tensions increase as the vampires officially enter the war is oddly captivating and I felt like I was watching something different. Somehow, “Abraham Lincoln: Vampire Hunter” managed to fully explore the premise that its title offered. But what I loved about it was how sincere it was. There is no winking at the camera, nor were any tongues pressed against any cheeks. The movie is very solemn about their content and that rubbed off on me, allowing me to embrace it as something more than dumb entertainment. Yet more importantly, I thought that them playing it straight just made it more hilarious. During the movie, I was sort of distracted by the sudden shift in pace. It wasn’t until in retrospect that I realized that it also made the movie. Abraham Lincoln must free the slaves to stop the vampires from feeding upon them and somehow, the movie is believable at telling this story, which makes me laugh that much more.

Ultimately the film ends on a spectacular action sequence that was also side splitting. Watching old man Lincoln do all these flashy moves with his axe is just silly, which meant that I adored it. There are still flaws, but “Abraham Lincoln: Vampire Hunter” took its daft concept and turned it into a highly ambitious, almost original, vampire movie that also delivers some epic action and horror sequences. If you think that it just sounds too retarded, then maybe this isn’t for you. You might be bothered by the clunky pacing, the plot holes, the crappy old man makeup (or his friends lack of makeup) or maybe you’ll just find it tasteless and dumb. But for all of its faults, it is a film that strived to be something more than just a harmlessly enjoyable spectacle. It had all of the spectacle I wanted, but it also managed to have some heart, which amused me greatly. It did it at half the cost of your average blockbuster too. I suspect that when Spielberg’s Lincoln movie rolls around, I will be thinking: “Do you know what this movie needs? Vampires!“.

Note: It shall be listed under both horror and martial arts, because it has elements of both genres.

Nudity: You see the breasts of a dead woman.

Overall: I’d recommend “Abraham Lincoln: Vampire Hunter” as long as the viewer understands the faults involved. It’s not for everybody though. Personally, I thought it was funny because it was so unfunny.